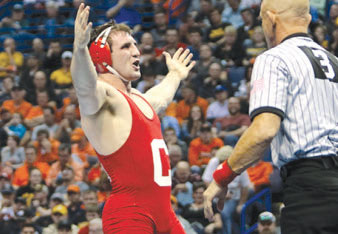 Gabe Dean ’16 won the NCAA Division I national championship at 184 pounds, leading the Cornell wrestling team to a fifth-place finish, its sixth top five showing since 2009. Dean closed the season with a 28-match winning streak, including a 6-2 victory over Lehigh’s Nathaniel Brown in the title tilt. Dean was one of four Big Red wrestlers to earn All-American along with Brian Realbuto ’16 (who finished second at 157), Nahshon Garrett ’16 (fifth at 125), and Chris Villalonga ’15 (sixth at 149). Earlier in the season, the Big Red also extended its record streak of Eastern Intercollegiate Wrestling Association titles to nine.

TO THE POINT Victoria Wines ’17 (right) won the gold medal in epée at the NCAA Northeast Regional Fencing Championships in March, topping a field of 58 competitors. As the number-three seed, Wines received a first-round bye then went 11-2 in the next two rounds. She secured the title by going 9-2 in the final round. In February, Wines finished fifth among 187 epée fencers at the 2015 Junior Olympic Fencing Championships in Richmond, Virginia. She also finished fifth out of 111 competitors in the epée at the USA Fencing North American Cup in January.

ON PITCH A valiant, but ultimately unsuccessful, effort to beat the number-one ranked college baseball team in the country resulted in Brian McAfee ’15 earning Ivy League Pitcher of the Week honors for March 4. McAfee held the University of Virginia scoreless over seven innings, allowing seven hits while never letting the Cavaliers get past second base. The Big Red led 2-0 when he left the game, but yielded four unearned runs in the eighth inning and lost 5-4. 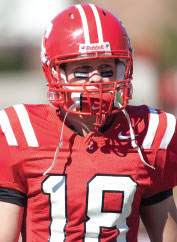 BOWL GAMER After being deactivated by the team before the 2014 Super Bowl, Bryan Walters ’10 (right) was on Seattle’s active roster for this year’s game. He returned two punts for a total of six yards and was also targeted for one pass as the Seahawks fell to the New England Patriots 28-24 in Arizona. During the regular season, Walters caught six passes for 57 yards and led the team with 27 punt returns for 207 yards.

SOCCER KUDOS Bruce Arena ’73 has earned one of the nation’s highest soccer honors: the Werner Fricker Builder Award, given annually by the U.S. Soccer Federation to someone who has worked tirelessly to further the interests of soccer without regard to personal recognition or advancement. Arena has been head coach of the L.A. Galaxy in Major League Soccer since 2008, leading the team to its third MLS Cup in the last four seasons in 2014. He also won two MLS Cup titles as head coach of DC United and was head coach of the U.S. National team from 1998–2006.

STICK WORK Two Cornell field hockey players have earned the right to compete on a bigger stage. Kelly Johnson ’18 was named to the USA Field Hockey Under-19 team that will travel to Belgium in April. Johnson started 11 games in goal for the Big Red last fall, posting an Ivy League best 1.22 goals against average. Sam McIlwrick ’18, meanwhile, was named to the 2015 Canadian Women’s Junior Dev­elop­ment Squad and will have the opportunity to represent her country at several events over the next two years. McIlwrick earned second-team All-Ivy honors last fall as a freshman and was named ECAC Rookie of the Week for November 11 after scoring three goals against Dartmouth.

LAX DRAFT Three Big Red players know where their professional careers will start after being selected in the Major League Lacrosse draft in January. Connor Buczek ’15 was the second overall pick in the draft, going to the Florida Launch. He’s the third Cornell player in the last nine years to go in the top two picks, joining Rob Pannell ’12, the first overall pick in 2012, and Max Seibald ’09, the second player selected in 2009. Matt Donovan ’15 went 18th overall to the Chesapeake Bayhawks while Jordan Stevens ’15 was taken three picks later in the third round by the Rochester Rattlers.

THE NEXT INNING Dick Blood has announced that the 2015 season will be his last as head coach of the softball team. Blood joined the program for its third season in 1996 and entered the current campaign with an Ivy League record 606 wins and five league titles. One of his former players, Julie Platt-Farlow ’97 (right), has been tapped to succeed Blood after spending 13 seasons as an assistant coach for the Big Red. Two other women’s programs recently named new head coaches. Trudy Vande Berg is the new head volleyball coach after three years as an assistant and one as interim head coach. Liz Dennison was named head coach of women’s rowing after six seasons as an assistant.

LUCKY NUMBER 28 Brian Ferlin ’15 became the 28th Big Red player to play in the NHL when he joined the Boston Bruins for a February 20 game against the St. Louis Blues. Ferlin began the year with the Providence Bruins of the American Hockey League after leaving Cornell following his junior season. He was a fourth-round pick by the Bruins in the 2011 NHL Entry Draft and scored 31 goals in three seasons on East Hill.