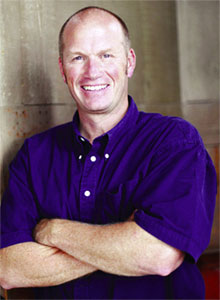 Six thousand feet up on Oregon’s Mount Hood, Jeff Kohnstamm is surrounded by history—both his family’s and that of the American Northwest. Kohnstamm is president of Timberline Lodge, a hotel and ski area built in the Thirties under the Works Progress Administration. The lodge, made of local timber and stone, was dedicated by President Franklin Roosevelt in 1937.

Now a national historic landmark, Timberline is owned by the U.S. government, administered by the Forest Service, and leased by Kohnstamm’s family firm, RLK & Company. The Hotelie grew up at Timberline and is the second generation to run the business; his father helped save the then-closed lodge from demolition in the Fifties. Kohnstamm, who has three children, hopes to pass its management on to a third generation someday. “The cool thing about working in the hospitality business is that it’s different every day,” observes Kohnstamm, whose firm also operates a nearby brewpub and condo resort. “We try to expect the unexpected.”

After working elsewhere in the hospitality industry, Kohnstamm took over management of the lodge in 1992. The seventy-one-room property plays host not only to skiers and snowboarders—who can hit the trails year-round— but to climbers, mountain bikers, wedding parties, and more. Many of the lodge’s guests return year after year. “The culture, history, and location of Timberline are neat,” Kohnstamm says, “but the most rewarding part is seeing people who have created family memories and traditions.” 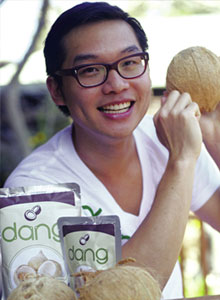 The first thing you notice is the texture—you bite down and it crunches,” says coconut chip entrepreneur Vincent Kitirattragarn. “Then a sweet smokiness permeates your mouth.” Kitirattragarn is the founder of California-based Dang Foods, which produces coconut chips sold in more than 500 stores nationwide. The lightly sweet chips can be used as a dessert topping, baked into pastries, or—Kitirattragarn’s favorite—eaten right out of the bag.

Kitirattragarn’s parents were born in Thailand, where coconut chips are a common snack. Dang’s coconuts are sourced there, then sliced, soaked in syrup, and slow-baked at a low temperature. “You have to take out all the moisture to get that crunch that so many people like,” Kitirattragarn says. The product has just three ingredients—coconut, sugar, and salt—though Kitirattragarn is experimenting with new flavors, such as salted caramel.

The former biological and environmental engineering major worked in sustainability for the City of New York before moving to San Francisco, where he sold home-cooked Thai food at farmers’ markets. While snacking on toasted coconut—an ingredient in his mother’s lettuce wraps—he realized that the chips weren’t well known in the U.S. “It’s a unique taste profile,” says Kitirattragarn, who launched his business in summer 2012. He chose the name “Dang” for two reasons. Not only is it named after his mother, he says, but it describes the reaction he aims for when people taste his chips: “Dang, that’s good!”