New biography of Kurt Vonnegut Jr. '44 is revealing but uneven

New biography of Kurt Vonnegut Jr. '44 is revealing but uneven

In January 1943, in the middle of his junior year, Kurt Vonnegut Jr. '44 dropped out of Cornell. He was flunking biochemistry and organic chemistry and—more important—he realized he would not be chosen editor-in-chief of the Daily Sun. Once an outspoken isolationist, Vonnegut enlisted in the Army. The war against the Nazis, he had decided, "was worth fighting."

Taken prisoner during the Battle of the Bulge, Vonnegut was a survivor of the fire-bombing of Dresden, Germany. He returned home with a subject to write about, but without a clear career path. After enrolling in and dropping out of the University of Chicago and working as a publicist for General Electric, Vonnegut decided to write full-time. He published a few science-fiction stories, but, according to Charles Shields, it would take Knox Burger '43, former editor of the Cornell Widow and, in 1949, an influential editor at Collier's magazine, to get him launched. 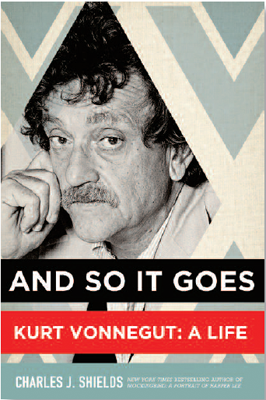 Shields is a journalist and the author of Mockingbird, a biography of Harper Lee. In his new biography of Vonnegut, And So It Goes (Henry Holt and Company), he draws on hundreds of interviews and a large cache of correspondence to provide a detailed, and not all that flattering, portrait of one of America's most popular "fabulators."

Born in Indianapolis, Indiana, in 1922, Vonnegut was an unhappy child, Shields suggests, scarred permanently by his family's loss of wealth and status in the Thirties and by the suicide of his mother. As an adult he could be funny, but was often sad and self-absorbed. The only thing he "hated more than listening to people," Vonnegut once said, was "talking to them." Apparently, he meant it—and he did not exempt his children, who received scalding rebukes when they wandered into his study.

Shields is not a literary critic. To be sure, he credits Vonnegut with broadening the genre of science fiction and observes, astutely, that in style and outlook, especially in Slaughterhouse-Five, Vonnegut borrowed more from Ambrose Bierce than from Mark Twain, the satirist with whom he is usually compared. Most of the time, however, his discussion of Vonnegut's novels does not extend beyond plot summaries and the identification of the "real life" models for his characters.

Kurt Vonnegut's work, Shields implies, does not require extensive analysis. Best understood as a "comic-didactic" rather than a "black humorist," Vonnegut tells morality tales (the critic Benjamin DeMott called them "bull session simplisms") about people struggling against corruption, oppression, and spiritual emptiness, often drawing on the imagination as their only weapon and sometimes accepting, wisely and without cynicism, their own powerlessness in a deterministic world.

Only mildly interested in politics for most of his life, Vonnegut was branded a left-wing firebrand, Shields points out, when the 1969 publication of Slaughterhouse-Five, which uses the Dresden bombing and Newton's Second Law of Thermo -dynamics to insist that "immoral acts cannot be undone," coincided, serendipitously, with some of the fiercest fighting of the Vietnam War. With good reason Vonnegut attributed his iconic status with young Americans to his insistence on addressing "sophomoric questions that full adults regard as settled" and for encouraging his readers "to make a better world." Vonnegut died in 2007, at eighty-four, from a respiratory infection and the effects of a bad fall outside his New York City apartment. "I'm old," he had told a reporter. "You ought to see what Mozart looks like by now."

Most of his books remain popular and in print. Given the war in Afghan i -stan, global warming, corporate corruption, and religious fundamentalism, Shields predicts, Vonnegut's fantastic morality tales—mixing humanism and existentialism, treating puzzlement and pain with an and-so-it-goes sigh—will "guide and inspire the next forward-looking generation." For better or worse, he may well be right.

Glenn Altschuler, PhD '76, is the Litwin Professor of American Studies, dean of the School of Continuing Education and Summer Sessions, and vice president for university relations.