Four years ago, Hod Lipson, an associate professor in the Engineering college, and Michael Schmidt '04, PhD '10, then a graduate student in his lab, asked a computer program they had created to explain a phenomenon that had taken scientists years to quantify: the motion of a swinging double pendulum. Twenty-four hours after the researchers fed the software the angles and angular velocity of the pendulum's segments, the computer spat out the Hamiltonian equation describing the total energy of the system's motion. Because the computer had been given no background data in mathematics or physics and had uncovered the formula from scratch, Lipson suspected it could solve other scientific problems. He was right.

Lipson named the software Eureqa and offered it free on the Internet; requests started pouring in from researchers and citizen scientists around the world. With nearly 20,000 users, this automated scientist has solved such simple problems as predicting traffic patterns—while also generating complex mathematical models that have proven incomprehensible. One researcher, Gurol Suel, a molecular biophysicist at the University of Texas Southwestern Medical Center, sent Lipson some data on the dynamics of a bacterium for an earlier version of the software to analyze. After Lipson input the data, a series of equations suddenly started popping out of the computer, describing how the cell worked. Yet the researchers had no clue how to interpret them. "We've been struggling for three years to understand what it means," acknowledges Lipson, who says he may have just recently discovered the answer. "Right now we're at this point where Eureqa is creating these formulas, but we really don't know what they mean. It's a strange place to be at, but I think it's a sign of things to come."

Inventing computers that can outwit scientists has long been a mainstay of science fiction—but in Lipson's Creative Machines Lab in Upson Hall, the phenomenon has become reality. Lipson, who earned his doctoral degree at the Technion-Israel Institute of Technology in his hometown of Haifa, began his journey toward building an automated scientist by fabricating a robot that could teach itself to walk. Called the Starfish, the robot could adapt to changes (such as having its leg sawed off) by reprogramming itself and running experiments that would allow it to continue moving. This led Lipson to create a robot that could breed new machines through a process of co-evolution. After designing a robot that could replicate itself and then make improvements by correcting defects, Lipson decided to make one that could create models of its observations—the same process that scientists use to explain the world. 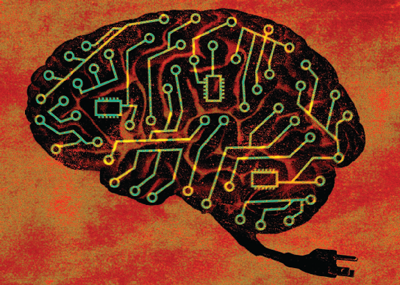 One of Lipson's collaborators is John Wikswo, a physicist and biomedical engineer at Vanderbilt University. With funding from several federal agencies, including the National Science Foundation and National Institutes of Health, Lipson and Wikswo are using automated software to infer models of complex biological phenomena—including the nature of drug addiction, the response of cells to pathogens, and the growth of yeast cells. What makes the research unique is that a newer version of Eureqa is analyzing the data being generated at Vanderbilt remotely at Cornell, a method Lipson calls "telescience." While the experiments are conducted at Vanderbilt, Eureqa controls the research via the Internet. "It's literally a scientist," Lipson says. "At the end of the day, it pops out three models that it has determined on everything it has seen. At that point, the [human] scientist has to show up and say, 'This doesn't make sense' or 'This model makes sense and we're going to publish it.' "

Incorporating machines like Eureqa into the research, Wikswo says, has the potential to revolutionize the way biologists work. "It may make biology experiments look more like particle physics experiments with their complexity," he says. "But biology is intrinsically complex, and it will take complicated machines to understand it." Lipson, who was recently named one of the world's seven most powerful data scientists by Forbes magazine, believes that automated scientists like Eureqa have the power to speed up the process of discovery—allowing scientists to solve problems that may be too complex for human understanding or that are impervious to traditional techniques. "It's definitely going to change how science is done in the future," says Lipson, who joined the Department of Mechanical and Aerospace Engineering and the Faculty of Computing and Information Science in 2001. "I don't think it will quite replace scientists, but it will accelerate the rate of discoveries and extend what scientists can do. It's really taking us to new frontiers."

Yet developing robots that can devise equations incomprehensible to humans is troubling to other scientists, who worry that human intelligence may be reaching its limit. In his essay "The End of Insight," applied mathematics professor Steven Strogatz writes that "insight is becoming impossible, at least at the frontiers of mathematics," and that he expects this problem will also afflict physics, biology, and the social sciences. Strogatz traces history from ancient times—when superstition and ignorance dominated—to the Enlightenment, when humans began to use math to explain the world. He concludes that we are now entering a third period when "the window is closing and the end of insight is approaching." Research such as Lipson's robotics, he writes, is proof that computers have overtaken human intelligence and are becoming all-powerful—and that, ultimately, "we'll be left in the dust." As he goes on to write, with pessimistic tongue in cheek: "I think the computers will be doing great science, but we hope that what they discover will be benevolent. If they find a cure for cancer, I hope that they will share it with us rather than obliterate the human race and take all the oil for themselves."