CAM: Although advances have been made in artificial legs, you noted in a story on "60 Minutes" that upper-extremity limb replacement hasn't much improved over what Captain Hook wore in Peter Pan. Why is that?

CAM: Due to the use of body armor, soldiers who would have died in previous conflicts are returning from Iraq and Afghanistan alive but missing limbs. Was that the major motivation for the project?

GL: We were not going to leave these young men and women without an appropriate limb replacement—and if one didn't exist, then someone had to invent it. So my leadership allowed me to create a program using DARPA's typical mission statement, which is not to let technology stand in the way. We put together a challenge to develop a replacement upper extremity—a five-fingered hand, a wrist that rotates, an elbow that bends, a shoulder that moves 360 degrees. We wanted it to be controlled as naturally as possible, so the wearer doesn't have to think about crazy things like twitching their back muscles, but rather think, "I want to grab a ball," and their arm reaches out and grabs it. That required tremendous advancements, both in engineering and in our understanding of human physiology and neuroscience. 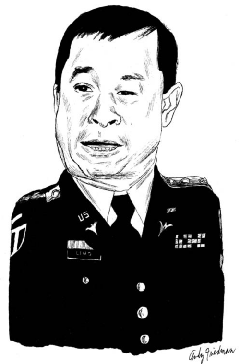 CAM: What kind of feedback are you getting from amputees who've been testing the arm?

GL: It's uniformly fantastic—beyond expectations. The arm is really a miraculous thing. This is a Porsche. It has independently moving fingers, a rotating thumb. It's a tremendous piece of equipment.

CAM: Will patients need surgery to control it?

GL: What I like about this is that it's a program of choice. A patient may say, "I want something I can just put on and get a good level of function." Well, they'll have it. Another patient may say, "I'm a concert pianist" or "Working a keyboard is critical to me," so they're willing to get surgery for a neural interface. All of these arms are modular; if you've lost your hand, your arm above the elbow, or your whole arm, we've got a replacement for you.

CAM: What's the timeline for the project?

GL: This is not an open-ended effort. We said, "You have to create the mechanical arm within two years"—twenty-four months. And the neuro-controlled arm had to be ready for clinical trials within four years. So this is not a project for the faint of heart.

CAM: Why did you join the military in the first place?

GL: After I earned my PhD, I did a postdoc at Sloan-Kettering and joined the Cornell faculty in the Department of Pharmacology. Then I decided to go to Georgetown medical school, but I didn't have the money. I joined the Army because they gave me a scholarship. That's the honest truth.

CAM: After you fulfilled your scholarship obligation, why did you remain in uniform?

GL: Around 2001 I was thinking about getting out. Then 9/11 happened, and it changed everything. So I stayed in, and it was a smart decision. I was able to respond meaningfully—to go to war and be a doctor for these kids, as well as do research that I think is going to help them and the world at large. The research that DARPA is enabling is not just for the military. This is the American taxpayer providing the resources, and American scientists and engineers providing the intellectual horsepower, to advance medicine in the whole wide world.

CAM: How would you describe your job at DARPA?

CAM: Could you talk about the head injury research you've also been overseeing?

GL: I helped run the ICU at a combat support hospital in Afghanistan in 2003, and in 2005 I was in Baghdad. One of the things that struck me were these terrible blast brain injuries. I thought about the lessons I learned under my Cornell professors; they would always challenge me to ask, What's the mechanism? What's the underlying process? So I took a look at this blast brain problem and said, "Where is the first principle?" Nobody knew. DARPA allowed me to start an effort to elucidate the basic mechanism. The researchers did over 240 separate blast experiments and defined what's a limited traumatic brain injury, what is moderate, what is severe. And they did this on the cellular, biochemical, macro-anatomical, and critical outcome levels—in twelve months. What DARPA does, DARPA does fast.

CAM: In a nutshell, what did the researchers learn about these types of injuries?

GL: They know when the brain starts to react negatively to a blast explosion. The first response is inflammatory, not unlike any other trauma, like spraining your ankle. Now they're developing therapeutic approaches. If your son or daughter has a mild brain injury from a sporting event, your local emergency department has nothing to offer. But at the end of next year, I bet the drug that we give to our soldiers will be available to kids who get soccer injuries. It might be something simple like Motrin. Can you imagine that? We're going to change the management of mild concussion because of the war effort.

CAM: What other projects are you working on?

GL: Something called PHD, Predicting Health and Disease. We wanted to figure out who would get sick before they got sick. The hypothesis was that your body changes subtly in response to diseases—so if I can find out what those changes are, then I can intercede at a much earlier point.

CAM: How did you test that hypothesis? GL: We took a group of healthy volunteers and exposed them to viruses. And get this: within a few hours of exposure, we can tell who will get sick and who will not—and who will ultimately become contagious. Imagine what it means for something like H1N1. If I knew you would be sick, I could treat you with Tamiflu right away—and I'd need a lot less to cure you because your viral load is so low. You'd never lose a day of work. Even though you were destined to be sick, I could change that by treating you early. It changes the definition of illness.