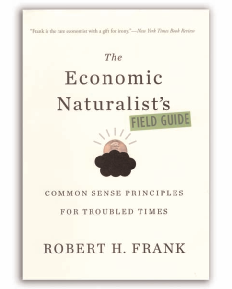 In a collection of columns from the New York Times, the Louis Professor of Management at the Johnson School gives his insights into the political, financial, and personal decisions that we face today. He characterizes waste as political malpractice and argues for efficiency as the best way to promote equity. “Self-interest is an important human motive, perhaps even the most important motive much of the time. But it is never the only important motive. And during some moments in history, narrow self-interest models miss the essential story line completely. This may be one of those moments.”

Jane Brody’s Guide to the Great Beyond by Jane Brody ’62 (Random House). The New York Times columnist provides a handbook to help people prepare for the end of life, advising on such topics as why a living will is not enough, designating a health-care proxy, discussing treatments with doctors, caring for the dying, considering hospice and palliative care, acknowledging when more treatment is fruitless, what to say to a dying loved one, planning a funeral or memorial, coping with grief, and leaving a lasting legacy.

Two Billion Cars by Daniel Sperling ’73 and Deborah Gordon (Oxford). Sperling, the founding director of UC Davis’s Institute of Transportation Studies, and Gordon, a senior transportation policy analyst, recognize that the automobile isn’t going to go away, but they contend that the worldwide growth in the number of cars and the lack of alternative transit has resulted in a “transportation monoculture.” They call for more energy-efficient vehicles, low-carbon fuels, entrepreneurs who foster innovation, and government policy that invokes the public interest

Genius of Common Sense by Glenna Lang and Marjory Wunsch ’64 (Godine). In a book for young readers, biographers Lang and Wunsch record the life of Jane Jacobs from her early days in Scranton, Pennsylvania, to her work in preserving urban environments. Jacobs spoke out against urban renewal projects that destroyed or fragmented neighborhoods and organized New Yorkers to save the West Village and stop the Lower Manhattan Expressway. In her classic book, The Death and Life of Great American Cities, she opposed the indiscriminate use of the wrecking ball.

Don’t Swallow Your Gum! by Dr. Aaron Carroll and Dr. Rachel Vreeman ’98 (St. Martin’s Griffin). Despite the large amount of medical information that’s available to the public, misunderstandings about health and the workings of the body persist. For example, sugar does not make children hyperactive, using antiperspirants does not cause cancer, you don’t have to wait an hour after eating before swimming, and nails don’t keep growing after death. Two professors of pediatrics at the Indiana University School of Medicine dispel these and other myths.

Le Journal de Charles Swann by D. I. Grossvogel (Buchet-Chastel). The Goldwin Smith Professor of Comparative Literature and Romance Studies re-imagines Proust’s In Search of Lost Time through the mind of one of its main characters.

Equilibrium, Trade, and Growth edited by Tapan Mitra and Kazuo Nishimura (MIT). Mitra, the Goldwin Smith Professor of Economics, and Nishimura, director of the Institute of Economic Research at Kyoto University, trace the development of Lionel W. McKenzie’s neoclassical economics.

The Indonesia Reader edited by Tineke Hellwig and Eric Tagliacozzo (Duke). A professor of Asian studies at the University of British Columbia and a professor of history at Cornell select chronicles, stories, articles, poems, and photographs that demonstrate the complexity of the fourth most populous country in the world.

The Business Guide to Legal Literacy by Hanna Hasl-Kelchner, MBA ’78 (Jossey-Bass). A corporate attorney helps managers and executives develop a better understanding of the law through a structured approach to risk management.

The Angry Smile by Jody Long, Nicholas Long, and Signe Whitson ’95 (Pro-Ed). The authors provide strategies for working with or responding to people who exhibit passive-aggressive behaviors.

America’s Waterfront Revival by Peter Hendee Brown, BArch ’85 (Pennsylvania). Port authorities have been instrumental in urban development, argues Brown, an architect and planner who teaches private sector development at the University of Minnesota.

Golf in America by George Kirsch ’67 (Illinois). A professor of history at Manhattan College chronicles the popularity of the sport and argues that it has always been a game for the people.