Mac Bishop’s high-end men’s clothing firm has garnered headlines in media like CNN, the Huffington Post, Fast Company, and . . . Sheep Industry News? The 2011 CALS alum was featured in the ovine-centric periodical for founding Wool & Prince, an Oregon-based retailer that makes button-down shirts and other apparel from fine merino wool. Launched in 2013 when Bishop was living in Brooklyn, the online haberdashery made a splash with a Kickstarter campaign that went viral, in large part because of Bishop’s unorthodox one-man field test: he wore a merino button-down for 100 days straight without washing it, periodically asking strangers on the streets of New York to give it a sniff test. (It passed.)

Bishop in Wool & Prince’s small showroom in Portland, Oregon, which is currently the online retailer’s only brick-and-mortar space.Christopher J. Scott

The sartorial stunt got people talking; both Leno and Letterman cracked jokes about it, and Bishop did interviews with media as far away as Australia. The Kickstarter raised nearly $315,000—it would likely have gone higher, but he closed it to ensure he could fill the orders—and enabled him to start the company, which he eventually relocated to his native Portland. “I have to admit, there were some nights when I went to bed thinking, I’m not sure I can wear that shirt tomorrow,” says Bishop, who’d even don the garment to bike home drenched with sweat after playing basketball. “But the beauty of wool is that it’s incredibly breathable, and it airs out really well.”

Bishop knows his material. As Sheep Industry News noted, he’s “essentially royalty in the American wool industry”—a sixth-generation member of the family behind Portland-based Pendleton Woolen Mills, which traces its roots to 1863. (His father, C. Morton Bishop III ’74, recently retired as company president; the shirt Bishop wore in his 100-day test was a custom-tailored garment from the Sir Pendleton line.) In launching Wool & Prince, Bishop aimed to create a no-hassle alternative to the business-casual button-downs sported by male office workers everywhere—garb from purveyors like Brooks Brothers and J.Crew that can generally be worn only once or twice between launderings. “There was a huge gap in the marketplace,” Bishop recalls. “Merino wool was becoming increasingly popular with the outdoor community—people would take one pair of merino long johns on a weeklong ski trip—but no one was focusing on it for the business casual category. I wanted to design 100 percent merino shirts that no one would notice were wool.”

As Bishop notes, selective breeding of sheep (particularly in Australia and New Zealand) has driven major advancements in wool quality and softness; today’s fine merino, he says, is “a long way from the wool of the 1950s that your grandma used to knit sweaters out of.” Working with a mill in Shanghai that specializes in producing fabric for men’s suits, Bishop developed materials that he calls the best of both worlds: the finished product, he says, “looks like your standard cotton shirt that you’d wear to work, but it performs like a wool garment, so it’s odor and wrinkle resistant.” Those nose-friendly qualities have been validated by research: in the company’s early days, as part of a program to aid New York State start-ups, a Cornell fiber scientist conducted a simulated “sweat test” that entailed growing bacteria on various fabrics, including a Wool & Prince dress shirt. She found that while the organisms thrived on cotton and polyester, there was almost none on the merino. “The products are outstanding,” says Dyson School professor Deborah Streeter, Bishop’s former adviser and a longtime mentor. “They really do what they say they’re going to do. Every man in my life has them.” 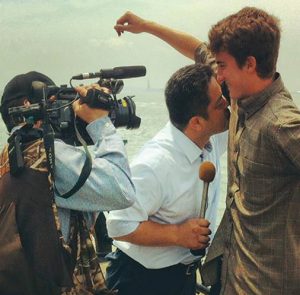 Bishop gets an olfactory inspection during his “hundred-day challenge.”Provided

Wool & Prince’s garments come at a luxury price point: a button-down or dress shirt costs $128, and those from the company’s “Made in USA” line—in which all the materials and labor are domestically sourced—are $168. (Wool & Prince also sells other wardrobe items including short-sleeve button-downs, T-shirts, Henleys, polos, boxer briefs, and socks, and recently added women’s dress shirts.) But Bishop—who was schooled in the financial demands and logistical hassles of workplace attire during a stint at Unilever after graduation—stresses that part of the company’s ethos is to allow men to strip down their wardrobe, buying fewer items in total and laundering them much less often. “We like to say that one of our shirts can replace multiple normal cotton shirts,” he says. “We have people who tell us, ‘The amount of money this shirt has saved me in dry cleaning bills is six times what I paid for it.’ ”

The concept of simplifying one’s wardrobe—and life overall—is the focus of an online community that Bishop founded, he says, “for guys who want to live with less.” The site, called Only What Matters, is also home to Bishop’s blog espousing the value of minimalism; it includes such content as a lighthearted description of the six days that he and his wife spent living in a van during their honeymoon in Norway last summer. “I knew from fairly early on that Mac was going to have an interesting journey—he wasn’t going to go the standard route,” Streeter says. “He’s got this combination of personal philosophy, design aesthetic, and a big entrepreneurial drive. He’s a happy, generous, wonderful person with a great sense of humor, and he’s very playful and creative. It really fits the niche he’s in.”

Speaking of Bishop’s recent nuptials: surprisingly, he didn’t wear a Wool & Prince shirt for the ceremony. (As he explains, he wanted to get married in a pure white shirt, something not yet possible with merino, to his enduring chagrin; he did sport his company’s socks and boxers.) He also notes that during the wedding festivities, his new relatives ribbed him mercilessly about his dogged fondness for a certain Wool & Prince burgundy button-down. “I got roasted by my in-laws for wearing the same shirt pretty much every time I saw them,” he says with a laugh. “The thing is . . . they had photographic evidence.”

One thought on “Baa-ed Company”