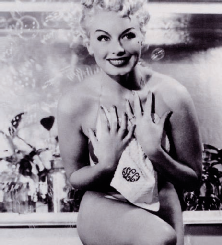 Small-town girl Marie Van Schaack transformed herself into the burlesque queen Lili St. Cyr, one of the most popular and glamorous striptease dancers of the Forties and Fifties. St. Cyr rarely acknowledged the audience and preferred to keep her distance on stage as a way to reinforce her mysterious femme fatale image. She inspired Marilyn Monroe and the burlesque revival of Madonna and Dita Von Teese. While the men of burlesque—Jackie Gleason, Phil Silvers, and Abbott and Costello—were celebrated outside of that world, the women rarely were. Freelance writer and former Cornell Alumni Magazine intern DiNardo corrects that focus as she traces the trajectory of St. Cyr's career in nightclubs and films, her six marriages, and her later descent into poverty and drug addiction. "In many ways, she lived a sexier, bawdier Cinderella tale. Instead of an invisible fairy godmother with a magic wand, she used the sexy twirling of her G-string-clad hips to pull herself up from a working-class life to inhabit a real bejeweled, fur-draped world."

Keeper and Kid by Edward Hardy '79, MFA '88 (Thomas Dunne Books). Thirty-something James Keeper has a good life in Providence helping to run an "antique store salvage yard empire." But when his ex-wife suddenly dies, a bomb goes off in his life: he discovers that he is the father of a three-year-old son and must take on the difficult task of parenthood.

Minority Rules by Kenneth Arroyo Roldan '86 and Gary M. Stern (Collins). Moving up the corporate ladder takes hard work, persistence, and connections, but for people of color, it's even tougher. The CEO of an executive recruiting firm that has placed minorities in top positions offers insights into how the corporate world works and strategies for surmounting obstacles to advancement.

Birder's Conservation Handbook by Jeffrey V. Wells, PhD '95 (Princeton University Press). Birds serve as indicators for many environmental problems that affect us. Wells, the senior scientist for the Boreal Songbird Initiative and former director of bird conservation for the National Audubon Society, spotlights 100 North American bird species that are of conservation concern, detailing the major causes of population declines and what is being done to reverse those trends.

A Little Trouble with the Facts by Nina Siegal '91 (Harper Collins). Valerie Vane was once a promising reporter for a New York City newspaper's style section; now she's been demoted to the obituary desk. After she writes about the alleged suicide of graffiti artist Malcolm Wallace, she starts receiving calls from a man who urges her to be a reporter again and investigate Wallace's murder.