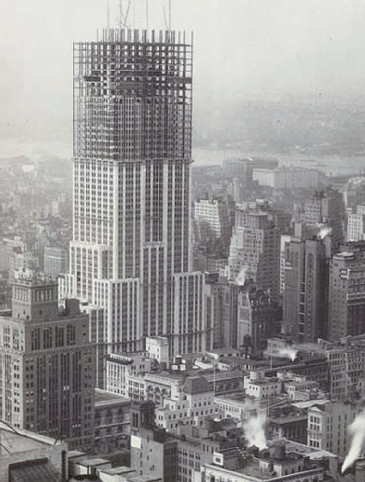 Seventy-five years ago, a very large ape scaled what was then the tallest building in the world, swatting biplanes and making eyes at a blonde. But Richmond Harold Shreve 1902, one of the Empire State Building's architects, was hardly one to monkey around. He orchestrated 60,000 tons of steel and 3,000 workers to raise the skyscraper at an unprecedented rate of four-and-a-half stories a week, not only completing it on time (in 1931) but coming in ahead of schedule. He and his partners at the firm of Shreve, Lamb & Harmon charted each piece from design to placement to prevent delays. Shreve viewed the construction as "a great assembly line—only the assembly line did the moving; the finished product stayed in place."

Although William Lamb designed the building, the narrow window sills and limestone façade were Shreve's ideas—to lower costs and speed construction. As he once wrote: "Finance dictates the fenestration." Shreve went on oversee the New York City housing projects that set the standard for the next generation of urban renewal, and the firm later designed Olin, Kimball, and Thurston halls on the Hill. A 1941 interview in the Architectural Record noted that "order, forethought, and system are words that might be his middle name."

Until it was eclipsed by the World Trade Center in 1972, the Empire State Building towered above every skyscraper on the planet. With the Twin Towers destroyed, it's again the tallest building in Manhattan—at least until the controversial Freedom Tower is built. When the new project is completed in 2010, it will mark the tragedy that took place there fifty-five years and one day after Shreve died—on September 10, 1946.