Seven years ago, the costumes worn by the Big Red Bears were beginning to look a little, well… threadbare. The Class of '70 jumped in to help, purchasing new bear suits in memory of a classmate and former Big Red Bear named (aptly enough) Jeff Baer. This year, they took it a step further. When the class officers met at the Cornell Alumni Leadership Conference in January, vice president Sally Anne Levine '70, JD '73, suggested that they look into endowing the Big Red Bears as a class gift. The idea got enthusiastic support from John Foote '74, the author of Touchdown: The Story of the Cornell Bear, and Cindy Marinaro '12, current president and spokesperson for the Big Red Bears. With help from Margaret Gallo '81 in Alumni Affairs and John Webster in Athletics AA&D, the idea became a plan—and now it's an endowment. Thanks to a $22,500 gift from the Class of '70, the Big Red Bears will have annual income of about $1,000 to cover cleaning, repairs, and other expenses associated with ursine life. "We felt that the Big Red Bears Gift and Memorial was a lively, fun, and ongoing way to honor the Class of '70, our classmates who have passed on, and the University community," says class president Connie Ferris Meyer '70. "The Big Red Bears are enjoyed by students, alumni, faculty, and staff, and this is a wonderful legacy for our class." 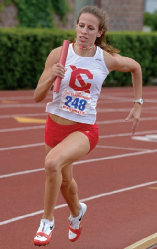 WORLD CLASS By winning the 1,500 meters at the USA Track and Field National Championships this summer, Morgan Uceny '07 has continued to distinguish herself as one of the top middle-distance runners in the world. Uceny, who also won the 2010 national indoor title in the 1,500, came from behind to win the outdoor crown, taking the lead in the final 80 meters before winning by two seconds with a time of 4:03.91. After that, she posted several impressive wins in Europe and was selected to represent the United States at the International Association of Athletics Federations World Championships in South Korea.

HEAD GAMES In an effort to better protect football players from concussions, the Ivy League will reduce the number of full-contact practices this season. Teams will be limited to two full-contact practices a week during the season, half of the previous limit and three less than allowed by NCAA rules. They must also reduce the number of full-contact sessions during spring practice and are limited to one full-contact practice each day during the preseason. These changes, along with increased education efforts, were recommended by a special committee headed by Cornell president David Skorton and Dartmouth president Jim Yong Kim, both medical doctors. The Ivy League indicated that it will research similar changes for men's and women's ice hockey, lacrosse, and soccer.

HOCKEY HALL After being selected in just his second season of eligibility, Joe Nieuwendyk '88 will be inducted into the Hockey Hall of Fame in November. A two-time All-American as well as an ECAC Rookie of the Year and Player of the Year at Cornell, Nieuwendyk went on to play 20 seasons for five NHL teams, winning three Stanley Cups. He was also a member of two Canadian Olympic teams, including the gold medal team in 2002. He is currently the general manager of the Dallas Stars.

DRAFTEES For the first time in five years, a Cornell player was selected in the Major League Baseball Amateur Draft. Right-handed pitcher Jadd Schmeltzer '11 was taken by the Boston Red Sox in the 49th round. He was assigned to the Red Sox Gulf Coast League rookie team in Fort Myers, Florida. Incoming freshman Roberto Suppa '15 was also selected, taken in the 26th round by the San Diego Padres. A native of Palgrave, Ontario, the six-foot-five right-handed pitcher was a member of the Canadian National Junior team.

BEAR & BULLDOG Big Red rower Leigh Archer '13 teamed with Yale's Dara Dickson to win a gold medal in the senior women's pair during the US Rowing Club Championships this summer. The duo won by a margin of nearly nine seconds, covering the 2,000-meter course in 7:57.11.

NEW LOOK Two new assistant coaches have joined the men's hockey staff, although one is a familiar face. Ben Syer and Topher Scott '08 will be behind the bench this season, replacing former assistants Casey Jones '90, who became head coach at Clarkson, and Scott Garrow, who took an assistant's position at Princeton. Syer was an assistant coach at Quinnipiac for the past 12 seasons, while Scott, a four-year letter winner at Cornell, was a volunteer assistant at Miami University (Ohio) last year after playing professionally for three seasons.

TRANSITION After 21 incredibly successful seasons as head coach of the women's track and field and cross country teams, Lou Duesing is stepping down to become a part-time assistant coach and handing the reins to Rich Bowman, his longtime assistant. Duesing's teams won 25 Heptagonal Championships, far more than any other school during that span, and the cross country team posted three straight top-four NCAA finishes. Bowman has been an assistant for the past 31 seasons, working primarily with the sprinters, hurdlers, relays, and multi-event athletes.