As we begin the 2011-12 academic year, we welcome the sesquicentennial class, which will graduate at the University's 150th birthday in 2015. We are also preparing for the transition in leadership of our Board of Trustees from the extraordinarily capable Peter Meinig '61, BME '62, to the equally capable Robert Harrison '76, who will become chair on January 1, 2012.

Cornell has been fortunate since its founding to have had excellent leadership on and by its Board of Trustees, including emeritus chairs Austin Kiplinger '39 and Harold Tanner '52, who remain inspirations for their service and contributions to Cornell. I have no doubt that Pete Meinig will also take his place in history as one of our great board chairs.

A trustee for two decades and board chair since 2002, Pete has guided Cornell with great vision, discipline, and wisdom through unprecedented challenges, including the Great Recession and its fallout. Before being elected board chair, Pete served as chair of the Executive Committee—and he helped move Cornell into the world of online education as a founding member and former chair of eCornell's board of directors.

Pete and his wife, Nancy, a 1962 graduate of the College of Human Ecology, revitalized the Parents Fund back in the Eighties, during their years as Cornell parents, and Pete co-chaired the scholarship campaign that concluded in December 1999. They continue to be involved with students through their support of the Meinig Family National Scholar Program, which they endowed in 1999 and which helps selected Cornell students develop their potential as leaders through executive mentoring, support for internships and experiential learning, financial aid, and other benefits. 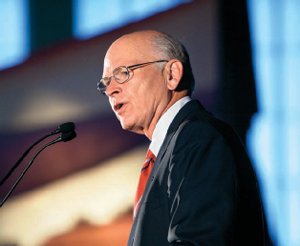 Devoted alumni leaders and wonderful mentors, guides, and dear friends, Pete and Nancy have taught Robin and me about the traditions of Cornell. Those of you who attended the State of the University Address during Reunion 2011 heard me talk about my vision for Cornell in four key areas that have characterized the University in past years and that are the keys to our future: access, globalization, public engagement, and faculty renewal. Part of the way we are honoring our heritage as we approach Cornell's sesquicentennial is by making these four enduring characteristics priorities for the future.

There is no doubt that we are a better, stronger university because of Pete and Nancy Meinig, and we are very grateful that they have agreed to serve as co-chairs of the sesquicentennial, working with the committee that will plan and coordinate Cornell's 150th birthday.

Like Pete, Bob Harrison has a distinguished history of involvement as a Cornell trustee. A student trustee as an undergraduate, Bob rejoined the board in 2002 and has since served on numerous committees, most recently as chair of the Executive Committee. Bob is a lawyer, a former Rhodes Scholar, and a retired managing director of the Goldman Sachs Group. He currently is chief executive officer of the Clinton Global Initiative, established by former President Bill Clinton in 2005 to devise innovative solutions to some of the world's most intractable challenges. He is an enormously capable leader—with deep knowledge of business, the law, the public sector, and Cornell.

Alfred North Whitehead, the British mathematician and philosopher, once observed: "The art of progress is to preserve order amid change and to preserve change amid order." As we prepare for our sesquicentennial, I look forward to a smooth transition from the Meinig era to the Harrison era of board leadership as we implement the changes necessary to create an even better future for the University while enhancing the distinctive characteristics—access, globalization, public engagement, and faculty renewal—that are central to our Cornell.

In my next column, I will reflect on some of the issues that I expect to be on the board's agenda as we head into the new year under Bob Harrison's leadership. I invite you to keep abreast of the changes in board leadership and to take part in the future of Cornell.