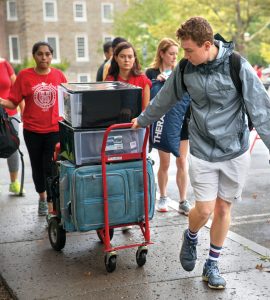 Each fall, some 4,000 new students arrive on the Hill to begin their Cornell careers—bringing with them not only their hopes for a fulfilling college experience, but carloads of furniture, books, electronics, and enough clothes to last through their first semester. And every year, this great migration goes off more or less without a hitch, thanks to a cadre of dedicated staffers and carnelian-clad volunteers. From directing traffic to schlepping countless boxes to giving tours of campus, hundreds of Cornellians come together to welcome these first-years and transfer students. “We go all out,” says Peggy Arcadi ’85, director of New Student Programs. “They won’t remember everything, but we hope they come away with an understanding that they’re in a community that cares about them.”

When it comes to the logistics of moving thousands of students and their possessions into their dorms, organizers have long had the process down to a science. This semester, though, things got a little more complicated, thanks to the construction project that’s set to add approximately 2,000 beds on North Campus. While the entire move-in process had previously been held on a single day, this fall it was expanded to two—with a more precise system in which families arrived at a staging area, drove to the dorms in small groups, and were greeted by volunteers and professional movers. “This is too big to fail,” says Karen Brown, director of Campus Life Marketing and Communications, who co-chairs the move-in committee, “so we’re always going to make it work.”

After the new students have had a chance to find their dorms and meet their roommates—and for many, take their mandatory swim test—they make their way to Schoellkopf Stadium for Convocation. Orientation’s official kick-off, it includes words of wisdom from President Pollack and other staff, faculty, and student leaders. “Be sure to cherish those who join you on your journey,” Ryan Lombardi, vice president for student and campus life, told the Class of 2022 last fall. “These folks are not your competition. They are your Cornell family. Lift each other up and help each other become your best selves, together as a community.” 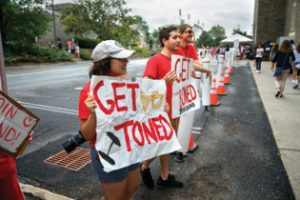 Over the course of the next few days, first-years and transfers are mostly free to explore campus, choosing from a long list of activities organized by the University or various student groups. The offerings typically include a stroll through the Botanic Gardens, tours of the many libraries, an open paddle on Beebe Lake, and a guided walk through the campus gorges. Marching Band auditions are held behind Schoellkopf; would-be exchange students can attend a study-abroad open house; lecturers offer advice on “Everything You Need to Know About Being a Cornellian.” An annual field day event—complete with kickball, volleyball, and a DJ—takes over a North Campus quad for an afternoon, and there’s no shortage of ice cream socials and Chimes concerts. In the evenings, a capella groups sing beneath the Balch Arch, and Cornell Cinema offers free screenings of Hollywood hits. Among Orientation’s few mandatory activities are viewing a gorge safety video (which can be done online) and attending a session of the Intergroup Dialogue Project, a program that aims to enrich students’ communication skills across differences in race, culture, socioeconomic class, and more. On the final day of Orientation, the freshman class gathers for a massive group photo. “It’s so nice for them to have campus to themselves for a few days,” says veteran Orientation volunteer Abi Cherry ’20. “They can enjoy Cornell like a playground and really explore it.” 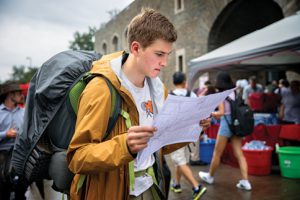 To ensure some individual attention, groups of about a dozen new students are paired with an Orientation leader from their college. Throughout the week, they meet to discuss college-specific requirements and take tours of the buildings where most of their classes will be held. Leaders often share their own experiences; Cherry, for example, usually lets her group know that she’s on financial aid and offers tips on finding cheap meals on campus. “Our job is to get across a sense of belonging,” says Rohan Yaradi ’21, co-chair of the Orientation Steering Committee (OSC), the student-run organization that plans many Orientation events and recruits and trains volunteers. “We want them to know they are not here by accident. They earned their way here, and this community will be here for them through thick and thin.” But as many Orientation organizers note, it’s often not the incoming students who need the most hand-holding—it’s their parents, who can be more than a little anxious about saying goodbye. “My favorite job during move-in is to sit and chat with the parents,” says Cherry. “The kids might not remember you; they’ve got a lot going on. But if you make a parent happy, they’ll remember that their child is in a good place.”

While the fall Orientation is by far the major one, a smaller version is held each January for the roughly 200 transfer students and first-years admitted for spring semester. With warm-weather activities off the menu, the new Cornellians are welcomed with hockey games, dance parties in Barton Hall, and craft nights on North Campus. “It’s definitely more intimate,” says Yaradi, himself a spring semester arrival. “It’s more about meeting people rather than getting to know campus.”

Orientation has changed significantly over the years, both in duration and in content; Arcadi notes that back in the Sixties, it included a freshman cocktail party. In decades past, incoming classes were small enough that everyone could gather for barbeques at nearby state parks. Greek rush used to start the day freshmen arrived; it’s now a semester later to give students a chance to settle in. And in what was arguably Orientation week’s most stressful element, students would have to register for classes in person—waiting in long lines in Barton, hoping their desired classes wouldn’t be full by the time they reached the front. (Now, of course, the entire process happens online weeks before the semester starts.) But the fundamental spirit of Orientation has remained the same. “We had marvelous opportunities to hear and learn about the various activities at Cornell besides the academics,” Kent Hewitt ’59, BA ’60, recalls of his Orientation in 1955. “We heard songs from the Glee Club, Cayuga’s Waiters, the Cornell Chorus, and the marching band all during that week. We were fired up with the spirit of Cornell like you wouldn’t believe.”

Nowadays, incoming students can explore much of Cornellian culture before they even set foot on campus. Most pre-frosh “meet” their roommates through social media weeks in advance. Cornell’s “New Students” website is a font of information on topics ranging from fitness centers to counseling services to how to prepare for Ithaca winters; the Cornell Connects app offers a schedule of Orientation events and maps of campus. Some incoming students even elect to join the University community over the summer by participating in pre-Orientation events such as volunteer trips, retreats with religious organizations, or student-led wilderness experiences such as canoeing in the Adirondacks. All in all, Arcadi says, an estimated 21,000 annual volunteer hours go into planning and executing Orientation, with each of the OSC’s dozen members putting in about 400 volunteer hours a year. “The whole experience gives me such a boost every single semester,” says Cherry. “I leave the week feeling like Cornell is just the greatest.”