To the delight of many, Wine Enthusiast magazine has named the Finger Lakes region one of this year’s ten best wine travel destinations. “Known particularly for world-class Riesling, it’s also home to an increasingly diverse array of wines, from Grüner Veltliner to Teroldego,” the magazine notes in its February 2015 issue. The Enthusiast also cites scenic beauty and an evolving food scene as two more reasons for visiting the area. The article lists a dozen wineries of particular interest, including stalwarts Hermann J. Wiemer and Dr. Konstantin Frank as well as newcomers like Kemmeter, Keuka Lake Vineyards, and Bellwether. It praises the improving quality of Finger Lakes reds and deems them increasingly distinctive in style and worthy of attention.

Back in 1976—the year of the New York Farm Winery Act—it would have been tough to imagine this degree of enthusiasm for Finger Lakes wine expressed in a national publication. At that time, Dr. Konstantin Frank’s Vinifera Wine Cellars and Gold Seal Winery were virtually the region’s only producers of wine made from vinifera grape varieties such as Riesling and Chardonnay. They were soon to be joined by the likes of Heron Hill Winery, Glenora Wine Cellars, and Hermann J. Wiemer Vineyard, slightly increasing the size of a tiny playing field.

Today, there are well over 100 wineries located in the Finger Lakes. Positive reviews in publications such as Wine Enthusiast, Wine & Spirits, Wine Advocate, and Wine Spectator have raised their reputation. The latter, the highest circulating wine publication in the U.S., issued its first full tasting report on the Finger Lakes in a winter 2013 issue. In recent years the Spectator has reviewed increasing numbers of Finger Lakes wines, and its website now contains more than 2,500 searchable reviews of the region’s offerings. In March, Robert Parker’s influential Wine Advocate—whose coverage of the region has been spotty at best—announced that a critic would be assigned to cover the Finger Lakes. Additionally, tasting notes posted on wine-related forums such as Mark Squires’ Bulletin Board and Wine Berserkers have piqued the interest of wine aficionados across the nation.

But perhaps the best way to keep up on what’s happening in the Finger Lakes is by perusing the excellent New York Cork Report blog. Its main contributors are Lenn Thompson, former editor of the Long Island Wine Gazette, and Evan Dawson, author of Summer in a Glass, an excellent book about Finger Lakes wine. Founded in 2004, the blog follows all of the state’s wine regions, and its coverage of the Finger Lakes is particularly timely and incisive. The reviewers are refreshingly miserly with their ratings: if a wine is well reviewed by these guys, it’s definitely worth investigating.

A sampling of the Rieslings from any of these producers would certainly make for an exemplary introduction to the wines of the Finger Lakes. One could add to Pigott’s list many other notable Riesling producers including relative newcomers such as Forge, Heart & Hands, Keuka Lake Vineyards, Red Tail Ridge, and Boundary Breaks as well as seasoned veterans like Hazlitt, Glenora, Heron Hill, and Lakewood. “There is fine potential here for the aromatic varieties of Alsace and Germany,” says Dave Breeden, winemaker for Cayuga Lake’s Sheldrake Point Winery, “not just Riesling, but Pinot Gris and Gewürztraminer as well.”

Konstantin Frank’s grandson Fred Frank, while producing excellent Gewürztraminer, is particularly excited over the prospects for the Austrian Grüner Veltliner grape. Frank, now President of Dr. Konstantin Frank’s Vinifera Wine Cellars, feels strongly that the variety is capable of producing some of the finest wines in the Finger Lakes. He puts his money where his mouth is, as he now has more than ten acres of it planted on his Seneca Lake property. And in a 2014 blind tasting of Austrian and Finger Lakes Grüner Veltliners at Ithaca’s Northside Wine & Spirits, the Dr. Frank Grüner acquitted itself nicely, its style indistinguishable from the Austrian examples. Other wineries producing this variety include Ryan William, Hazlitt, Fulkerson, and Hermann J. Wiemer. 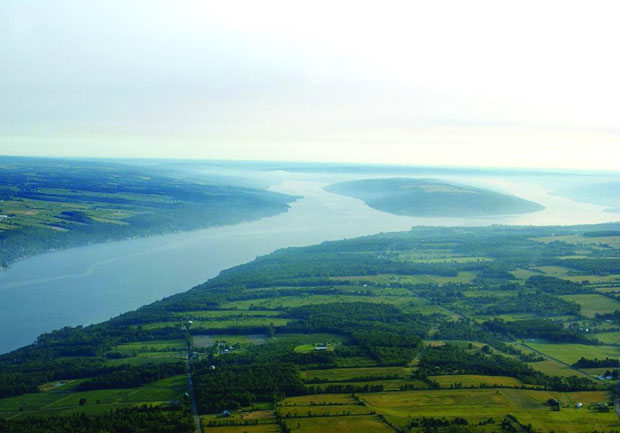 Reds on the Rise

While the quality of the best Finger Lakes white wines is not disputed, the region’s reds are perhaps more of a work in progress. In general, it is safe to say that they are improving, though opinion is still divided on which varieties show the most promise. There are, broadly speaking, two camps: the Cabernet Franc advocates and the pro-Pinot Noir contingent. Those favoring the juicy, red-fruited Cabernet Franc would say that the area’s cool climate is just the thing for producing wines in the style of those made from that variety in the cool Loire Valley of France, where it is the single grape used to produce wines such as Chinon and Saumur-Champigny.

Cabernet Franc has certainly seen some great success in warmer vintages such as 2007, 2010, and 2012. Particularly good examples have emanated from Ravines, Hermann J. Wiemer, Shalestone, Red Newt, Damiani, Bloomer Creek, and Atwater, among others. In a blind tasting of French and Finger Lakes Cabernet Franc wines at Northside, the deeply fruited Wiemer 2012 tied with a very good Chinon for top honors.

Results with Pinot Noir have been a bit spottier, which may have as much to do with soil as climate. Pinot Noir likes limestone, and it is notable that one of the most successful Pinot producers, Heart & Hands, has its estate vineyards planted on limestone-rich soil. Based on owner-winemaker Tom Higgins’s successful efforts, the key to future successes with the grape will depend on finding sites that combine a warm enough microclimate with limestone-rich soil. Forge, Damiani, Shalestone, Billsboro, Bloomer Creek, Bellwether, and Ryan William have also produced successful Pinots.

A third variety favored by some producers is Syrah. This smoky, dark-fruited variety seems to do particularly well in Jim Hazlitt’s Seneca Lake Sawmill Creek Vineyard. Other wineries that have had success using Sawmill-grown Syrah grapes include Atwater, Billsboro, Red Newt, and Hector Wine Company.

These are exciting times for Finger Lakes wine, with newcomers and old-timers coaxing better and better results from their vines. It is heartening that the region’s increasing success has been driven not so much by competition but by a spirit of cooperation. That spirit is nowhere more apparent than in the annual production of a wine called Tierce.

Tierce is the brainchild of three Finger Lakes winemakers: Dave Whiting of Red Newt Cellars, Peter Bell of Fox Run Vineyards, and Johannes Reinhardt of Kemmeter Wines (formerly of Anthony Road Wine Company). Each year since 2004, the three have combined forces to create a wine, usually a Riesling, that is blended from the production of their three operations. “I thought this would be a great idea, not only for the reason of making good wine, but also to serve as a metaphor for what goes on in the Finger Lakes, which is all about collaboration among winemakers,” Bell told Wine Review Online in 2012, adding, “We don’t consider each other competitors; we’re collaborators and co-conspirators.” The trio spends hours tasting and blending tank samples until they achieve a characterful, well-balanced wine worthy of the Tierce label. In 2013, their efforts were rewarded by the selection of the Tierce 2010 Riesling for service at the Inaugural Luncheon for President Barack Obama.

That success is indicative of a region where it is not uncommon for wineries to share expertise, equipment, and facilities. A significant role in this regard is played by Cornell Cooperative Extension, which shares a great deal of data and expertise as well as serving as a focal point for discussion and experimentation. In the end, one of the advantages of the Finger Lakes wine community is a feeling that success for one is a success for all. Tierce collaborator Reinhardt summed it up nicely in a 2009 interview with Wine Spectator: “In my career, I have yet to explore a region where people have been more humble, down to earth, and willing to work together.”

—Dave Pohl, MA ’79, is a wine buyer at Northside Wine & Spirits in Ithaca