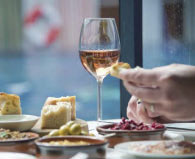 Barbecue at the Wineries
June 13

Eight wineries on Keuka Lake play host to this culinary event, with each concocting its own barbecue dish with a special sauce, marinade, or rub. corningfingerlakes.com/events/barbecue-wineries

The three-day event at Watkins Glen International raceway features tastings from more than eighty wineries, making it the largest single showing of wines produced in New York State. The festival boasts food and craft vendors, wine seminars, and culinary classes, in addition to demonstrations in such arts as painting and ice carving. flwinefest.com

Touted as the only festival of its kind east of the Rockies, the event features nightly jam sessions, performances by international stars, wine tastings, and numerous food and craft vendors. It’s a fixture of Syracuse Artsweek, which attracts more than 66,000 visitors to the city’s downtown. cnyjazz.org/nejwf

Held at Sunset View Creamery just outside Watkins Glen, this annual event offers the opportunity to sample the many wares of the Finger Lakes Cheese Trail. Other highlights include cooking lessons, a grilled cheese cook-off, and ricotta-making classes. flcheesetrail.com/Cheese_Festival.html

This four-day celebration of greyhound adoption is headquartered at Pompous Ass Winery, part of the Seneca Lake Wine Trail. Registrants can bring along their dogs, regardless of breed, as they visit the tasting rooms at more than twenty participating wineries. Proceeds benefit greyhound adoption groups throughout the Northeast. grapehounds.com

Fall-themed dishes are on the menu at Keuka Lake wineries that pair their creations with locally sourced cuisine. keukawinetrail.com/harvest

The Ithaca Commons is home to this popular homage to the apple, with numerous growers, bakers, cider-makers, and more on hand to sell their wares. This fall’s event is the thirty-third.downtownithaca.com