At the annual Vet college open house in April, visitors learned how to milk a cow, took ailing stuffed animals to the teddy bear ER, and petted future seeing-eye dogs. Down the hall from the reptile room, next door to a classroom where kids could listen to a dog’s heartbeat, was one of the more exotic and popular exhibits: live owls, falcons, and other birds being rehabilitated by the Cornell Raptor Program. Dozens of visitors looked on as a Eurasian eagle owl—the world’s largest owl species—perched on the arm of a student volunteer; across the room, another program member fielded a barrage of questions about the nervous (and loud) screech owl she was holding.

Established in 1993 under the aegis of the animal science department, the program works with injured birds of prey and promotes conservation of species and their habitats. Its facility, located on Game Farm Road, currently houses some forty-five birds, ranging from a tropical owl called Zorro to a golden eagle named Esther. (The latter was dubbed in honor of University foremost benefactor Esther Schiff Bondareff ’37; the raptor facility is named for Bondareff and her late husband, Daniel Bondareff ’35.) “They are birds that have to be in captivity for one reason or another, usually because of some debilitating injury,” says program director John Parks, an animal science professor. “But they are also tame enough and calm enough that they can be handled.”

The Raptor Program traces its roots to the Seventies, when ornithologist Tom Cade (now a professor emeritus) began a restoration effort for the American peregrine falcon. That operation moved out West in the mid-Eighties, but students and faculty kept up efforts to rescue and rehabilitate birds of prey. The program’s original home, in the Sapsucker Woods Hawk Barn, was razed in 2001 for the Lab of Ornithology expansion; the current facility, dedicated in fall 2005, has 4,000 square feet of space and more than a dozen fiberglass aviaries. A two-story barn houses the majority of the birds in separate enclosures, providing space to fly and recover from injuries. A smaller adjacent barn has facilities for the captive breeding of such species as the northern goshawk. 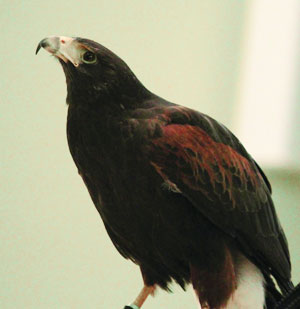 Each Saturday morning, students weigh the birds, clean their aviaries, and bring them outside for fresh air and exercise; if needed, they even bathe the animals with soap and antibacterial wipes to prevent infection. Student supervisor Erin McCourt ’12, a double major in animal science and entomology, says she’s particularly fond of Ed, a turkey vulture who was found with an injured wing and two broken legs that did not heal properly. As a result, he has trouble soaring for long periods of time, making him unable to hunt well. “When they found him, he was in such bad shape,” she says. “It took a lot of work to get him back.”

The program holds regular education sessions—including behavioral demonstrations and lectures on raptor history and biology—for elementary schools, scouting groups, senior centers, and other organizations. Education director Sarah Cudney ’12, a double major in animal science and biology, notes that the program attracts a particular subset of students—those who are wildly passionate about their charges. “We realize,” she says, “that you have to be insane to get up at nine a.m. every Saturday and clean birds.”