At Aria Resort & Casino, the centerpiece of a sixty-seven-acre urban complex that has altered the skyline of Las Vegas Boulevard, vice president of hotel operations Paul Berry ’89 sits in his spacious office and reflects on his big gamble. When he arrived in this swath of neon in Nevada, fresh out of the Hotel school, most of his peers were opting for positions in traditional hospitality management. “I chose the gaming resorts side of it,” says Berry, a Balti­more native who had never been west of the Mississippi. “I thought it was worth taking a chance.”

At the time, Vegas still resembled its original incarnation—an adult playground of $1.99 buffets and cheap rooms, where hotels made most of their money from casino gambling. But Berry arrived on the cusp of a sea change in the desert. He was recruited by what was then known as Golden Nugget Companies for its management associate program, his training focusing on the opening of a 3,044-room hotel. The Mirage, then the most expensive hotel-casino in history, ushered in the era of the mega-resort on the Las Vegas Strip. In 1994, when the company (now known as MGM Resorts International) opened the pirate-themed Treasure Island, Berry oversaw reservations, the front desk, and valet.

Five years later, he was director of guest services (and eventually VP of hotel operations) at the brand-new Bellagio. The 3,950-room resort, says Berry, “took luxury in Las Vegas to a whole new level,” proving that a hotel-casino could be a AAA Five Diamond resort in which more revenue comes from non-gaming ventures like high-end retail, elegant rooms, and fine dining. “Las Vegas always reinvents itself and continues to push us as operators,” says Berry, who lives with his wife, Christina DePiero Berry ’90, and their two daughters thirteen miles west of the Strip.

But while MGM Resorts has been the major player in the reinvention of the Strip, it has also experienced a remarkable run of bad luck. Among the mishaps and tragedies: the onstage tiger attack at the Mirage in 2003 that nearly killed Vegas icon Roy Horn, the Easter 2004 power failure that shut down the Bellagio for four days, the fire that charred the upper floors of the Monte Carlo in 2008, and the gunman who escaped with $1.5 million in chips from the Bellagio on Christmas Eve 2010. Calling it a “star-crossed corporation,” one Las Vegas Weekly columnist wondered, “What else could possibly happen?”

How about pumping an unprecedented amount of money into an endeavor based on high volume and luxury, only to run smack into a recession? Nearly a decade ago Berry and his colleagues began developing a behemoth called CityCenter—an 18 million-square-foot campus with high-end retail and dining, a pair of condo towers, and three hotels: the Mandarin Oriental Las Vegas, the Vdara Hotel & Spa, and the 4,004-room Aria. Construction began when the economy was booming, but by the time Aria opened in December 2009 the project’s price tag had more than doubled to $8.5 billion. As the credit market collapsed, it had to be rescued by Infinity World Development, a subsidiary of Dubai World, which invested some $2.7 billion to become a joint partner. The New York Times described the whole venture as a “symbol of prerecession hubris.”

The run of misfortune continued. Six workers died in five separate construction accidents. Poolside sunbathers reported being burned by the rays reflecting off one of CityCenter’s towers. And after six Aria patrons came down with Legionnaires’ disease, Berry wrote to every guest who stayed there over a two-week period in July 2011, informing them they may have been exposed to the potentially fatal infectious disease. “Opening a hotel,” Berry notes, “is not for the faint of heart.” But there have also been some accolades. Both Aria and its Sky Suites—a hotel within a hotel, with a separate lobby and three-story “sky villas” that cost up to $7,500 per night—are among the handful of Vegas properties to have received AAA Five Diamond certification. And Aria is the largest hotel in the world to receive the U.S. Green Building Council’s LEED (Leadership in Energy and Environmental Design) gold award. 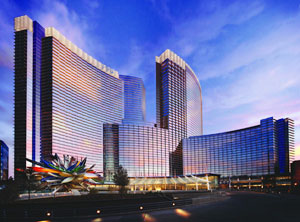 Aiming for a unique take on modern luxury, CityCenter’s developers hired architects and designers who had never worked in Las Vegas. Aria’s exterior consists of two curvilinear glass towers that resemble futuristic office buildings; its interior features natural light and earth tones. Berry was involved in countless decisions. How many cubic feet of water should Aria’s swimming pools (including one reserved for adults) contain? How many salon stations should the spa have? Which chefs should helm its more than a dozen restaurants?

Although Aria’s Viva Elvis Cirque de Soleil show is a nod to old-school Vegas, one element that defines the major hotel-casinos on the Strip—a catchy theme—is noticeably missing. There is no Luxor pyramid or Excalibur castle, but Aria has a de facto theme: sustainability. In-room touch-screen technology is aimed to reduce energy consumption (leading Popular Mechanics to describe Aria as perhaps “the most technologically advanced hotel ever built”). Aria’s limousine fleet runs on compressed natural gas; the Maya Lin-designed sculpture of the Colorado River that hangs in the lobby is made of reclaimed silver from photo processing plants.

Whether the diamond ratings and the sustainability focus will translate to financial success in a difficult economy remains to be seen. But Berry is betting on it.