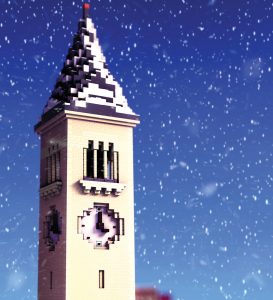 Welcome to CornellCraft, a virtual world created in the videogame Minecraft. Designed by a cadre of enterprising students and recent alumni, this ersatz East Hill is a massive work in progress—and it’s more than just a pastime. Since the COVID-19 pandemic disrupted campus life in the middle of the spring 2020 semester—first sending students home, then prescribing a radically changed environment for living and learning in 2020–21—the University’s virtual incarnation has offered comfort and entertainment to many in the Big Red community. “It feels like Cornell culture is alive and well, and it’s real,” Brandon Axelrod ’21, a biology and society major in CALS, says of the Minecraft world he helped create. “It’s awesome to see how much love people have for the campus and that we’re really making an effort to make the best of the situation, despite not really knowing when it’s going to end.” 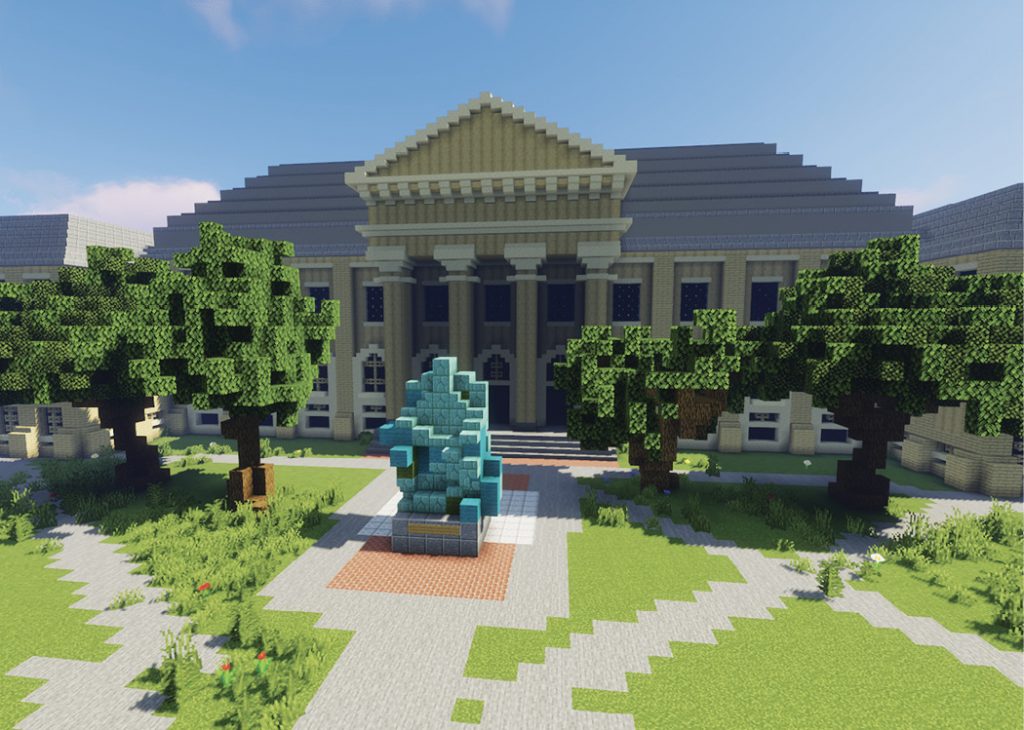 The Arts Quad (including Goldwin Smith and a blocky interpretation of the A.D. White statue)Provided

Since its inception, CornellCraft has drawn more than 1,500 users, many of whom are current undergrads. In mid-December—to the immense pride of Axelrod and his fellow builders—it got a shout-out from a Cornellian who’s a legend in the videogame world: Reggie Fils-Aimé ’83, the retired president and COO of Nintendo America. “Students and alumni of @Cornell know the campus is a beautiful and magical place,” he tweeted to his more than 585,000 followers. “With visitor restrictions in place, Cornellians built a virtual campus through @Minecraft and you should absolutely visit. 1:1 scale and stunning detail. Perfect!” 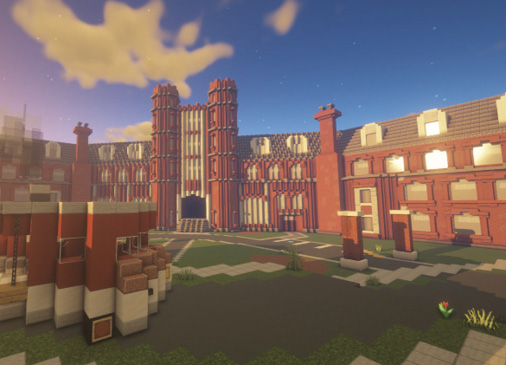 For readers who are of a certain age (or who don’t have ready access to a tween): Minecraft is a decade-old videogame that can be played on a computer, mobile device, or gaming console such as Xbox, Playstation, and Nintendo Switch. In it, users—playing either solo or with others online—can build worlds, inhabit them, and have adventures; since all construction is based on blocks, the worlds have a Lego-like aesthetic. 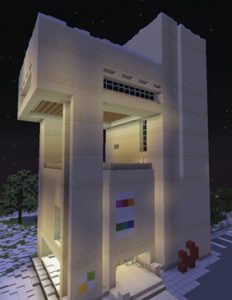 A fan of the game from childhood, Axelrod launched a Cornell Minecraft world along with his housemates shortly after the University suspended in-person instruction in March; when he learned that a classmate—Jesse Potts ’21, a computer science› major in Engineering whom he’d never met—had done the same, the two connected and merged their projects, putting out a call for others to join in. The undertaking was eventually dubbed CornellCraft (findable at cornellcraft.com) and grew to include some three dozen authorized builders, chosen through an application process. The hundreds of users who’ve logged in to the world they’ve created can wander the campus, play games like chess and Tetris, chat with one another, or just hang out on their favorite quad. “When we were all sent home for the quarantine it was really weird; everyone was kind of lonely,” recalls computer science major Faizaan Datoo ’23, the project’s lead developer. “Just being able to congregate with friends again and do something meaningful was very rewarding—to be able to stay connected to school when you were home.” 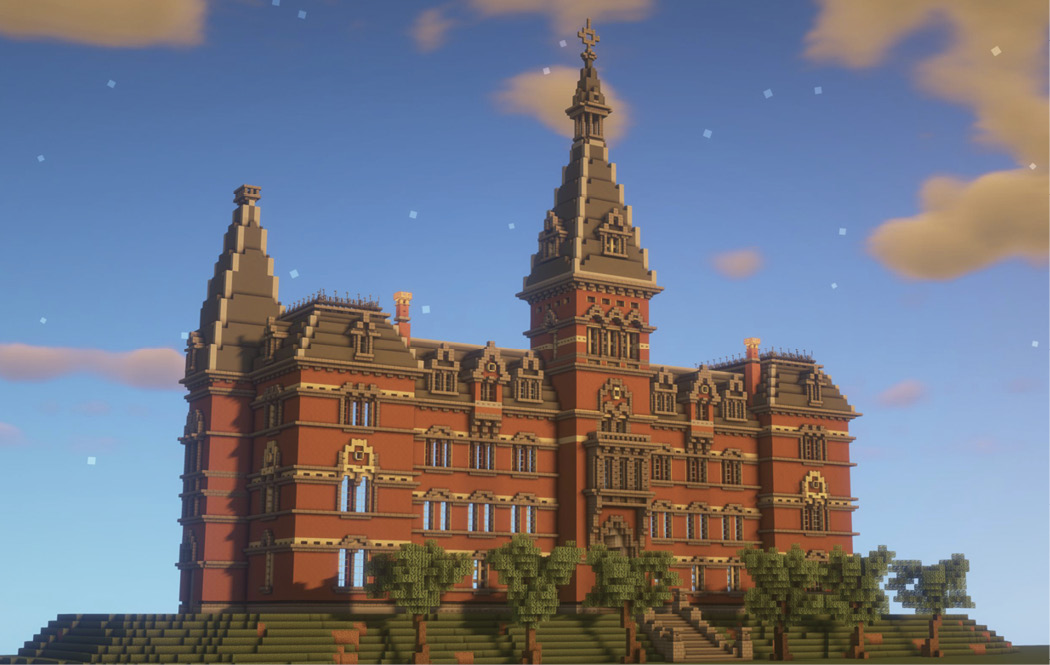 Open to anyone with a Minecraft account (which carries a one-time fee of about $27), CornellCraft has not only offered solace to current students unsettled by COVID, but has given a taste of East Hill to applicants who’ve lost access to traditional in-person tours, as well as to alumni nostalgic for a beloved place that’s currently off-limits to visitors. “Of course anyone can watch a video overview of campus on YouTube or look at pictures online, but we wanted a whole immersive experience, and Minecraft allows you to do that,” Axelrod notes. “We didn’t expect this to become as large as it did. The support from the Cornell community has been overwhelming.”

The Minecraft version of Central Campus has largely been completed, with at least the skeletons of buildings beyond sketched in every direction, including those in the Vet college, North and West campuses, and Collegetown. Eventually, the designers plan to add the interiors of major student hubs like the Straight, the Cornell Store, and Robert Purcell Community Center—and they may expand to encompass parts of Ithaca, such as the Commons. As Potts notes with a laugh, building activity tends to wax and wane along with the students’ academic workloads—but, he says, “it always peaks during prime procrastination hours.” 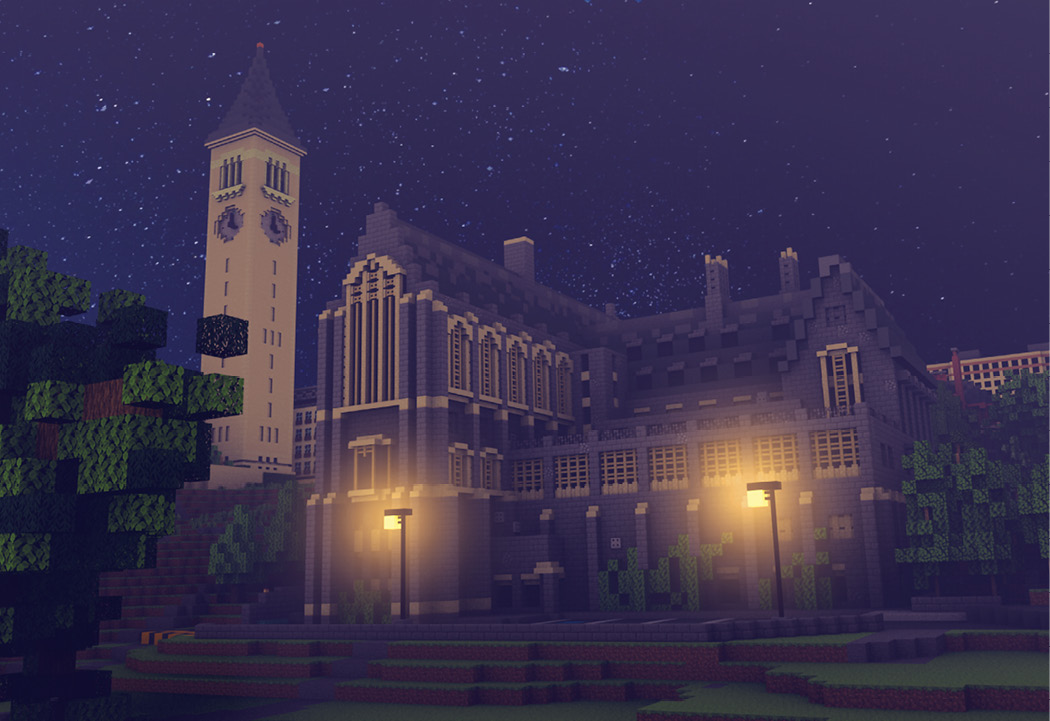 Aiming for maximum accuracy, the builders tap a variety of resources, including New York State topographic maps and Google Street View images; chimesmasters gave permission for CornellCraft to include songs from McGraw Tower, and a recording of an admissions tour informed an interactive version that Datoo coded, in which users can pause to learn more about the facilities as they pass by. Builders even obtained a University-generated map that pinpoints the locations of individual trees. “It’s easy enough to find pictures of buildings on Google Images, but our builders are very meticulous, and we’re looking to make this as realistic as possible—including the spacing between one tree and the next,” says Axelrod. “We have people who go around and place a sapling right where it actually is in relation to the buildings around it.”

Last fall the Orientation Steering Committee (on which Axelrod serves) brainstormed novel ways to introduce new students to the Hill in the COVID era; solutions included leveraging CornellCraft for activities like building competitions. There’s even talk of using it to host large events that are currently prohibited in real life—such as Slope Day, which was canceled for 2020 and is unlikely to be held this spring. And the builders hope that interest in the Minecraft campus will endure beyond the pandemic, offering a way for far-flung Cornellians to stay connected to East Hill and to each other. 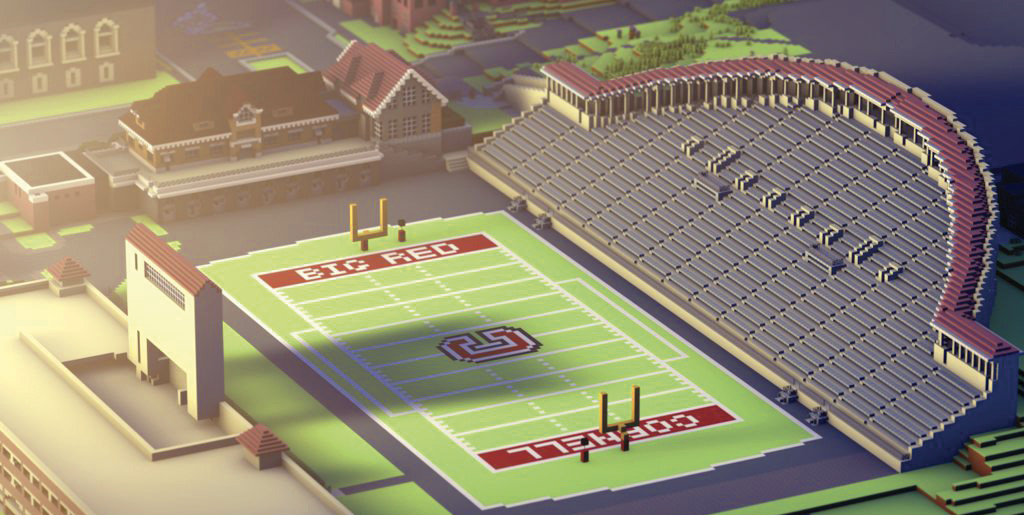