It’s the morning after Super Tuesday in early March, and Marc Lacey ’87 is leading his usual 10:30 a.m. meeting to discuss the day’s stories with other editors and staffers at the New York Times. It’s been a hectic twenty-four hours: Lacey, the paper’s national editor, had been at the office until 3 a.m. the night before helping coordinate coverage of the Democratic presidential primaries, the same day a deadly tornado ripped through Tennessee. Meanwhile, the coronavirus crisis is worsening, with the number of cases around the world continuing to climb. 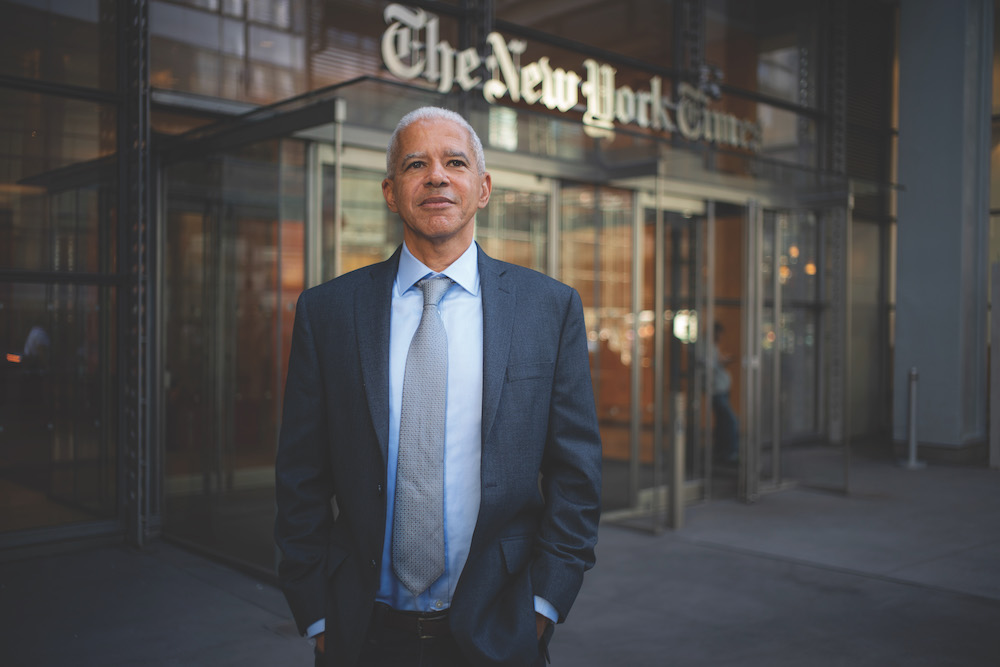 Lacey’s colleagues—two of whom are calling in to the newspaper’s headquarters from the Chicago and Boston bureaus—chime in with the latest virus updates. There’s an outbreak in California, and thousands aboard a cruise ship are stranded in the waters near San Francisco awaiting test results. In New Hampshire a patient suspected of having the virus was told by doctors to stay home, but he ignored that advice and went to a mixer at Dartmouth. Reporters are assigned to follow up on each piece of news, and there’s a discussion about what information should be folded into broader coverage or written up as breakout articles. The New Hampshire item catches Lacey’s interest. “That’s unbelievable,” he says. “Someone’s supposed to be quarantined and they show up at a public event?”

Lacey has had little sleep—he took a break to go home briefly to suburban New Jersey—but doesn’t seem a bit tired. After twenty-one years at the Times, he says he still gets excited to come to work. “It’s never dull around here,” he says. “That’s what I love about the job. Big stories are always breaking and you can never imagine what the next one is going to be.” He was appointed to his position in 2016 after stints as the editor of the weekend news report, a deputy foreign editor, and a foreign correspondent who covered conflicts and natural disasters in dozens of countries. Now he’s in charge of forty reporters in twelve cities across the country who cover breaking news as well as topics like immigration and criminal justice. He recently pushed to create three new beats—the suburbs, rural affairs, and religion—for reporters who will be based far from New York City.

In October, Lacey was pulled into the spotlight when he was tapped to moderate his first presidential debate, alongside CNN’s Anderson Cooper and Erin Burnett. The event featured a record number of candidates: at the time, twelve Democrats were vying for the nomination. “It was a huge juggling act to keep it moving and not let it descend into a shouting match,” he says. Lacey stood out for pressing Senator Elizabeth Warren on how she’d finance Medicare for All. She was criticized for being evasive, and a few days later released a comprehensive healthcare plan. “I think there was a sense that she was going to be asked this again and again, so she was going to have to come up with an answer,” says Lacey. “It felt good to actually affect the campaign in that way.”

Born in Flushing, Queens, Lacey spent five years of his childhood on the island of Jamaica, where his father had a teaching job. His family then moved outside Buffalo, and he graduated from Arts & Sciences with a degree in biology and society. He found a passion for journalism on campus, serving as editor-in-chief of the Daily Sun. “I’d cover any scandal that broke out, any crime,” he says. “I loved getting to the bottom of things.” After two years at the Buffalo News he spent a decade at the L.A. Times, participating in Pulitzer Prize-winning coverage of the city’s 1992 riots and 1994 Northridge earthquake. “For the O.J. Simpson case, I was outside his Brentwood mansion when he pulled up in the white Bronco,” he recalls. “I felt like I was living through history.”

Lacey next went to the nation’s capital to cover Congress and President Clinton’s impeachment before being recruited by the Times as a D.C. correspondent. In 2001 he began to hop the globe as a bureau chief in Nairobi, Kenya, then Mexico City. Lacey was among the first to report in person on the mass killing in Darfur, and oversaw coverage of the 2010 Haitian earthquake. “They were these big, big stories where you thought historians might one day read your version of what happened,” he says. “It felt like what we were doing was really important.” He returned to the U.S. as the paper’s first-ever Phoenix bureau chief, and made his mark helping to direct reporting when U.S. Rep. Gabrielle Giffords, MRP ’97, and eighteen others were shot in Tucson in 2011.

Earlier this year, Lacey returned to the Hill to spend two weeks talking to students and faculty as the University’s first distinguished visiting journalist. Despite the struggles facing newspapers these days, he has encouraging words for those who aspire to break into the field. “The industry is changing rapidly, but there’s always going to be the need for journalists in America and the world,” he says. Still, with many smaller papers closing or cutting staff, Lacey adds that the decline of local coverage is a concern. To that end, he has spearheaded an effort at the Times to partner with other media organizations; a recent investigation of squalid conditions at a migrant detention center—produced jointly with the El Paso Times—made headlines. Lacey says such efforts pool important resources and knowledge. “Both organizations believed this story was better than what each could do on their own,” he says. “I want to do more of that. We lose nothing by collaborating, and everyone gains from it.”

Lacey admits that his job has become more challenging since the election of President Trump, who makes the unpredictable nature of the news business even more so. “Making news by tweet is something we’ve never had to experience before,” he says. It can also be difficult when the Times is openly rebuked by the President, who has frequently described the nation’s news media as “the enemy of the people.” “We’ve been dragged into the midst of a political debate in the country, which makes us uncomfortable,” Lacey observes. “We can handle the criticism—but we don’t think it’s healthy for journalism, or for democracy, for journalists to be vilified.”