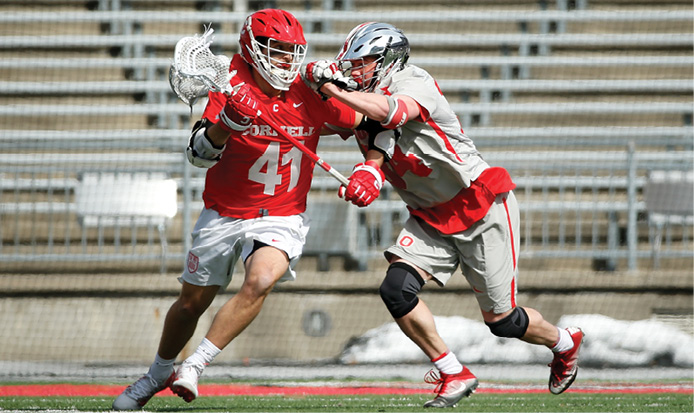 MEN’S LACROSSE A shortened five-game season ended with five wins and Cornell sitting second in the national rankings. The Big Red averaged 18.4 goals per game (second in the nation) and closed the season with a dramatic 18-17 win over then-second-ranked Penn State on a goal from Angelo Petrakis ’23 with eight seconds to play. Jeff Teat ’20 led the team with 27 points on 12 goals and 15 assists while John Piatelli ’21 (above) had a team-high 20 goals.

WOMEN’S & MEN’S SQUASH Siva Subramaniam ’22 earned first-team All-American honors after reaching the semifinals of the top flight of the women’s College Squash Association Individual National Championships in March. She won her first two matches at nationals before losing her third. Veer Chotrani ’23 finished 10th at the men’s College Squash Association Individual National Championships to earn first-team All-American honors. After losing his opening match, Chotrani rallied to reach the final of the consolation bracket, where he lost to the tournament’s top seed.

MEN’S TENNIS The Big Red won its first ECAC indoor championship in seven years, upsetting top-seeded Harvard and second-seeded Dartmouth en route to the title. Eero Vasa ’21, Alafia Ayeni ’21, Lev Kazakov ’20, and Pietro Rimondini ’20 provided the winning margin with victories in their singles matches while Vasa and Ayeni also picked up a win at first doubles. The ECAC title vaulted Cornell to the 16th spot in the Oracle/Intercollegiate Tennis Association rankings, the second highest in team history. The outdoor season was canceled due to the COVID-19 outbreak.

WRESTLING Chas Tucker ’20 and Ben Darmstadt ’21 won individual titles at the Eastern Intercollegiate Wrestling Association (EIWA) championships to help the Big Red to a second-place finish in what proved to be its final event of the season. Tucker won the title bout at 133 pounds 3-1 in sudden victory to finish his season with a perfect 31-0 record and earn his second EIWA title. Darmstadt notched a pair of takedowns in the 197-pound title match en route to an 11-0 victory and his second EIWA title.

BASEBALL Pitcher Spencer Edwards ’23 excelled in his collegiate debut during a shortened season, striking out seven while allowing just one run and two hits in five innings; the game, against 16th-ranked Duke, ended in a 2-0 loss. The next day, John Natoli ’20—making his first start after earning All-Ivy honors as a reliever last season—threw five shutout innings against Duke before the Blue Devils rallied for a 3-1 win. 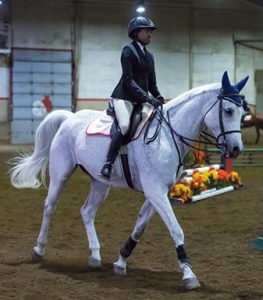 FENCING Three CU fencers earned spots in the NCAA championships that were later canceled. Madeleine Nishimura ’23 finished fifth in the foil at the NCAA Northeast Regional, including an 11-1 record in her first two rounds. Megan Eno ’22 qualified for the second time in the épée after going 11-12 at the regionals with 95 touches scored and 95 received. Ying Cao ’23 qualified in the foil after finishing 13th at the regionals with an 8-4 record.

MEN’S SWIMMING Paige daCosta ’23 won one indi­vidual title and was runner-up in two other events at the Ivy championships as the Big Red finished sixth. He won the 100-yard backstroke with a school-record time of 46.52 and set another school record while finishing second in the 200-yard individual medley in 1:44.50. He also finished second in the 200-yard backstroke.

GYMNASTICS Claire Haklik ’21 successfully defended her floor exercise title at the Ivy Classic, posting a score of 9.925 to finish tied for first. The Big Red finished first as a team in the floor exercise with Samantha Henry ’20 taking third and Izzy Herczeg ’21 finishing fourth.

MEN’S SOCCER Three months after the end of his college career, John Scearce ’20 signed a professional contract with Union Omaha, a first-year team in the US League One, which is the third tier of American soccer. A first-team All-Ivy pick after leading the Big Red with five goals in 2019, Scearce played in multiple preseason games for Omaha starting in early March before the league delayed the start of its regular season.

MEN’S HOCKEY Anthony Angello ’19 made his NHL debut on January 31, playing four minutes for the Pittsburgh Penguins in a 4-3 overtime win against the Philadelphia Flyers. He later scored his first NHL goal in a 5-2 win over the Toronto Maple Leafs as he replaced all-star Evgeni Malkin, who was ill. Angello, who scored 36 goals in three seasons on East Hill, has also played for the Wilkes-Barre/Scranton Penguins of the American Hockey League.