We have just returned from the second annual Cornell Alumni Leadership Conference (CALC), a truly motivating, uplifting, and fun meeting of some 800 alumni held this year in Washington, D.C. David spent a few days in our nation's capital before CALC, meeting, among others, recently elected members of Congress who are Cornell alumni. When Robin arrived, we were introduced to class officers, Cornell Alumni Admissions Ambassador Network (CAAAN) volunteers, and others who are making Cornell and our world a better place. It was a joyful and energizing experience.

What was once a training event designed for alumni class officers has evolved into a much more inclusive gathering, with volunteers from the broad sweep of organizations that contribute so much to Cornell. There were introductory sections—the "100-level courses"—on the basics of volunteer leadership, and a more advanced session—a "200-level course"— on strategies for alumni organizations (with no integrals or derivatives in sight!). Some activities were all-alumni events, offering Cornell-specific information or featuring faculty and alumni who shared expertise that participants could use in their volunteer activities and other facets of their lives. Other sessions were organized specifically for people who volunteer with admissions, reunions, classes, clubs, affinity groups, the Cornell Hotel Society, Greek life, and PCCW. We found CALC to be a terrific opportunity for alumni, faculty, and senior leadership to join forces in better understanding and advancing Cornell. Vice presidents Susan Murphy '73, PhD '94, Tommy Bruce, Charlie Phlegar, and Mary Opperman were among those who participated in panels, usually with alumni, staff, or faculty. The attendees seemed to appreciate this mixing of perspectives and ideas. 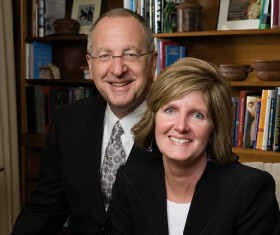 During the Saturday luncheon, Ithacan Jane Little Hardy '53 received the 2011 William "Bill" Vanneman '31 Outstanding Class Leader Award. Her acceptance speech was spellbinding. Although Bill could not attend, his great Cornell spirit was felt.

In all, the CALC participants represented all seven undergraduate colleges and spanned class years from 1946 to 2014. They came from thirty-three states, the District of Columbia, and Puerto Rico. Cynthia Kubas, Class of '78, traveled the longest distance, coming to Washington from Hawaii. Nearly all of Cornell's colleges and units participated, and sixty-three current students were in attendance, along with twenty-five faculty members and alumni who served as presenters.

In addition, we had a large virtual audience for Saturday's luncheon, as alumni around the country logged on to the Cornell Alumni Association's Facebook page. Live-streaming to Facebook was a timely innovation, since many of the participants had just heard a presentation on "What's Next with Social Media," featuring Adam Hirsch '04, chief operating officer of mashable.com; Laura Fitton '94, author of Twitter for Dummies; and Lee Humphreys '99, an assistant professor of communication at Cornell.

Nine University trustees attended, including five members of the Trustee Task Force on Volunteer Leadership, which had met the day before CALC with a group of volunteer leaders to solicit ideas on how to create more rewarding "career paths" for Cornell volunteers, active succession plans for organizations, and meaningful organizations for Cornell. The task force, in this first year of its operation, will also be collecting data from academic deans and Cornell staff who work with volunteers to complete an operational plan for volunteer leadership no later than 2013. We believe this task force is a good and important idea.

For both of us, though—as we suspect was true for many other participants—the best thing about CALC (in addition to no calculus problem sets) was meeting and networking with other Cornellians from so many classes, colleges, and alumni organizations. We left with even greater confidence in the power of our individual and collective efforts to strengthen our University. Now the job at hand is to harness all that energy, commitment, and talent for not only continuing Cornell on its path toward greater excellence in education, discovery, creativity, and service, but to solve some of the problems of our country and world—a job for which Cornellians are uniquely suited.

As always, your take on CALC and other alumni initiatives is what counts. Please share your observations about the conference and Cornell in general. Onward!

— David Skorton (david.skorton@cornell.edu) and Robin Davisson (robin.davisson@cornell.edu) are Cornell's first couple. Davisson holds a dual faculty appointment as professor of cell and developmental biology at Weill Cornell Medical College and professor of molecular physiology at the College of Veterinary Medicine.