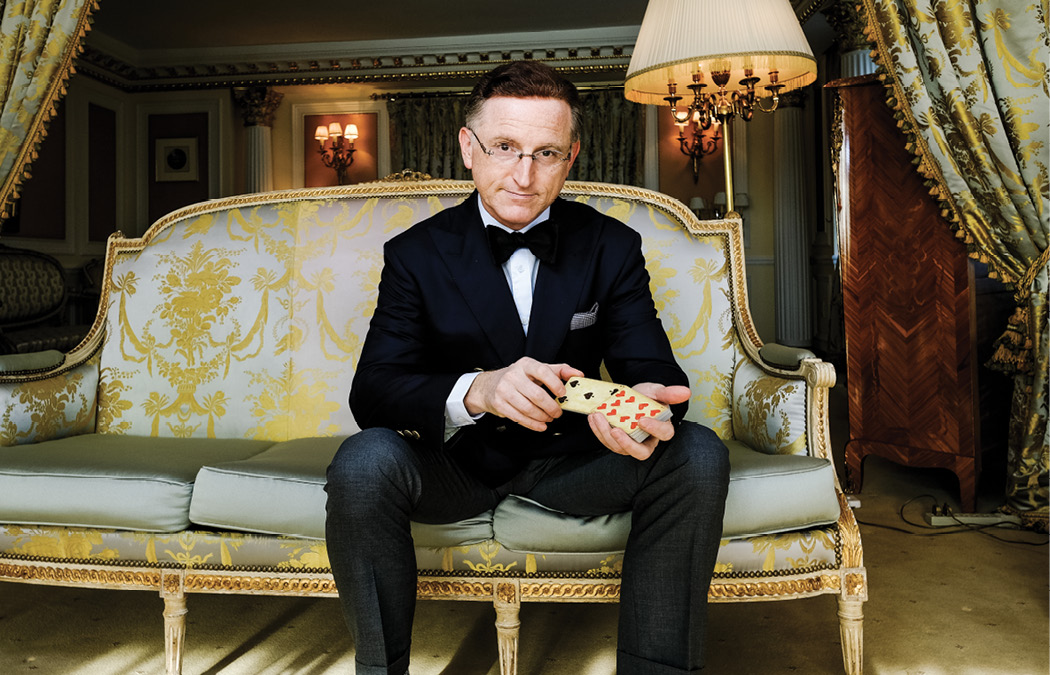 Steve Cohen ’93 amazes audiences with card tricks and much more.Provided>

Magician Steve Cohen ’93 doesn’t saw ladies in half like Penn and Teller. He doesn’t catch bullets in his teeth like David Blaine, or make tigers disappear like Siegfried and Roy. Over the past two decades, Cohen has built a thriving career as a professional magician by creating a sophisticated act with Old World charm—astounding an upmarket clientele with sleight of hand, close-up illusions, and telepathic wizardry.

Take a routine performed at one of his Chamber Magic shows that CAM attended in April at the ritzy Lotte New York Palace hotel in Midtown Manhattan. It started with Cohen asking to borrow a wristwatch. An audience member named Kevin offered his, and Cohen noted that it displayed 7:38 p.m. He then told Kevin to think of a number. Without touching the watch—which Kevin held in a closed fist—Cohen gave a long stare and waggled his fingers with a showman’s flair. “I’m attempting to move the watch back in time,” he said, “the number of minutes that you’re thinking of.” After a moment, Cohen asked Kevin to open his hand. The watch was indeed set to 6:26 p.m., a difference of seventy-two minutes—the very number Kevin had envisioned. The crowd burst into wild applause. “Incredible,” marveled Kevin. “Just incredible.”

Cohen has been amazing audiences at the Palace five times each weekend since March 2017; prior to that, he had a regular gig at the Waldorf Astoria for seventeen years, until it closed for renovations. He estimates that more than a half-million people have seen him perform over the years, including a who’s who of one percenters—Martha Stewart, Warren Buffett, Michael Bloomberg, and the Queen of Morocco, to name just a few—earning him the moniker the “Millionaires’ Magician.” Tickets range from $125 to $250; according to Forbes, the shows have grossed upwards of $20 million. Cohen is considered such a New York City institution that to honor his 5,000th performance in 2017, Mayor Bill de Blasio proclaimed it “Chamber Magic Day.” And Cohen has done it all through word of mouth. As he notes: “I have a zero-dollar advertising budget.”

The secret to his success? High-class hocus-pocus, with New York magazine describing Chamber Magic as an “elite attraction” that’s “likely to leave you feeling that the black arts could be high art as well.” It’s an intimate show—only eighty seats—and the dress code calls for cocktail attire. (Cohen himself is elegantly clad in white tie and tails.) He fashioned the show after the magic acts that entertained in European salons during the 1800s, and its venues reflect that. At the Palace, Cohen holds court in a nineteenth-century drawing room that features marble columns, luxe paintings, and crystal chandeliers; his long-standing engagement at the Waldorf began in the Duke and Duchess of Windsor’s suite.

Of course, his wizardry is top-notch, too. At the April show that CAM attended, Cohen linked three wedding rings (on loan from spectators) by swirling them in an empty wine glass in full view of everyone, and persuaded a “ghost” to make individual playing cards levitate. In a mind-reading segment—where participants were selected by others in the audience to ensure there were no plants—he somehow guessed that one young man’s childhood nickname was “Cryin’ Brian,” that one woman had two tattoos (though none were visible), and that another woman had once hitchhiked through Germany. In one of his signature tricks—“Think a Drink,” which he didn’t perform that night—Cohen asks people to write down their favorite beverages and magically pours each request from a silver teapot. It can be anything, and many viewers have tried (and failed) to stump him, with requests ranging from margaritas to chocolate milk to Pepto-Bismol. Says Cohen: “It’s really thrilling to see people in the audience—even titans of industry or billionaires—suddenly forget all their pretenses and become children again.”

Raised in Chappaqua, New York, Cohen was introduced to magic by his great-uncle, an amateur performer who did tricks at family get-togethers. By ten, he’d landed his first paid booking at a neighborhood birthday party. As a teen, he attended a summer camp for young magicians, where fellow campers included Blaine and actor Adrien Brody. “For me, magic just stuck,” says Cohen. “I never let go of it—much to the chagrin of my parents, who wanted a doctor or a lawyer in the family. My joke is, instead of becoming a physician, I became a magician.”

A psychology major on the Hill, Cohen continued to hone his craft during college. He entertained at events for University donors; famed astronomer Carl Sagan once hired him to perform for visiting astrophysicists. He also self-produced a series of shows—an early version of Chamber Magic—at Cornell’s Black Box Theatre. After graduation, he and his now-wife of twenty-five years, Yumi Morishige, MA ’94, moved to Japan, where he worked as a translator and did magic on the side. A break came when David Udell ’82, then general manager of the Park Hyatt Tokyo, hired Cohen to amuse VIP guests like the Rolling Stones. A year later, he moved back to New York and got a job in marketing, but continued to moonlight. He launched a regular show at a friend’s apartment, eventually moving it to the National Arts Club and later to the Waldorf. Then, in 2008, “CBS Sunday Morning” did a piece on Chamber Magic. “It was a watershed moment,” he says. “That eight-minute segment sold over $1 million worth of tickets in less than a week.” It also led to appearances on CNN and “Late Night with David Letterman,” as well as coverage in publications like the New York Times. Since then, he has starred in a History Channel special, had a solo show at Carnegie Hall, and published books that include a semi-autobiographical graphic novel, The Millionaires’ Magician. (Pal David Copperfield wrote the foreword.)

Currently, Cohen is preparing for a twentieth anniversary show, to debut in March 2020. He’s aiming to add at least one major trick; since his audiences have high expectations, he admits, he feels a fair amount of pressure to impress. One recently adopted strategy to keep his energy up: running marathons. “The training has given me more endurance that has spilled over into my magic performances,” he says. “Now at the end of the night where I used to be exhausted, I’m ready to do another show.”