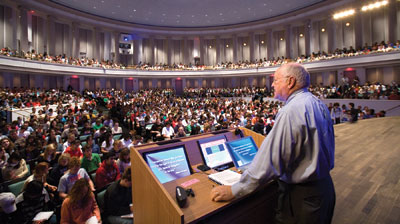 A few years ago, Marc Weissman '88 toured campus with his faithful bichon, Ezra. But when he went down the metal stairs to the Suspension Bridge, Ezra wouldn't follow. He couldn't imagine why. "Then it came back to me—this is the ‘visual cliff' effect," Weissman recalls. "He could see through the steps, and he thought he was going to fall."

Weissman, like some 65,000 other Cornellians, had learned about the phenomenon in Psych 101. In late December, after hearing that Professor James Maas, PhD '66, had retired after forty-eight years, Weissman wrote him to share the anecdote— one of hundreds of e-mails Maas has received since his departure was announced. "I took courses that were much smaller but not as engaging," Weissman notes. "He was like a performer, but he was teaching you higher-order concepts."

For nearly half a century, Maas's Psych 101 course filled Bailey Hall on Monday, Wednesday, and Friday mornings during fall semester. (In all that time he canceled exactly one class, citing laryngitis.) At its height in the Eighties and Nineties—before a renovation removed 700 seats—Maas filled the concert hall to its capacity of 1,948 and still turned people away. It was believed to be the largest live lecture course in the world; running it was a major undertaking, from having prelims copied at the print shop to overseeing forty TAs to fielding some 100 student e-mails per night. "It was a Cornell institution," says Megan Wherry Menner '96, MILR '03, who took the course as a freshman and later served as head TA. "You think you're just one of 2,000, but he took a keen personal interest in his students."

Maas arrived on the Hill as a grad student in 1960; four years later, when he was serving as head TA of Psych 101 and working on his dissertation, the professor teaching the course left for Penn. "The department chair said, ‘We don't have time to hire a real professor,'" Maas recalls with a laugh. "‘Would you consider teaching the course for a year?'" Maas sweated all summer. "I thought, How am I going to talk about psychology for forty-five hours? If I said everything I know, maybe it was three hours' worth." The answer lay in multimedia: Maas employed slides, photos, and film—even episodes of "Candid Camera"—when other faculty were using a few overheads or just the blackboard. "The word got around," he says, "and very quickly my class began to grow."

While students on other campuses were learning about operant conditioning from textbooks, Maas's students were watching volunteers suck lemons on the Bailey stage. Discussing the mental illness that may have plagued Vincent Van Gogh, he'd not only show his paintings but play Don McLean's folk song "Starry, Starry Night." "Jim's passion for teaching is unparalleled," says PhD candidate Rebecca Robbins '09, a former head TA who spent a postgrad year leading the section at Weill Cornell Medical College in Qatar, whose premed students take the course via distance learning. "When he gets up in front of the class, he comes alive."

At seventy-three, Maas isn't just retiring—he's moving on. He and his artist wife, Nancy, are decamping to Florida or Arizona in search of warmer climates and easier airport access for his frequent travels as a sleep consultant. Who will take over Psych 101? On a January day just hours before heading south, Maas sits in his emptying office and smiles a not-my-problem smile. "There are a number of people in the department who'd love to get their hands on the course," he says with a widening grin, "maybe not fully knowing what it entails."