The Cause by Eric Alterman '82 and Kevin Mattson (Viking) 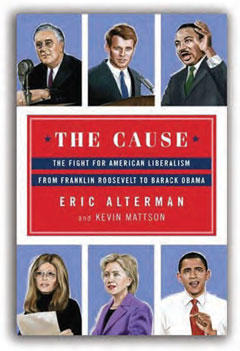 The Cause by Eric Alterman '82 and Kevin Mattson (Viking)

Alterman, a columnist for the Nation and professor of English and journalism at Brooklyn College and CUNY, traces the development of modern American liberalism from Franklin D. Roosevelt to Barack Obama. "America has undoubtedly become a fairer, more open, and less oppressive society thanks largely to the political and cultural struggles waged by liberals," he argues. But lately liberalism is embattled and needs to regain its sense of vision. "If liberal fortunes are ever to revive," Alterman writes, "liberals must find a way to recapture a simultaneously militant and optimistic spirit."

Suburgatory by Linda Erin Keenan '91 (Globe Pequot). Keenan's satirical look at suburbia is the basis for the ABC show of the same name. "While the TV series focuses on a transplanted teen from New York City," explains the former CNN writer for anchors Anderson Cooper and Lou Dobbs, "my book offers a vision of suburbia and contemporary American life that I witnessed when I myself was transplanted from the city after having my son." She skewers upper-middle-class pieties and the "all-around bad behavior that I have seen raging underneath the surface of those obsessively tended suburban lawns and bikini lines."

Life Sentences by William H. Gass, PhD '54 (Knopf). In his latest collection of essays, the former professor of philosophy at Washington University and author of the novels The Tunnel and Omensetter's Luck explores the themes of his long writing life and looks at the work of some of his favorite writers—Gertrude Stein, Proust, Nietzsche, Henry James, and Kafka—as well as the unsympathetic Nazi collaborator Knut Hamsun. One of the finest essays is "The Aesthetic Structure of the Sentence," which builds from Gass's youthful relish for diagramming to his observation that sentences are "containers of consciousness."

The Expats by Chris Pavone '89 (Crown). Long-buried secrets undermine the characters' lives in Pavone's debut novel. When Kate's husband, Dexter, announces that they're moving from D.C. to Luxembourg—immediately—for a well-paying job, the lies and deceptions in their marriage come to light. But soon she finds even more problems under the surface of her idle expatriate life. The more her husband keeps closemouthed about the nature of his work, the more her suspicions grow. A new American couple seems eager to befriend them—but also vaguely menacing. As she uncovers the intrigue, Kate reveals her own guilty past.

Green Washed by Kendra Pierre-Louis '02 (Ig). We may use a canvas shopping bag at the supermarket, buy organic food, and switch to an electric car, but we still need to consume less if we want to halt environmental destruction. "The problem is that ‘green' is not an industry-defined term," writes Pierre-Louis, the sustainable development editor for the website Just means.com. "There is no standard to which a company must aspire to achieve sustainability." Her investigation of sustainable fashion, green building, and green energy shows that while such alternatives are important, we can't buy our way to a green planet.

Forgotten Country by Catherine Chung, MFA '05 (Riverhead). Janie's grandmother says she must watch over her younger sister, Hannah—the family has lost a girl in every generation in Korea. Years later, after the family has moved to America, Hannah disappears. In her debut novel, Chung, named one of Granta's New Voices, tells the story of Janie's search to find her sister and uncover family secrets.

Wide Open by Deborah Coates '77 (Tor). In short story writer Coates's first novel, Sergeant Hallie Michaels comes home on ten days' leave from Afghanistan to bury her sister, Dell, whose death has been ruled a suicide. Hallie refuses to believe Dell killed herself, especially when she encounters her ghost—and the ghosts of several missing women. Now she must unlock the mystery before her leave is up.

Saving Wright by Jeffrey M. Chusid (Norton). When Sam and Harriet Freeman commissioned Frank Lloyd Wright to design a house for them in Los Angeles, Wright built the Freeman House using his textile-block construction system. Later architects, including Rudolph Schindler, Richard Neutra, and Eric Lloyd Wright, modified the house to correct its design flaws. Chusid, former director of the Freeman House and an associate professor in Cornell's historic preservation planning program, tells about the efforts to preserve the meaning and materials of the house.

Cruel Optimism by Lauren Berlant, PhD '85 (Duke). Berlant, a professor of English at the University of Chicago, examines how the social democratic promise of the postwar period has retracted in the U.S. and Europe. She asks, "Why do people stay attached to conventional good-life fantasies—say, of enduring reciprocity in couples, families, political systems, institutions, markets, and at work—when the evidence of their instability, fragility, and dear cost abounds?"

Unspeakable Violence by Nicole M. Guidotti-Hernandez, PhD '04 (Duke). Investigating four historic flashpoints along the U.S.-Mexico borderlands in the nineteenth and early twentieth centuries, an associate professor of gender and women's studies at the University of Arizona shows how in each case violence was racially motivated.

Conversations with Wall Street by Peter Ressler '78 and Monica Mitchell (FastPencil Premiere). The CEO of RMG Search and the CEO of Good Business International provide the insider story of the financial crisis of 2008 and offer advice on how to prevent the next one.

Take a Deep Breath by Nina Shapiro '87 (World Scientific). The director of pediatric otolaryngology at the Mattel Children's Hospital at UCLA provides a comprehensive guide to children's breathing problems.