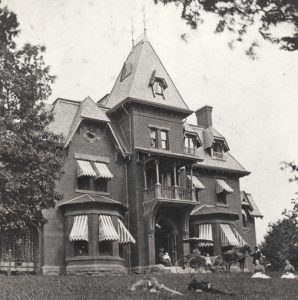 When A.D. White built his Gothic villa atop a knoll, it was one of a line of faculty houses at the edge of campus—convenient to the Arts Quad’s original buildings but isolated enough for privacy. Those other homes have long since been demolished, and—with Cornell’s footprint expanded in all directions—White’s mansion now lies at the heart of the Hill. Beloved as one of campus’s most beautiful buildings, it was home to Cornell’s inaugural president from its completion in 1874 until his death there in 1918. “The house as he built it and as he lived in it was more than a utilitarian home,” Kermit Carlyle Parsons, MRP ’53, wrote in his 1968 overview of Cornell’s physical campus. “It was, in [famed landscape architect] Frederick Law Olmsted’s terms, an example of how ‘an American of considerable responsibility’ should live and a symbol of the dignity of the presidential office—a sermon in brick and stone for the education and moral benefit of Cornellians.”

Design-wise, the three-story house—which is on the National Register of Historic Places—was a collaborative effort. Its plans were drawn up by a New York City architect, with input from White and alterations by two local luminaries: Charles Babcock, Cornell’s first professor of architecture, and William Henry Miller 1872, who went on to design notable Ithaca homes, churches, and more. The final product is distinguished, in part, by its intricate stone carvings; created by an artisan whom White dubbed magister de vivus lapidibus—“master of the living stones”—they include allegorical depictions of good and evil on the corbels of the entrance porch. “The President’s House, which can only be called a mansion, still pleases the contemplative eye,” Morris Bishop 1914, PhD ’26, writes in A History of Cornell. “The detail, the interior finish, betray White’s liking for fine workmanship and for uplifting symbolism.” 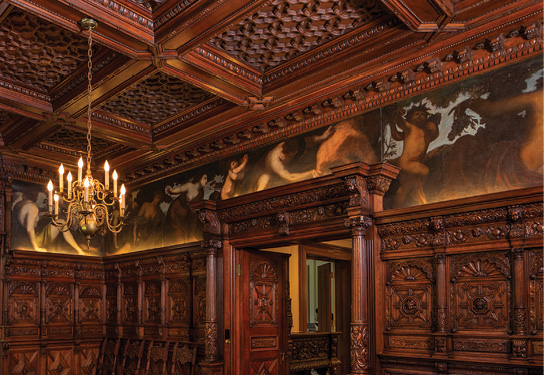 The dining room paneling, which dates from the mid-seventeenth century, isn’t original to the building; it was removed from a New York City residence and installed in 1953.Simon Wheeler

White’s vision was that the house would shelter all Cornell presidents, but only two others—Livingston Farrand and Edmund Ezra Day, the fourth and fifth—lived there. White still occupied it during the tenure of his successor, Charles Kendall Adams, and most of that of third president Jacob Gould Schurman. After Day left office, Deane Malott and his family opted to remain in the home in Cayuga Heights that the University had initially provided them (as White’s house by then required renovation). In 1953, it became the University’s first art museum, named in White’s honor. “[It’s] the sort of commemorative poetical thing that would have pleased him,” Parsons writes. “He had always wanted, but could never get, an art gallery at Cornell. Now his former home is one.” When James Perkins took office in 1963, the University purchased a 9,000-square-foot Tudor mansion in Cayuga Heights, dubbed Robin’s Hill, that has housed the University’s presidents ever since.

Once the Johnson Museum was completed in 1973, the A.D. White House became home to the Society for the Humanities, a research institute that brings together scholars from on and off campus. It hosts events in a room that was originally White’s library, whose volumes formed the basis of Cornell’s own collection. “It’s the perfect home for the society,” director Paul Fleming, a professor of German studies and comparative literature, says of the house. “A.D. White was a great humanist who did a lot to establish Cornell as a letters university. To have this beautiful, prominent building that brings in undergraduates, graduate students, faculty, and postdocs from across disciplines is continuing the legacy that he started.”