For rival sports teams, “cow college” is a handy alliterative epithet for anti-Big Red rabble rousing. But the joke’s on them: Cornell has long been proud of its agricultural bent, from the cider pressed at the Orchards to the blankets made from homegrown wool to the ever-popular recipe for Cornell Chicken Marinade.

The event, organized by CALS, was a follow-up to the “yogurt summit” that Governor Andrew Cuomo held in August. And in New York, yogurt is big business: the number of processing plants in the state (twenty-nine) has more than doubled since 2000. The amount of milk turned into yogurt has skyrocketed, from 158 million pounds to 1.2 billion—mostly due to America’s burgeoning yen for Greek-style yogurt, which requires three times as much milk as the conventional type. Currently a $6 billion-a-year industry in the U.S., Greek yogurt is expected to grow to $9 billion in the next five years—and panelists denied that it’s just another food fad. “It’s really a—no pun intended—culture change,” said Cathy Gaffney ’89 of Wegmans, the Rochester-based supermarket chain. 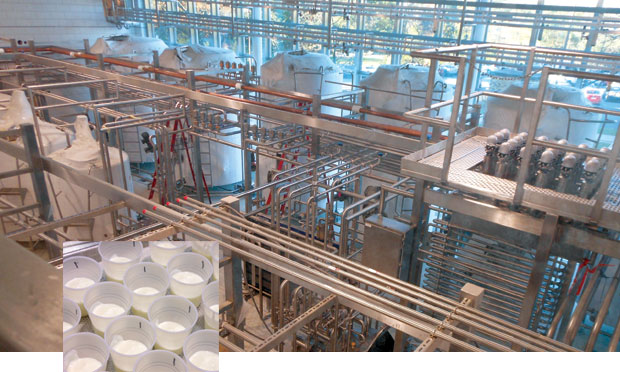 The yogurt confab included a stop at the dairy pilot facility in Stocking Hall, where senior extension associate Rob Ralyea, MS ’98, offered a tasting of five yogurt incarnations, from conventional to “curdy” (poorly blended) to Greek. Then visitors donned red hard hats and safety goggles for a tour of the dairy plant currently under construction; the project is part of a $105 million renovation of Stocking Hall, the dairy science building that opened in 1923.

Manager Jason Huck, MS ’06, offered a backstage look at the 12,000-square-foot plant, which will process and package milk, ice cream, juice, yogurt, pudding, and more. Its main production floor features floor-to-ceiling windows that look out on Tower Road, plus a gallery where visitors can gaze down on workers tending to the giant steel tanks—design features aimed to strike a balance between accessibility and sanitation. “As an educational facility, our goal is to bring people in,” Huck said. “But as a processing facility, our goal is to keep people out.”

Dairy Store fans, take heart: the shop, closed since mid-2011, is set to reopen sometime between March and May. It will feature more retail space, indoor-outdoor seating, and wi-fi, with a twelve-foot-tall wire milk bottle out front. Store mascots Cornellia and Cal—the fiberglass bovines that were cow-napped in 2006 and eventually returned—will be back, albeit more firmly secured. “They’re in a barn for the winter,” Huck said—precise location, undisclosed.

But more to the point: Cornell’s long ice cream drought is nearing its end. Asked about the ETA of Big Red dairy desserts, Huck flashed the tight smile of the eternally put-upon. “I’m being pressured to have ice cream available for Commencement and Reunion,” he said, “so we’ll have to have at least one flavor.”