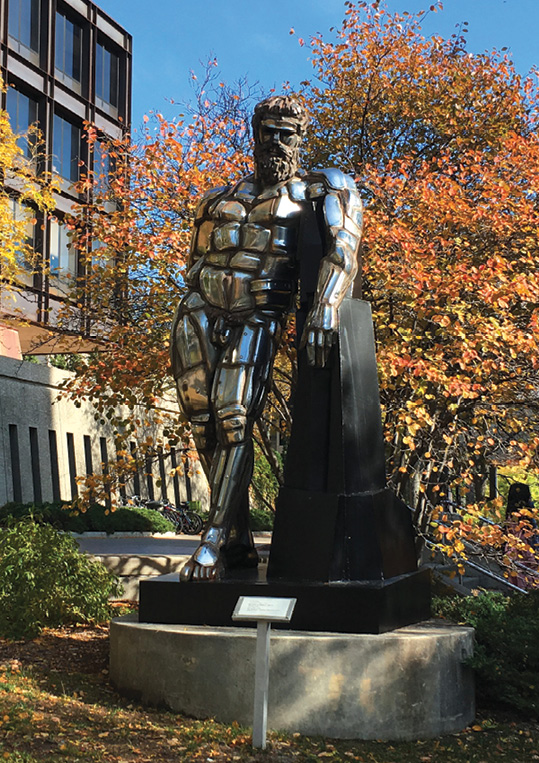 Man of Steel: The restored Herakles statue, back home between Uris Hall and the Statler. i.

He has stood outside the Statler Hotel for decades, ever weary from his labors. Fashioned from chrome auto bumpers, Herakles in Ithaka I is an homage to the Farnese Hercules—a marble statue, dating from second-century Rome, that depicts the mythical hero resting against his club.

Cornell’s Herakles (which bears the hero’s Greek name) was created by the late Jason Seley ’40, a longtime professor on the Hill who served as chairman of the art department and dean of the College of Architecture, Art, and Planning. A sculptor whose pieces are held by the MOMA and other prominent institutions, Seley was known for work—described in his 1983 New York Times obituary as “gently humorous”—made of materials salvaged from junkyards. “To me an automobile bumper is an offering of nature’s abundance,” Seley once observed. “I am as much concerned with its prehistory as the wood-carver with the growing tree.”

The eleven-foot-tall Herakles—in which those automotive cast-offs form the hero’s massive, angular muscles and other features—was completed in 1981 and installed outside the Statler two years later. And though Greek myths may be eternal, chrome isn’t: the intervening years, not to mention the Ithaca weather, took their toll.

Jump ahead to September 2015, when Bob Blakely ’63, BME ’64, MBA ’65—who studied sculpture under Seley—was visiting campus for the inauguration of President Elizabeth Garrett. A former trustee and current Presidential Councilor, Blakely has stayed at the Statler countless times, always admiring his mentor’s masterwork. “I think it’s extremely effective,” Blakely observes. “So much of the sculpture of the [classical] period is lifelike and in marble or stone, and here is something in a totally different medium. Just in terms of the scale and size, no one can ignore it. And it’s in a prominent place on campus, so it stands out in an important way.”

But that September, Blakely’s wife, Diane “Pinky” Keehner, noted that Herakles had seen better days. It suffered from, among other wear and tear, lamentably rusty feet—so she suggested spearheading and funding a restoration effort. The statue, which is officially part of the Johnson Museum’s collection, was removed to a workshop in spring 2016; it made a triumphant return to campus in late October.

In addition to being buffed and coated, Herakles got new drainage holes to prevent water damage. Openings that had allowed chipmunks in—they’d entered through the eyes and nested—were closed off. Deteriorated parts were replaced with vintage chrome bumpers, integrated using welding techniques that mimicked Seley’s own. “I move them around. Put them together. Add. Subtract,” Seley said of working with his signature materials. “Then, if all goes well, something exciting begins to happen. It is like a voyage of discovery, like going somewhere one has not been before.”