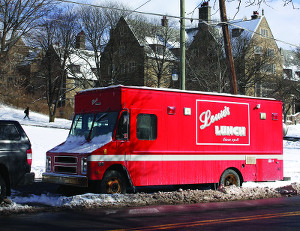 Meals on wheels: The truck today. While “since 1918” is emblazoned on its side, the actual founding year may have been lost to history.Lisa Banlaki Frank

What has four wheels and some of the best French fries in Ithaca? If you lived on North Campus during your time on East Hill, you probably know the answer: Louie’s Lunch, the red-and-white food truck that has long stood at the corner of Wait and Thurston avenues.

Offering a wide range of delights—from Philly cheesesteaks to salads, milkshakes to breakfast sandwiches, mozzarella sticks to garlic bread—this campus stalwart is celebrating its centennial this year, having satisfied Cornellian cravings for comfort food in various vehicular forms since approximately 1918 (the founding year noted on the truck). Louie’s serves two iconic local takes on the cheeseburger—the Bo Burger (which sports a fried egg) and the Tullyburger (topped with onion, lettuce, tomato, and mayo); many other menu staples, like the TBBC (turkey breast, bacon, and cheese), have similarly been around for decades. “It’s so much fun when alumni come back and get what they had twenty years ago or more,” says Ron Beck, the truck’s owner since 1997. Newer fare includes the Maven, a fried chicken sandwich that boasts an unorthodox combination of buffalo and barbecue sauces. Savvy diners know to order off the truck’s “underground” menu—where the Maven resided until it got too popular—and how to find its hidden location on the Louie’s website. “We treat it like Fight Club,” says Beck. “Customers can’t ask questions about it.” 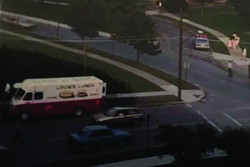 Louie’s in an earlier incarnation parked in the same spot on North Campus circa the Eighties. Photo provided

According to a history on the website, the truck’s namesake, Greek-born Louis Zounakos, came to America to escape the Balkan Wars in 1912–13. “He settled in Brooklyn,” it says, “where he apparently sold his mother’s gin during the era of Prohibition.” At some point between 1916 and the early 1920s, legend has it that Zounakos ventured to Ithaca and began peddling food from a cart he pushed around campus. He purchased his first truck in the Forties—parking it across the street from Risley Hall, where Louie’s still operates. Over the years, at least six vehicles have borne the name, including a “Louie’s Lunch Jr.” truck that served West Campus into the mid-Sixties. (The current one, put into service in 2015, is a repurposed 1985 fire refscue vehicle.)

What was your favorite Louie’s experience? Share in the Comments section below!

Though the extensive menu and low prices—a hamburger goes for $2.85—have been enticing customers for generations, it’s the truck’s hours that make it a student magnet. Most nights, the grill runs until 3 a.m., offering a convenient option both for late-night studiers and for revelers looking for a greasy meal after an evening of merriment. “During finals week, it can get interesting,” says Devin Conathan ’08, BA ’10, who worked on the truck for three years (and invented the Maven). “There are the people who are getting food so they can stay up writing their paper, or just stressing out and forgetting to eat until 2 a.m. Then there are the people getting food because they’re celebrating being done.” Indeed, Louie’s alumni have many colorful memories of their days—and especially nights—working on the truck. “People at various levels of intoxication would think they could handle any amount of spiciness, but the ‘triple-X’ sauce is absurdly spicy,” Conathan recalls. “Many times, people would take a bite and try to pretend it wasn’t affecting them—while they were sweating bullets.”