A century ago—in April 1920—the Alumni News reported that Robert Treman 1878 had just given a priceless gift to the State of New York: an extraordinary piece of land then known as Enfield Glen, located about five miles southwest of campus. “The deep-cut gorge and waterfall at Enfield, features of special interest to the geologist, are the most picturesque in the region about Cornell, comparing favorably, except in size, with Watkins Glen,” the story noted. “These natural beauties are now to be preserved in a state park.” Generations of Cornellians and others have since flocked to the park—named in honor of its benefactor in the late Thirties—for class gatherings, to study the area’s natural features, or simply to hike the gorge’s winding trails, take in the sweeping views, and swim in its stream-fed pool.

An Ithaca native, Treman had spent many hours in Enfield Glen in his youth, arriving by carriage to meet friends for picnics and strolls through the woods. A disappointing visit in 1915 revealed that the site sorely needed maintenance, so he and his wife purchased forty acres that included the old mill at the top of the gorge, the 115-foot-tall Lucifer Falls, and much of the ravine. They brought in a landscape architect to develop the area with stone bridges, staircases, and railings that blended into their surroundings. Over the next few years, the couple acquired more contiguous land, ultimately giving the state some 387 acres to establish Enfield Falls Reservation. A commission to oversee the park was created, with Treman as its chairman and Cornell horticulture professor Liberty Hyde Bailey as a member. 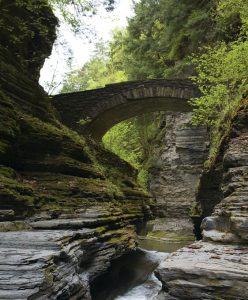 One of the iconic sections of Treman State ParkRobert Barker/UREL

The park got another facelift thanks to the Depression-era Civilian Conservation Corps, which offered jobs repairing and improving government properties; workers built walls, roads, bridges, water systems, and more. Today, the park comprises more than 1,000 acres featuring nine miles of trails, a dozen waterfalls, multiple pavilions and playgrounds, and camping and RV facilities. In 2015, Treman’s natural pool was the New York entry on the Weather Channel’s list of each state’s best places to swim, and the park currently holds the number-one spot on TripAdvisor’s tally of things to do in Ithaca. (Touring Cornell ranks fourth.) “Recent visitors called Robert Treman the best state park in the region thanks to its gorgeous views,” observes U.S. News & World Report’s online travel guide, “but caution that you must be in good shape to hike up the steep trail to the upper falls.”

Treman himself was an athlete on the Hill—he captained the varsity baseball team—as well as a mechanical engineering major and a member of the Quill and Dagger honor society. After graduation, he became a prominent member of the Ithaca community: chairman of the family hardware business, a volunteer fire captain, president of Tompkins County Trust Company, and eventually director of the Federal Reserve Bank of New York. Treman’s ties to the University remained strong; he served on the Board of Trustees from 1891 until his death in 1937. And he and his wife continued to help preserve the region’s natural wonders, acquiring and donating portions of Cascadilla Gorge and of Buttermilk Falls and Taughannock Falls state parks. “He was a fine public servant,” New York Governor Herbert Lehman wrote in a telegram to Treman’s widow, “who gave of himself to all worthwhile causes with rare devotion and self-sacrifice.” 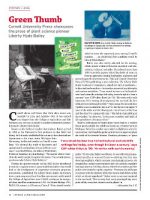 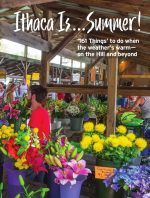 More things to do in Ithaca