For decades, a sold-out crowd of several hundred has gathered each winter for one of the Big Red’s most joyful celebrations: the Pan-Asian Banquet. Hosted by the Cornell Asian Alumni Association (CAAA, pronounced “C-triple-A”) and usually held in a restaurant in Manhattan’s Chinatown, the evening includes such pleasures as a multi-course feast and a traditional lion dance, in which performers in intricate and colorful costumes mimic the animal’s movements to summon luck and prosperity for the new year. Proceeds from ticket sales—typically around $150 apiece—support CAAA’s undergraduate scholarship programs. 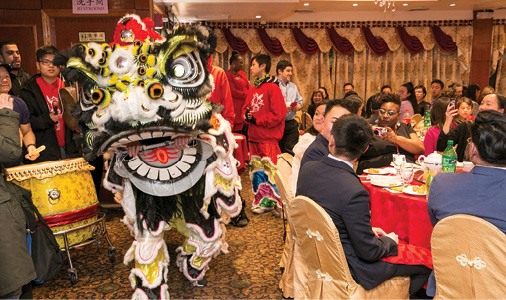 The annual Pan-Asian Banquet in 2019. This year, a virtual version of the celebration included a remote cooking lesson.Provided

But this year, since the COVID pandemic prevents large in-person gatherings, CAAA had to get creative: for the first time, the banquet was held virtually. Hundreds tuned in to the online event (which had no admission charge) from the U.S., Japan, China, Singapore, India, Canada, Europe, and elsewhere. Highlights included a cook-along with celebrity chef Ming Tsai, MPS ’89, who showcased his recipe for “MingsBings,” a veggie-stuffed take on Chinese flatbreads. A custom tea blend designed by Michael Harney ’77 of Harney & Sons Fine Teas was sold in advance, with proceeds going to the scholarship fund; a home meal kit with the fixings for a four-pound batch of stir fry was also available. “From all over the world, we were able to eat the same dinner and drink the same tea together,” says CAAA president Matt Palumbo ’83, BS ’86. “That helped make it feel a little less virtual and a little more real.”

One of the oldest Asian alumni associations in the Ivies, CAAA—which marked its thirtieth anniversary last summer—is a thriving network of nearly 30,000 Cornellians from countries around the globe. Through events and other offerings, it works to connect alumni, current students, and the University, with the aim of celebrating Cornell’s Asian community and enhancing life on the Hill. “CAAA is multigenerational, multiracial, and multinational,” says Palumbo, who adds that it’s open to members who are not of Asian heritage. “Our goal is to create as big a tent as possible.”

In a typical year, CAAA hosts a range of social and professional events for students and alumni, from dance parties to book readings. During the pandemic, it has focused on virtual programming, offering livestreamed lectures with Cornell faculty, online museum tours, even tae kwon do lessons via Zoom. In November, more than 200 alumni across eight decades attended a virtual celebration for Diwali, the Hindu festival of lights. And this summer, CAAA members will gather for their own Reunion celebration, as they have every three years since the early Nineties (though the 2021 festivities will be remote). “CAAA exposes people to different walks of alumni life,” says past president Vernice Arahan ’14. “The organization is so diverse, and these events allow us to have conversations across cultures.”

Though Asian and Asian American students now represent about 20 percent of Cornell’s student body, the club was founded by alums who remember what it was like to be a distinct minority on campus. And Eugenie Shen ’78 recalls that after she graduated, she noted a lack of Asian representation in regional clubs, Reunions, class officer positions, and other Big Red networks. “At that time, there were some 2,500 Asian alumni, including some prominent and influential people,” says Shen, who spearheaded CAAA’s creation and recruited its first members. “But they weren’t involved—and I wanted to change that.”

Though Palumbo and Shen acknowledge that Cornell has made great strides toward inclusion in recent decades, one of CAAA’s goals remains supporting current students—including challenging harmful, lingering stereotypes. “A lot of the time, an Asian student is automatically assumed to be a computer science major or some kind of engineer,” says Palumbo, “and that’s just not the case.” In the Aughts, CAAA endowed the Asian & Asian American Center, which offers advising services, workshops, meeting space, and more. Club members have partnered with the University Library and Johnson Museum to offer exhibits with an Asian focus, and they’re currently working with the Botanic Gardens to plan an Asian summer garden featuring Japanese cherry trees, peonies, and a lotus pond. Those and other efforts support another of CAAA’s missions: aiding international students who may experience culture shock living in Upstate New York, far from home. “We work hard to create a community,” Palumbo says, “so people never have to feel alone.”