On the Saturday night of Reunion weekend, alumni gather in the lobby of Goldwin Smith Hall to hear a capella groups perform traditional Cornell songs and other popular tunes. Among the singers, one group stands out—all male, all clad in matching green polo shirts, and all from the classes of ’58 to ’73.

Although the Sherwoods haven’t been an official student group for four decades, its alumni have long returned for Reunion performances—offering a repertoire that ranges from the Alma Mater to show tunes to Beatles songs. “It’s kind of magical,” member Fred Kewley ’65 says of the shows, held in Goldwin Smith and elsewhere over the weekend. “It takes people right back to the time they heard that music on campus.” The group has also released two CDs, Try to Remember and Old Friends, available online or at the Cornell Store; they feature songs originally recorded on vinyl during their student days. 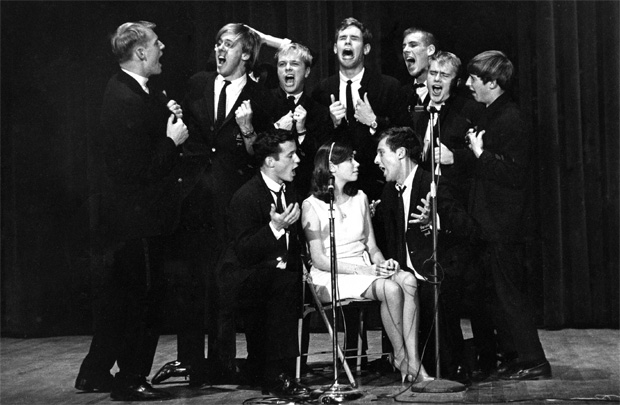 Founded in 1956 by members of the Glee Club, the Sherwoods were active on campus until the mid-Seventies. They offered a varied act that included stories, jokes, and skits; in addition to a musical audition, aspiring Sherwoods had to demonstrate that they could make current members laugh. The group was known for its original six- to eight-part harmonies, which required long hours of rehearsal to master. “When the football players went to the field and the hockey players went to the rink, we were going to Willard Straight Hall every day to sing for two hours,” says Ron Johnson ’68, the group’s business manager. It paid off; eventually, the Sherwoods found themselves in demand on campus and even around the world, performing in the Caribbean, Europe, and Asia. But when the popularity of a capella waned in the Seventies, the group disbanded on campus. The Sherwoods alumni still give concerts, however—raising more than $100,000 for charity over the past fifteen years. Their next show is scheduled for Cambria, California, in October. “We are an older group, but we don’t act like it,” says current member Peter Bloom ’58. “If our sound starts to dissipate we’ll stop, but that hasn’t happened yet.”

The Sherwoods are part of a long-standing a capella tradition at Cornell, which is currently home to a dozen groups—some all male, some all female, some co-ed. They include Key Elements, After Eight, Cayuga’s Waiters, the Hangovers, the Class Notes, Last Call, and Nothing But Treble. In recent years, the University even had a fictitious a capella group; on NBC’s “The Office,” character Andy Bernard—who regularly boasted about both his singing voice and his Cornell degree—performed with a group dubbed Here Comes Treble. Going to an a capella performance has been deemed a quintessential part of the Cornell experience: it holds the ninety-fourth spot on the legendary list of “161 Things Every Cornellian Should Do.”