After a long week of classes, Cornellians have a variety of choices for how to spend a hard-earned Friday night. Dinner in Collegetown? A movie at Cornell Cinema? How about . . . stargazing? Every week, if the Upstate skies are clear, members of the University and local communities can trek to North Campus to view the skies at Fuertes Observatory, which is celebrating its centennial this year.

Fuertes’s main attraction is its refracting telescope, twelve inches in diameter, that is nestled under its retractable dome. Depending on the eyepiece, the telescope is capable of magnifying objects from between fifty times to more than 600; viewers can see the rings of Saturn, the moons of Jupiter, the polar ice caps on Mars. Installed in 1922, the telescope is one of the few of its kind whose workings have remained unmodified, notes Sam Newman-Stonebraker ’17, president of the Cornell Astronomical Society, the student group that has led the Friday observations for half a century. In warmer weather, Newman-Stonebraker says, the weekly observations draw as many as 300 people. “Not all at once,” he hastens to add. “The building would sink.” 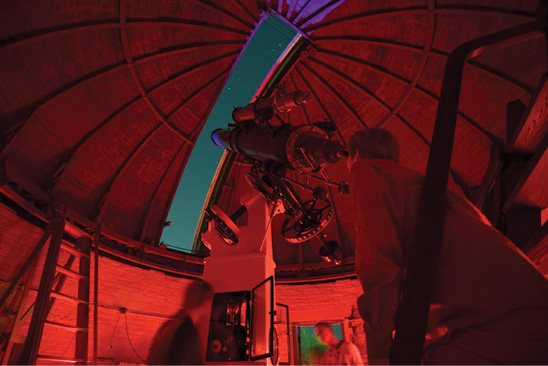 Although Fuertes is no longer employed for academic research—and other University-affiliated telescopes outside Ithaca offer more powerful instruments and far less light pollution—it’s still used by intro astro classes for observing star clusters and other phenomena. It’s also a popular field trip stop for local elementary and middle schoolers. “A telescope is a nice thing to introduce young kids to the idea of science,” says astronomy professor Phillip Nicholson, the Society’s adviser. “Even quite small children can appreciate looking up and seeing things that you can’t see with the naked eye.”

The observatory’s newest feature—a museum created by Society members—was completed in fall 2015. Housed in two adjacent rooms, it showcases equipment dating back to the late nineteenth century. Fuertes was the fifth and final observatory built on campus under the supervision of Cornell’s civil engineering department, which—in an era when stars served the purpose now filled by modern GPS—used it for large-scale land surveying. At the telescope’s 1923 dedication ceremony (as civil engineering and astronomy professor Samuel Boothroyd recalled in a written description of the event) guests were invited to see the instrument “and view Jupiter and Saturn and the Globular Cluster in Hercules through it. A goodly number availed themselves of the opportunity and were favored with clear skies and good ‘seeing.’ ”

On the Daily Sun’s ever-evolving list of “161 Things Every Cornellian Should Do,” a visit to Fuertes currently ranks at Number 17. If you missed out as a student, you can catch up during Reunion, Homecoming, or another return visit to campus—but be sure to check the forecast before heading out. “We get a surprising amount of people who come here on a rainy, cloudy night and ask, ‘Can we see anything?’ ” Newman-Stonebraker notes with a laugh. “I’m like, ‘Nope. The telescope can only see as much as you can.’”