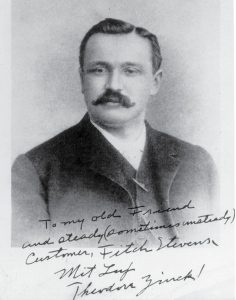 When Big Red alumni hear the first few notes of “Give My Regards to Davy,” most can sing along with perfect recall—even if they’re a little fuzzy about the meaning of the lyrics’ last line: “We’ll all have drinks at Theodore Zinck’s when I get back next fall!”

As a Cornellian phenomenon, Zinck’s traces its roots to the proprietor of a downtown Ithaca hotel bar in the late 1800s. In those days—before Collegetown offered closer alternatives for imbibing—students would gather there after class for conviviality and five-cent beers served by the notable barkeep, a German immigrant named Theodore Zinck. “He was a character. He had a thick accent and was legendary for his memory of customers,” says Cornell history expert Corey Earle ’07. “Alumni would come back to visit years later and he would call them by name and say, ‘Hey, you still owe me a buck fifty!’” 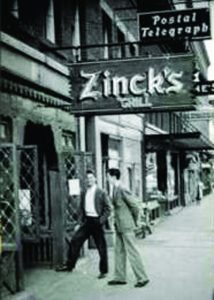 One of the Ithaca watering holes named in his honor.
Photo: International Spirit of Zinck’s Night

Though that bar closed in the early 1900s, a handful of establishments around Ithaca bore the Zinck’s name over the following decades, until the last closed in 1967. But its memory lived on, and eventually spawned a new Cornell tradition. In fall 1973, members of the senior class created a social club called the Spirit of Zinck’s. Thirsty seniors could consult the Daily Sun for the location of that week’s meeting, usually a far-flung taproom like the Dryden Hotel or the Rongovian Embassy in Trumansburg. Every Thursday evening, after attendance had been duly noted on a cocktail napkin, the revelers would get down to business—namely, selecting the location of the following week’s festivities. “We wanted to bring seniors together in a casual setting,” says John Foote ’74, the society’s co-founder. “We appreciated that we only had a little bit of time left on the Hill and we wanted to get to know our classmates better.” 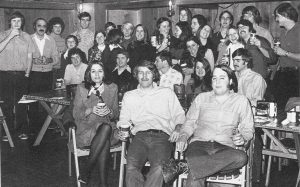 A meeting of the Class of ’74’s Spirit of Zinck’s social club.
Photo: 1974 Cornellian

Over the past few decades, that tradition has morphed into a much larger annual celebration: International Spirit of Zinck’s Night. On the third Thursday in October—this year, it’s the 19th—some 4,000 alumni gather in roughly 100 bars, restaurants, and pubs for a Big Red happy hour. The events are concentrated mainly in dozens of cities in the U.S., but also take place worldwide. From Australia to Ireland, Japan to Djibouti, Hong Kong to Ithaca, Cornellians meet for a night of trivia, door prizes, singing Big Red songs, and celebrating East Hill memories with fellow grads. “It connects alumni across the years,” says Foote. “It’s a wonderful way to meet and chat with Cornellians of every description.”