After an intense, year-long competition, the City of New York has chosen Cornell, in partnership with Technion-Israel Institute of Technology, to create a new campus—in fact, a new kind of campus—dedicated to technology and enterprise on Roosevelt Island. We are honored to have this opportunity and are on a fast track for the project, with the first students to begin working with faculty in leased, offsite space in the city by next fall.

A critical factor in Cornell's success was the very vocal (and visible) enthusiasm of alumni and students. Nearly 50,000 alumni live in the New York metropolitan area and, as Deputy Mayor for Economic Development Robert Steele quipped, it seemed that all of them called his office to express their support for Cornell's proposal.

Many of our trustees, overseers, and other alumni used their considerable networking skills to make the city aware of alumni support for Cornell's proposal, signing up for all sorts of city-sponsored events just so they could talk about Cornell. Other distinguished alumni with expertise in technology and enterprise provided strategic guidance to Provost Kent Fuchs, deans Dan Huttenlocher of Computing and Information Science and Lance Collins of Engineering, and associate engineering dean Cathy Dove, MBA '84, who led the Cornell effort.

One of the most remarkable aspects of alumni involvement was the leadership of younger alumni in exploiting the power of social media to spread the word about our bid. Danny Stein '92, Gus Warren '94, Keith Grossman '02, and Jeremy Snepar '01 mobilized more than 20,000 alumni, parents, and friends to sign an online petition in support of our proposal through Twitter, Facebook, and e-mail. The group also collaborated with a current undergraduate, Jesse McElwain '13, to garner support in Ithaca.

Cornell students passed resolutions in support of the New York City campus, and the Student Assembly, under the able leadership of Natalie Raps '12, made a video endorsing the proposal that was shown in Schoellkopf Stadium during the Homecoming football game. And, with perfect timing, students in Cornell University Sustainable Design organized a conference in New York City for the day after our proposal was submitted. Then, on December 16—at a crucial moment in the review process—the Atlantic Philanthropies and its founding chair, Chuck Feeney '56, made an extraordinary $350 million gift to support Cornell's development of the tech campus, calling it "a once-in-a-generation opportunity . . . to create economic and educational opportunity on a transformational scale." 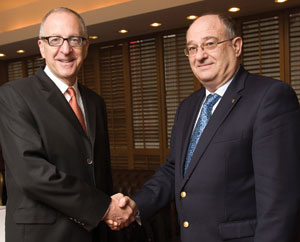 In creating the tech campus, there will be no diversion of resources from Ithaca. Instead, there will be many more opportunities for faculty and students in Ithaca-based programs and faculty and students in New York City to participate in mutually beneficial collaborations as called for in our strategic plan. In fact, I believe that, in time, the tech campus will generate priceless exposure and demand for more of what Cornell has to offer in Ithaca.

There will also be more opportunities for Cornell's entrepreneurial alumni in New York City and beyond. Over the years our university has nurtured many individuals who have turned ideas and inventions into thriving businesses. In the past five years alone, Cornell alumni have created more than 2,600 companies—employing over 34,000 people and raising over $10.6 billion in new capital—and we expect an even higher rate of company creation, thanks to the new campus's focus on technology innovation and entrepreneurship. Some 2,500 alumni have already expressed an interest in mentoring student projects connected to the new campus and in making investments in companies started by students and faculty there. And once the new campus is up and running, there will be space available for alumni events and activities.

More than a year before an applied science and technology campus in New York City was on anyone's radar, the University had endorsed an expanded commitment to public engagement in its strategic plan: "Cornell has a unique capacity to interweave public engagement with its educational and research programs for students, given its status and history as a private university with a land-grant mission. An integration of fundamental science with application of that knowledge and its use for the public good should be a distinguishing feature of Cornell programs." Today, as Cornell expands its public engagement with this new land grant on Roosevelt Island, those exhortations seem prophetic.

I thank you for your part in this game-changing venture for New York City and Cornell and invite your continued involvement.