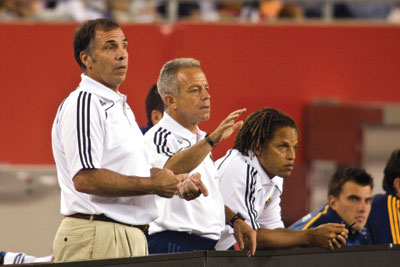 That wasn't snow falling in Los Angeles last November. It was confetti. As a sellout crowd of nearly 31,000 fans cheered wildly, Bruce Arena '73, head coach of Major League Soccer's Los Angeles Galaxy, lifted a shiny, silver trophy over his head. His team had just beaten the Houston Dynamos 1-0 in a riveting MLS Cup championship game, leading some to wonder if L.A. might boast the best collection of talent in league history. "We Are the Champions" blared throughout the Home Depot Center, the Galaxy's home arena in Carson, California, where the team hadn't lost all season. Arena smiled broadly. Mission accomplished—again.

As if it had been scripted, the game-winning goal was scored in the 72nd minute as a joint effort by a trio of superstars who had made the Galaxy the face of the league, a big-market team with lofty expectations—sort of the Miami Heat of professional soccer. David Beckham (the iconic English midfielder who led the team in assists and paparazzi) flicked a header to Robbie Keane (Ireland's all-time leading goal-scorer), who fed Landon Donovan (L.A.'s leading scorer and the most accomplished American in soccer history). As Donovan, the MLS Cup MVP, put the ball into the back of the net, Arena raised his fists in celebration. "They are good players," he told the assembled press after the game, stating the obvious, "and they play together as a team."

That team was only a twinkle in Arena's eye in 2008, when he took over as general manager and head coach of a franchise in disarray. He changed the culture by first opting for the familiar—hiring trusted lieutenant Dave Sarachan '76 as associate head coach, extending a partnership that has achieved success over nearly three decades. Together, they overhauled the team, compiling an eye-catching—and expensive—roster. "Pound for pound," says Sarachan, a 2009 Cornell Athletic Hall of Fame inductee who coached the Big Red for a decade beginning in 1989, "this is the most talented and deepest team that Bruce and I have ever had."

That's saying something. The Galaxy is the fourth incarnation of the Arena-and-Sarachan traveling show, each effort offering a jolt to American soccer on a different stage. First, Sarachan served as Arena's assistant at the University of Virginia, where they won five national championships in 18 seasons, turning a program with no tradition and one scholarship into one of the most successful in college sports. A few years later, Sarachan joined the staff of Arena's D.C. United team, which had won the first two MLS titles in 1996 and 1997. With Sarachan on board in 1998, D.C. became the first U.S. team to win the CONCACAF Champions Cup, featuring the best teams from the top leagues in North and Central America. That win announced American pro soccer as a force in this hemisphere, but the third stop on the coaching tandem's tour showed that Americans could compete globally, as the U.S. national team made a run to the 2002 World Cup quarterfinals with Arena steering the ship and Sarachan as his first mate.

Their success may be a product of contrasting styles, with the amiable Sarachan serving as a player-friendly presence alongside the all-business Arena. But it works, and the two men have developed a coaching shorthand over the years. "We complement one another. I know his strengths and weaknesses, and he knows mine," says Sarachan, who previously served as head coach of the Chicago Fire. "It's almost like Radar in ‘M*A*S*H.' I tend to know what he's going to say before he says it."

Following the championship, the Galaxy of stars enjoyed a few more weeks as a unit, undertaking a friendly tour of Indonesia, Australia, and the Philippines before Beckham's five-year contract with L.A. ran out in December. The future was in doubt. Would Beckham return? (In January, he announced that he would.) Will the sixty-year-old Arena, the MLS coach of the year twice in the past three years, keep coaching in L.A.? (So far, it appears that he will.) Will Sarachan get another chance to be an MLS head coach? (No news on that.) Whatever happens, U.S. soccer's dynamic duo has proved once again that they can lead a team to the top and boost the global credibility of American soccer. All the world's a stage. . . .

HOOPS & HOPE The end of 2011 also marked the end of a unique international experience for former women's basketball player Claire Perry '07. A captain on the 2006–07 Big Red squad, Perry spent the past two years in Durban, South Africa, as a PeacePlayers International fellow. During her time with the global nonprofit organization, which has been described as kind of a Peace Corps for basketball, Perry worked closely with the girls' basketball program and helped grow the group's leadership development program. Upon leaving in December, she recounted her experience in a blog: blog. peaceplayersintl.org/ 2011/12/30/goodbye-peaceplayers-international-south-africa/.

MILESTONE In a January 3 game against the University of Maryland, guard Chris Wroblewski '12 became the 24th player in Cornell men's basketball history to surpass 1,000 points. An Ivy League award winner in each of his first three seasons, Wroblewski was the 2009 Ivy League Rookie of the year after playing a key role on the outstanding Big Red team that reached the NCAA Sweet 16. He led the league in three-point shooting as a sophomore and has ranked among the top five throughout his career.

HONOR ROLL A pair of Big Red football players received national recognition for their efforts during the 2011 season. Defensive back Nick Booker-Tandy '12 was named second-team Academic All-American by the College Sports Information Directors of America. Booker-Tandy had three interceptions and 27 tackles while earning a 4.0 GPA in applied economics and management. Wide receiver Shane Savage '12 was named to several postseason All-American squads after leading the league with 65 receptions for 1,080 yards and 12 touchdowns. He was a third-team pick on the Associated Press team and joined quarterback Jeff Mathews '14 as a second-team selection on the Beyond Sports Network squad.

BIG RED REUNION Three-time All-American Rob Pannell '12 was the first pick of the 2012 Major League Lacrosse draft on January 13—but he was not the only Cornell player making news that day. Minutes before selecting Pannell, the Long Island Lizards pulled off a trade, getting former All-American midfielder Max Seibald '09 from the Denver Outlaws. This will likely allow the pair to reunite after Pannell's collegiate season ends. Three other Big Red players also heard their names called during the MLL draft: Roy Lang '12 was chosen by the Rochester Rattlers, Chris Langton '12 was picked by the Ohio Machine, and J. J. Gilbane '12 went to the Boston Cannons.

SPEED SKATER Cornell was represented at the 2012 NHL All-Star Weekend in Ottawa, but if you blinked you may have missed it. Colin Greening '10, who plays for the Ottawa Senators, posted the best time in the Fastest Skater event, getting around the ice in 12.963 seconds during his heat. He edged Carl Hagelin of the New York Rangers by three one-hundredths of a second in that heat, but Hagelin got revenge in the final, beating Greening by almost a tenth of a second. Going into the All-Star break, Greening had 11 goals and 15 assists in 52 games with the Senators.