Fashion designer Gizelle Begler ’08 is in high gear in her lower Manhattan office, finalizing details for an upcoming photo shoot of her latest collection. On this January morning, she slips on one of her most recent creations: a nude-colored silk cap heavily embroidered with black flowers. It conceals her platinum blonde hair, even more so when she drapes the attached black lace around her face like a veil. It’s a glamorous look, one she says was inspired by “old Hollywood,” pointing to a bulletin board covered with pictures of silver screen stars like Hedy Lamarr and Grace Kelly.

It’s also a very different look for Begler’s employer, Haute Hijab, an online company that sells fashionable head coverings for Muslim women and others who dress modestly. With the motto “Every woman has a right to wear hijab and be stylish,” it launched in 2010 with $20 headscarves in a variety of prints and hues, pushing beyond the traditional black. With business booming—Haute Hijab recently hit $1.5 million in total sales—Begler was hired full-time as creative director last fall to expand its offerings. First up: a luxurious array of $200 to $300 hand-sewn, embellished hijabs for weddings or black-tie events that debuted this winter, and which Glamour.com described as “beyond gorgeous.” “We’ve mastered the hijab in its most basic form, but we’re not meeting all the needs of hijabi women,” says Begler. “If a woman is wearing a beautiful gown, why wouldn’t she want to put something just as beautiful on her head?” 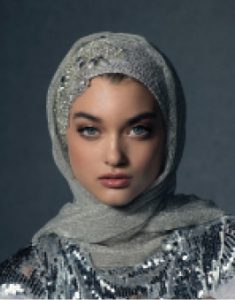 These days, retailers are paying more attention to Muslim consumers, who spent an estimated $243 billion on apparel in 2015—a figure projected to reach $368 billion by 2021. Brands such as Dolce & Gabbana, Uniqlo, and Burberry have introduced lines that are trendy but meet religious guidelines for modest dress. Last summer, the Gap featured a Muslim woman—wearing a Haute Hijab headscarf—in an ad campaign. For Begler, who spent years as a fashion designer in the Middle East—where she created couture ensembles for princesses, socialites, and celebrities—the same level of detail and care goes into designing a hijab as a high-fashion frock. “You have to make sure it doesn’t slip. You have to make sure it’s breathable and can be worn for eight hours straight,” she says. “It’s not just some accessory you put on as an afterthought.”

It’s also a very public symbol of Islam at a challenging time: the Pew Research Center recently found that nearly half of Muslim Americans surveyed said they’d experienced at least one incident of discrimination in the previous twelve months. Begler is devoted to her faith, fasting during Ramadan and praying five times a day. But she only wears a hijab at a mosque or when visiting a country like Saudi Arabia, where it’s required by law—mainly, she says, because she feels that she already dresses conservatively. (On this day, she’s wearing a long-sleeved button-down with a sparkly statement necklace, black skinny jeans, and Converse sneakers.) “I guess I feel putting on a headscarf isn’t really necessary,” she says. 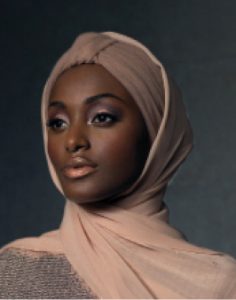 Begler did don one, however, for the 2017 Women’s March in Washington, D.C., crafting a crystal-studded hijab from an American flag—an item so eye-catching that her photograph was featured everywhere from the New York Times to “Full Frontal with Samantha Bee.” “I wanted people to see Muslims are everyone,” she says. Likewise, she hopes her work for Haute Hijab will help dispel misconceptions about her faith. “I think it’s really important in this climate to normalize the hijab,” she says. “The women who choose to wear it—especially in this society—are very strong. They don’t have to wear it and they still choose to. That’s amazing, and they deserve to have just as many fashion options as someone who doesn’t wear a hijab.”

One of her friends from East Hill, Denise Green ’07, now an assistant professor of fiber science and apparel design (FSAD) and director of the Cornell Costume and Textile Collection, calls Begler a trailblazer. Green says that Begler is shaking up the industry by making Muslim women and others rethink what it means to dress modestly. This spring, she’ll have some of her students create headscarves for a class competition that Begler will judge, with Haute Hijab selling the winning design. Says Green: “She’s fighting against the stereotype that traditional dress is static—that it’s outside the world of change.”

Born in Manhattan to a mother who emigrated from Egypt and a German-American father, Begler was raised in Westport, Connecticut, and grew up singing opera, painting, and drawing. On the Hill, she majored in FSAD and was the first Cornell student to win an award from the YMA Fashion Scholarship Fund, an influential industry nonprofit. She went on to study couture gown design in Florence, Italy, with internships at Tommy Hilfiger and Giorgio Armani, landing a head designer position after graduation at a New York-based company that makes girls’ party dresses. In 2010, a friend urged Begler to move to Kuwait, where her love of embellishment fit perfectly with the opulent fashion culture. Soon she was designing for the royal family. “For the first time, people were looking at my sketches and saying, ‘Why don’t you add more flowers here? Or more diamonds there?’” she says with a laugh. “It was great.” Within six years, she’d relocated to Cairo and built a thriving bridal and formalwear company. “We were dressing the Angelina Jolies of Egypt,” she says. 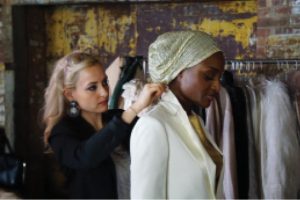 But then her mother was diagnosed with amyotrophic lateral sclerosis (ALS, also known as Lou Gehrig’s disease), and Begler returned home to help care for her. She briefly worked at Hanes before meeting Haute Hijab’s owners at a networking event for Muslim-American entrepreneurs in New York City. Moving forward, Begler expects to put out additional lines that include hijabs for professional women. For example, she says, “a lot of Muslim doctors reach out to us and say things like, ‘Every time I use a stethoscope it gets caught. What can I do?’ ” But whether she’s designing a head covering for a formal affair or a day at work, Begler’s goal is the same. “Our customers want to look fabulous, and they want their hijab to be a part of that,” she says. “I hope our pieces help them feel confident, beautiful, and proud of who they are.”