On the first day of November 2017, Brandon Taubman ’07 watched from a luxury box at L.A.’s Dodger Stadium as the Houston Astros completed a dramatic, seven-game World Series triumph. When the last out was made, Taubman’s first move was to kiss his wife. His second: a handshake-turned-hug with Astros general manager Jeff Luhnow, who’d hired him four years earlier and later promoted him to senior director of baseball operations and analytics. Then Taubman rushed down to the visitors’ clubhouse to join in a champagne-drenched celebration. For a guy whose baseball career peaked with the junior varsity at Long Island’s Syosset High School—and whose previous “team” was the equity derivatives crew at Barclays Investment Bank—it was a surreal moment. 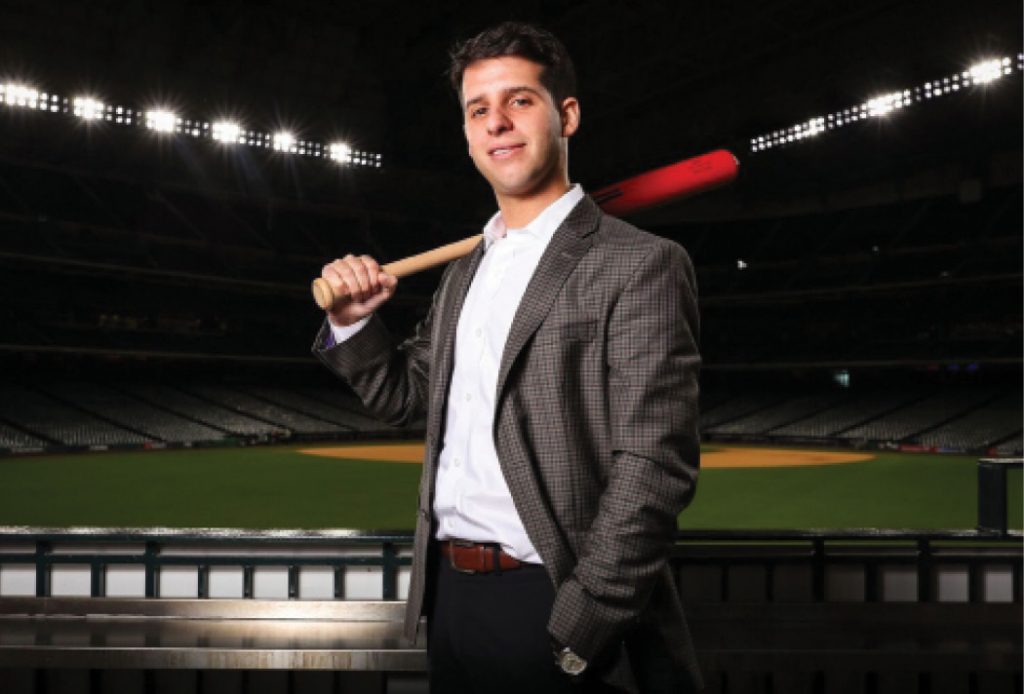 If Houston’s title was unlikely—it was the franchise’s first championship in its fifty-six-year-history—Taubman’s part in it was equally so. After majoring in applied economics and management in Cornell’s Dyson School, he’d begun an investment banking career in Manhattan with Ernst & Young before moving on to Barclays. Meanwhile, as a side gig, he and another number-crunching pal made extra money by playing fantasy baseball online—gaining a big advantage by creating a complex model that predicted which players had the best chance for success, even factoring in subtleties like how weather and certain umpires influence hitting and pitching. When Taubman heard about an opening for an analyst position with the Astros, he figured he had experience both in finding value in commodities and in using baseball stats as predictive tools. Why not take a swing at it?

During the lengthy application process, he was interviewed by scouts and player-development personnel; he examined case studies describing various players’ ages and performance and determined what kind of contract he’d offer them; he even had to answer a series of essay questions on topics like whether top players should be signed to big free-agent deals. In June 2013, Luhnow offered him the job. His original title was “economist, baseball operations,” which essentially meant aiding the assistant general manager by applying his valuation and analytical skills to contracts and roster decisions. The post required a significant pay cut and relocation to Texas—two more reasons why he gratefully embraced his wife, who’d willingly made the move to support his dreams, after the World Series victory—but he feels lucky to have made the leap to the big leagues. “I see the stacks of résumés of people trying to get into baseball,” Taubman says, talking with CAM by phone this winter from his office adjacent to Houston’s Minute Maid Park, “and I realize that there is a robust market of smart people who would love to be doing what I’m doing.”

When Taubman joined the Astros, the team was at rock bottom, having averaged a dismal 54-108 record over three years. But in 2014, Sports Illustrated put them on the cover, presciently declaring them “Your 2017 World Series Champs.” Why the bold prediction? Because Houston was stockpiling talent, both on the field and in the form of its front-office analytics crew (many of whom, like Taubman, had degrees from elite universities). He and his colleagues nicknamed their research-and-development squad the “Nerd Cave”—and after the Astros did indeed win the 2017 Series, the Washington Post called it “the moment the analytics movement conquered the game for good.”

In Taubman’s current role, which he assumed in August 2017, he influences roster and contract decisions during trade negotiations and arbitration hearings. But he spends most of his time overseeing the R&D department, which has grown to nine people. The Astros’ process might be described as next-generation Moneyball, maximizing both dollars—their payroll was more than $100 million below that of the Dodgers—and performance. Whereas the book (and movie) Moneyball described a combative relationship between the Oakland A’s old-school scouts and its number-driven stats analysts, the Astros’ goal is synthesis. The team combines qualitative analysis with reams of quantitative data gathered through cutting-edge technology—from a high-speed video camera in the bullpen that measures a pitcher’s launch angle to wearable gadgets that gauge a batter’s swing speed. The key, Taubman says, is finding new ways to translate such information into reliable assessments. “The old way of looking at a season’s worth of performance data and using that to predict the future is kind of obsolete,” he says. “We get tens of thousands of rows of data—about every swing, every pitch, every fielder movement—and we need to decide what to do with that information.”

Much of this data objectively captures what scouts have measured more subjectively for decades, Taubman notes—so the two camps complement each other, making for solid teamwork. “We’re all speaking the same language now, and R&D’s job is to bring additional insights to the end users—the players and coaches,” he says. “The more we’re able to share information with these guys so they can proactively get better, the more success we’re going to have as an organization.” So the team uses data analysis to not only evaluate player performance, but to enhance it. This is where Taubman’s background in finance—establishing the value of something—may be most beneficial. He studies, for instance, which traits tend to make for a good pitcher and even which quantifiable factors make a pitch good. That’s why he strongly advocated for the team to sign an injury-prone, thirty-three-year-old journeyman named Charlie Morton before the 2017 season.

Morton had been cut by the lowly Philadelphia Phillies and had an unimpressive 46-71 lifetime pitching record—but Taubman’s job is to dig deeper into the numbers. He liked how the velocity of Morton’s fastball had increased after he rested his arm while recovering from a groin injury; he also saw an opportunity for Morton to change his strategy regarding where he placed his pitches around the strike zone. So at Taubman’s behest, the team signed Morton to a two-year deal. He not only went on to win fourteen games for Houston in 2017, but became the first pitcher ever to win Game Seven of both his league championship and the World Series.

Thanks to the winning team that Taubman helped put together by endorsing players like Morton, he’ll receive a World Series ring on April 3 before Houston’s second home game of the season. But he isn’t content to stop at one. “Our goal wasn’t to win a World Series,” he says. “It was to win multiple World Series.”