‘Mars time’: Cox delivering a TEDx talk on the discombobulating logistics of working on the rover team.Photo: TED talks

The bio for the TEDx talk that Nagin Ahmed Cox ’86 gave in late 2016—and which now has more than two million views—describes her as a “first-generation Martian.” A longtime spacecraft operations engineer at NASA’s Jet Propulsion Laboratory (JPL) in Pasadena, California, Cox has spent the last quarter-century helping to develop and run mission control systems for the space agency’s robotic explorers, including Galileo and three of the four Mars rovers. She works on designing the processes and tools—as well as training the staff—that fly NASA’s electronic eyes and ears to other planets and to outer space, where they gather data and send it back home. “The first Martians are the teams who are operating the rovers on Mars,” Cox says, “even though we live on Earth.” She’s currently at work on NASA’s next rover, planned to depart for the Red Planet in 2020. To the oft-asked question of why she never aimed to be an astronaut, Cox replies: “If you really want to go ‘where no one has gone before,’ it’s the robots that see a place first.”

The “Star Trek” allusion is no offhand remark; growing up in the Midwest in the 1970s, Cox was captivated by the TV space adventure, then airing in reruns. While most of her friends quickly moved on to Nancy Drew books and other pursuits, she found inspiration in the show’s vision of a multi-ethnic crew in which women played key roles. It was a particularly potent message for Cox, given that her conservative Muslim father, who’d emigrated to the U.S. from India, didn’t support her dreams of studying science or even going away to college. But by fourteen, Cox was fixated on working for JPL someday—thanks not only to “Star Trek,” but also to “Cosmos,” the PBS astronomy program that inspired so many kids to pursue STEM fields. “For a while, I had thought maybe I should write science fiction,” she recalls, “but then I thought, Why work on fiction when this is real?”

Just applying to colleges required a force of will. Confused as to why she hadn’t received information from any of the schools she’d queried, she discovered that her father had been intercepting the envelopes. She persevered, applying to more than a dozen schools and paying the application fees with money she’d earned; she ultimately funded her education through an Air Force ROTC scholarship. Cornell was always the front runner—because at the end of each “Cosmos” episode, it was listed as the home institution of host Carl Sagan. When it was time to leave for Ithaca, Cox—who’d never been on a plane by herself—got a friend to take her to the airport. “I had two giant suitcases and my bike,” she says. “I knew I could never go home.” 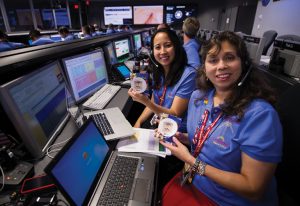 On the Hill, she double majored across colleges, earning degrees in psychology and in operations research and industrial engineering. She went on to six years of active duty in the military, during which she earned a master’s in space operations engineering from the Air Force Institute of Technology. She landed her dream job at JPL in 1993 and has been there ever since. (To this day, she writes “IWWTWTF” on the cover of each work notebook—a reminder, she says, that she wanted to be there so badly, “I was willing to wash the floors.”) The first mission Cox worked on was Galileo, which launched in 1989 to study Jupiter and its moons, arriving at the planet in late 1995. For that mission and every one since, she has felt a poignant emotional connection to the technological emissary she was helping to shepherd. “I would go outside and look up at the sky when she was struggling with [Jupiter’s] radiation belts and we had anomaly after anomaly,” Cox recalls. “I would say, ‘How are you? Hang in there, we’re trying to help.’ We all talk to our spacecraft and think about them. These are our babies. They are extensions of us. When we lose one, it’s like a knife to the heart.”

Cox’s work on the Mars rovers inspired her much-viewed TEDx talk, which included a crowd-pleasing description of “Mars time.” As she explained, a Martian day (known as a “sol”) lasts for twenty-four Earth hours plus approximately forty minutes. So to take full advantage of a rover’s time, she and her colleagues live and work on Mars time for several months at the beginning of each mission, shifting the start of their “morning” by about forty minutes a day. (Her husband, electrical engineering alum Earl Cox ’86, MEng ’91, helps out by covering their home’s windows to block out the light.) Since the rover is typically active only during sunlight hours, she and her team are on the Martian “night shift,” sending the rover commands to drill, drive, or perform other tasks when it wakes up the next morning. “We are living on Earth, but working on Mars,” she told the TEDx audience. “So we have to think as if we are actually on Mars with the rover.” They’ve developed an argot to distinguish between the terrestrial and Martian calendars—using, for example, “yestersol” and “solorrow” instead of yesterday and tomorrow. When Cox is on Mars time she even sports a second watch on her left wrist, one that has been specially altered to run more slowly. “I couldn’t possibly get tired of this,” she says. “I’m an explorer, and I love being on Mars. It’s everything my fourteen-year-old self hoped it would be.”

To inspire the next generation of scientists and engineers, Cox has given some 700 STEM talks over the past two decades—not only around the U.S. but in countries like Jordan, Morocco, and Pakistan. “There are always people who will tell you that you can’t do something because of your gender, race, or ethnicity,” she says. “In some small way, I want to share the message that yes, you can.”

One thought on “Defying Gravity”