More than a century after a Cornell president lost his job over granting honorary doctorates, the issue remains controversial with faculty and alumni

More than a century after a Cornell president lost his job over granting honorary doctorates, the issue remains controversial with faculty and alumni 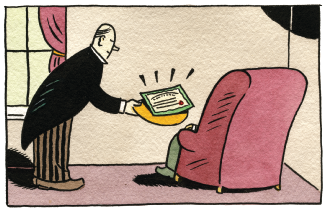 On May 14, the Faculty Senate met to consider a motion from Weill Cornell Medical College that would allow the college to award honorary degrees. The senate, which hasn't always managed to reach a quorum this year, had no trouble doing so at this meeting—because the motion proposed a break with one of the University's oldest traditions, namely that Cornell does not award honorary degrees.

Representing the Medical college were Professors Ralph Nachman, Jack Barchas, and David Hajjar, Weill Cornell's executive vice provost. The main reason they gave in favor of the motion was that they "wished to recognize outstanding intellectual achievements, creative accomplishments, and leadership in education, public service, medical ethics, or other appropriate sectors of society, both nationally and internationally." Noting that many peer institutions award honorary degrees, they requested an exception from Cornell's long-standing policy, saying that recognizing outstanding contributions is "consonant with the fundamental mission of the University." They argued that biomedicine "provides a particularly fertile field of significant and notable achievements, worthy of special recognition."

In the discussion of the motion, many Ithaca faculty begged to differ. Some speakers argued that it was presumptuous of the Medical college to claim this privilege for itself alone, saying that other fields were equally meritorious. Others suspected that degrees might be awarded simply as rewards for financial help, because the wording of the proposal was vague enough to allow it. Ultimately, the Faculty Senate voted overwhelmingly against the proposal: forty-seven opposed and four in favor, with six abstentions.

Some of the arguments made at the meeting harked back to those of 1886, when Charles Kendall Adams, Cornell's second president, reversed the no-honorary-degrees policy of his predecessor, Andrew Dickson White. Shortly after taking office, Adams awarded doctorates of law to White and David Starr Jordan, MS 1872, who was at the time the president of Indiana University and later became the first president of Stanford. (Ironically, the recipients themselves had gone on record in favor of the ban.) As the Cornell Alumni News noted in a 1901 editorial: "When President Adams came to Cornell from Michigan, where honorary degrees were granted—as at every other American institution except Cornell—he was ignorant of Cornell's peculiar pride in its own stand."

When the alumni discovered what had happened, they were incensed and submitted a petition to the faculty and trustees with arguments so powerful that the trustees reversed the policy and renounced honorary degrees "with no prejudice to those already awarded." The alumni—arguing that they were the most likely recipients of such degrees and thus deserved to have their voices heard—rejected such degrees on the grounds that they would devalue their own, earned by hard academic work. "The petition was printed and widely circulated," the Alumni News said in 1901, "and applauded by the whole world of American scholarship." The conflict, in large part, cost Adams his job; he was forced to resign in 1892.

My position at the recent Faculty Senate meeting was that these arguments were as relevant today as they were a century ago. While honorary degrees are not as common as they were back then—when many schools granted them as a way to raise their profiles and curry favor with politicians—nonetheless, a large majority in the Faculty Senate believes that they still present a danger. And looking at the results of a poll on the Cornell Alumni Magazine website, which ran more than six to one against granting honorary degrees, the alumni of today agree.