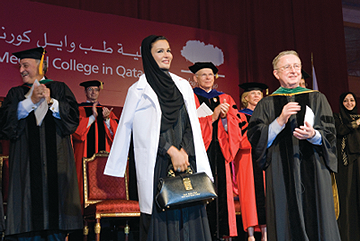 In a gesture that brought the audience to its feet for a round of applause, Sheikha Mozah Bint Nasser Al-Missned donned a white physician's coat and clutched a sleek black-leather doctor's bag during the first-ever commencement for Weill Cornell Medical College in Qatar (WCMC-Q). The elements of the physician's traditional garb were gifts to the Sheikha from the inaugural class of fifteen MDs, who received their degrees in a ceremony in a ballroom at the Ritz Carlton hotel in the capital city of Doha. The event marked a milestone in American higher education, as Weill Cornell became the first U.S. medical school to grant its MD on foreign soil. "At a time of ongoing and even escalating world tensions, Weill Cornell Medical College in Qatar is a most positive achievement far beyond the world of medical education," President David Skorton, himself a cardiologist, said in his address. Sheikha Mozah, wife of the Emir, was a driving force in the establishment of WCMC-Q through her work with the Qatar Foundation.

The nine women and six men in the inaugural class come from seven countries—Bosnia to Nigeria, India to Syria. Three of the graduates are from the U.S., while four are natives of Qatar, an oil-rich nation the size of Connecticut with a population of some 1 million, about a third of whom are citizens and the rest expatriate workers. "In today's world, education is considered a privilege," said class speaker Jehan Al Rayahi, a Qatari who will do her radiology residency at Hamad Medical Corporation in Doha. "It requires both a strong ambition and the means to pursue it. My class had both."

Although the ceremony was held more than 7,000 miles from New York, it retained the traditional trappings of a Weill Cornell graduation. The new MDs wore carnelian gowns with green trim and entered the ballroom to the strains of "Pomp and Circumstance," followed by a parade of faculty in academic regalia. The event was attended by more than 600 guests, including Weill Cornell Dean Antonio Gotto and Board of Overseers Chairman Sanford Weill '55.

During the ceremony, Skorton hailed the project as a bridge between the people of the U.S. and the Gulf region. He lauded the graduates—who have done as well on standardized tests and in the annual residency "match" as their New York peers—for their "extraordinary commitment." The new MDs will train in a variety of fields, including family medicine, internal medicine, surgery, obstetrics and gynecology, emergency medicine, neurosurgery, and anesthesiology; several will stay in Qatar for residency, while others are bound for such institutions as Johns Hopkins and NewYork-Presbyterian. Skorton concluded his speech with a charge to the new MDs: "Accept your responsibility as physicians to be a true partner with your patients: to prevent, diagnose, treat, and often cure disease, but always to comfort, always to empathize with the patient and the family, always to remain humble and grateful." 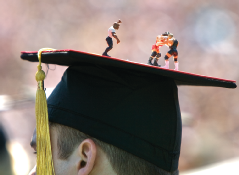 The cadence of verse marked Cornell's 140th commencement under cool, sunny skies. The University's 6,000 newest graduates listened as President Skorton opened and closed his speech with a poem musing on the meaning of "university," from "a place of wonder" to "a call to action." He expanded on that theme, encouraging the Class of 2008 to join the University in serving the public good. "I believe we have a responsibility to give back by bringing the fruits of our research to the public, side by side with pursuing knowledge for its own sake," he said, "and by cultivating in our students the social responsibility that will enable them to continue their efforts after they earn their degrees."

Poet Maya Angelou spoke at Senior Convocation the day before, telling the class that courage is the most important virtue, because no other virtues can be practiced without it. She closed by reciting lyrics to a song she had written after witnessing a stranger spit on two young people on a London street corner. Challenging her audience to try for a week to refrain from using "racial pejoratives" and "sexual bashing" terms, she said, "It is up to you. So much is up to you."

Provost Carolyn "Biddy" Martin has accepted the top job of chancellor at the University of Wisconsin, Madison. The move ends Martin's twenty-four-year career at Cornell, where she held her first academic post. A professor of German studies and women's studies, Martin has been Cornell's provost—its chief officer of academics and operations—since 2000. Martin knows Madison well, having earned her doctorate in German literature there in 1985. As chancellor of the 41,000-student university, Martin's responsibilities will include ensuring its re-accreditation in 2009.

Stephen Weiss '57, one of the University's foremost benefactors, died April 16 of heart failure. During his twenty-four years on the Board of Trustees, including eight as chairman, Weiss helped select four Cornell presidents and create the Weill Cornell Medical College Board of Overseers, of which he served as inaugural chairman. "Steve was a most engaging person who had a knack for seeing the opportunity in every situation," President Skorton said shortly after Weiss's death. "A consummate Cornellian, Steve leaves a long and broad trail that reveals his deep attachment to all things Cornell." More than 1,000 people packed a May 20 memorial service in New York City, where speakers praised his spirit and humor. His brother, Roger Weiss '61, JD '64, noted that Weiss once told Cornell benefactor Sanford Weill '55 that if he replaced the L's in his name with S's, "it would have a better sound to it." 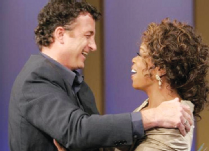 Big Win on 'Big Give'

Stephen Paletta '86, BS Eng '87, a real estate developer from Bedford, New York, won $1 million in April on the prime-time reality TV show "Oprah's Big Give." The former All-American lacrosse player spent eight weeks competing against nine other contestants to change the lives of strangers in creative ways. Paletta did everything from asking a crossing guard to give $100 bills to passersby to organizing a $100,000 fundraiser for the Chicago Hope Academy. The show lets Paletta keep $500,000 for himself and requires that he donate the rest.

Cornell has published a new strategic plan, its first since 1994. Thirty-three pages long, the document spells out tactics for reaching five overarching goals in the twenty-first century. Among them are: recruiting exceptional faculty and staff by boosting Cornell's rankings in some thirty fields to the top ten in National Research Council surveys by 2015; attracting the best students regardless of their ability to pay by increasing scholarships; and extending Cornell's public service by focusing on research that translates from basic science to real-world applications. The plan can be viewed online at www.cornell.edu/president/strategic-plan.cfm.

Fiction writer Melissa Bank, MFA '88, will be a visiting writer on campus in spring 2009. Her 1999 short-story collection, The Girls' Guide to Hunting and Fishing, was a New York Times best-seller. She will teach undergraduate and graduate seminars and give a public reading as part of her appointment. 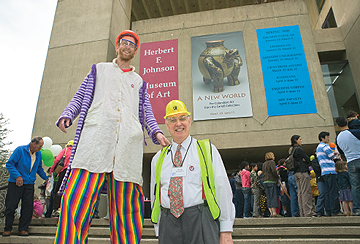 Peter Lepage and Stewart Schwab have been reappointed as deans of the College of Arts and Sciences and the Law School, respectively. The Board of Trustees reappointed them for five-year terms following recommendations by President Skorton and outgoing Provost Biddy Martin. Lepage's term began July 1; Schwab's will begin January 1, 2009.

William Ward, professor emeritus of communication, died April 27. He was a faculty member for sixty-three years, including twenty-six as department chair. In this role, he was instrumental in shaping what is now the Department of Communication, creating divisions for producing publications, visual aids, and radio, television, and film programs. He joined the faculty in 1945 as a full professor at the age of twenty-eight. His family has established a CALS scholarship in his name.

The Votes Are In

Five new members were elected to Cornell's Board of Trustees in March. Faculty tapped Rosemary Avery, professor and chair of policy analysis and management; staff chose Beth McKinney '82, director of the Wellness Program; students picked Michael Walsh, a doctoral student in biological and environmental engineering; and alumni elected Elizabeth Altman '88 and Ronni Chernoff '67. Their terms began July 1. Cornell is the only Ivy League school—and one of the few universities in the country—to include student, faculty, and staff as voting members on its board.

Cornell is teaming up with Saudi Arabia's King Abdullah University of Science and Technology (KAUST) to create a research center for nanomaterials science and technology on the Hill. Funded by $5 million a year over five years through KAUST's Global Research Partnership program, the effort will be led by Cornell engineering professors Emmanuel Giannelis and Lyden Archer. The center will be one of four KAUST partner sites for science research; the others are located at Oxford, Stanford, and Texas A&M. It will focus on nanoparticle ionic materials (NIMs), a new class of hybrid nanomaterials discovered at Cornell, which have potential applications for emerging technologies in such fields as water desalination and solar energy.