In 1951, a young Massachusetts senator named John F. Kennedy went on an ambitious geopolitical junket to strengthen his foreign policy credentials. His priority stop was Indochina, a volatile region returned to the French colonial empire at the end of World War II. Kennedy’s analysis of the situation was prescient—and grim: France would lose its tenuous grip on Vietnam; it was only a matter of time. But ten years later, then-President Kennedy contradicted his own beliefs by launching a covert war in Vietnam, in large part to compensate for France’s capitulation to an alleged communist state. 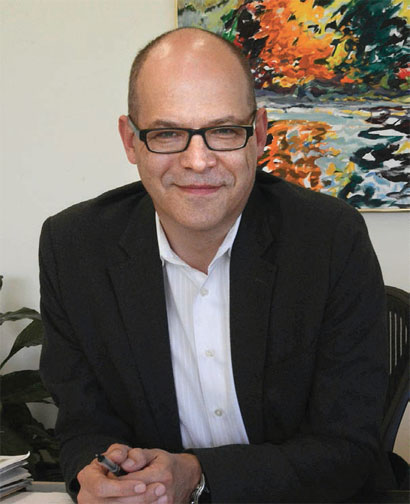 The nature of the U.S. paradox, repeated by French and American leaders alike, is the through line of Professor Fredrik Logevall’s book Embers of War: The Fall of an Empire and the Making of America’s Vietnam. “JFK saw what would come to any Western power that got involved militarily in that part of the world,” says Logevall, whose book was awarded the Pulitzer Prize in April. “And yet, as president in 1961 and ’62, he decided to deepen our involvement, despite his doubts.”

Kennedy’s decisions were based on domestic pressures at the time, notes Logevall. Any study of the incipient American conflict must consider the specter of the Korean War that dogged the U.S., as well as the influence of McCarthyism and Democrats’ fears of being branded as soft on communism. But though their motives were complex, the fact remains that our leaders consistently followed the well-worn path of the French: knowing the wiser course, they took up arms nonetheless. “Writing Embers of War was important for me because even though I’ve studied Vietnam for twenty-five years, I still have questions about it,” says Logevall, whose previous book, Choosing War: The Lost Chance for Peace and the Escalation of War in Vietnam, details American policymaking in the early Sixties. “How is it that the U.S., under Eisenhower, built up and sustained a noncommunist bastion in South Vietnam, saying, ‘We can succeed where the French have failed’?”

In its review of Embers of War, the Christian Science Monitor compared the book to a Greek tragedy: “Even though readers know how the story ends—as with The Iliad—they will be as riveted by the tale as if they were hearing it for the first time.” But unlike in classical literature, few heroes emerge; there is no catharsis, only the bitter recitation of facts. By 1973, 58,000 U.S. servicemen and women, as well as some three million Vietnamese, were dead. A third Indochina War followed, with Vietnamese forces fighting both the Chinese and the Cambodians. “They all had grave doubts,” Logevall says, “and yet they continued, year after bloody year, to perpetrate, perpetuate, and escalate.”

For modern readers, there are obvious analogies to America’s current conflicts, intelligence snafus, and foreign policy debacles. As history professor emeritus Walter LaFeber writes: “More than a half-century later, and a decade after 9/11, it remains true that the more things change, the more they remain the same—at least to those ignorant of the story Logevall tells.”

Embers of War opens with Ho Chi Minh’s doomed effort to plead the cause of Vietnamese independence with Woodrow Wilson at the Versailles Conference in 1919; he is shunned. Still, in World War II, Ho worked alongside the Office of Strategic Services (OSS), the forerunner of the CIA. Despite cooperating with the Allies—as both an “honorary” OSS agent and as the leader of Vietnamese forces fighting the Japanese—Ho was branded a communist, his calls for independence viewed as a threat to the West. Against tremendous odds, Ho’s ragtag Democratic Republic of Vietnam forces humiliated the French garrison at Dien Bien Phu. That protracted and bloody siege is the stuff of legend: it stands as one of the few examples of an Asian power annihilating European colonialists in battle. The French defeat led to their withdrawal from Indochina and the partitioning of Vietnam into North and South, orchestrated by Eisenhower. Why didn’t it end there?

To entertain that question, Logevall took the long view, tracking the Vietnam conflict to its European colonial sources. “Teaching about the colonial period and the French Indochina War made me more determined to go back to the struggles’ origins, to Ho Chi Minh and World War I, to the interwar period, and especially to World War II,” says Logevall, director of the Mario Einaudi Center for International Studies. “I told my students, ‘The French war connects in important ways to the American war.’ Yet I realized I had much to learn about the nature of those connections.”

Getting to the heart of the matter was made more challenging by Hanoi’s continuing unwillingness to grant scholarly access to high-level documents. Despite such limitations, scholars and reviewers say, Logevall’s book is a major achievement that fills a conspicuous vacancy in Cold War scholarship. As the New York Times stated: “He has produced a powerful portrait of the terrible and futile French war from which Americans learned little as they moved toward their own engagement in Vietnam.”

Four decades ago, many young Americans subject to the draft felt a similar air of poignant fatalism. As the anti-war rock band Country Joe and the Fish summed it up in song:

And it’s one, two, three, what are we fighting for?
Don’t ask me, I don’t give a damn—next stop is Vietnam.