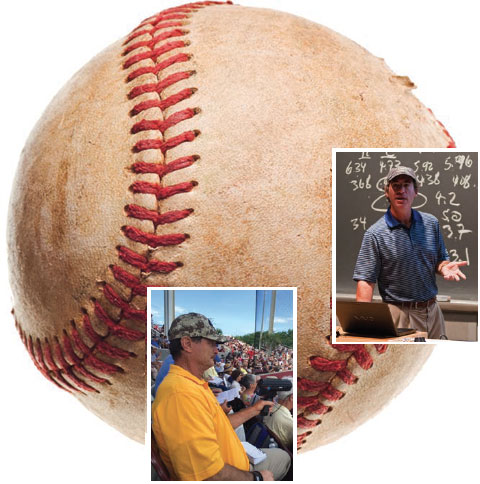 For more than twenty years, Marlin McPhail ’82 has been a scout for the New York Mets, focusing on high school and college players who might become pro stars. A former second baseman, McPhail broke Big Red records before spending ten seasons in the minor leagues, half of them at the highest (AAA) level.

Mitchel Lichtman ’80, on the other hand, is a professional sabermetrician. The term, made famous in the book Moneyball, comes from the acronym SABR, for the Society of American Baseball Research; sabermetrics is advanced empirical analysis of the game. Lichtman, who never played baseball beyond high school, has worked for the St. Louis Cardinals, consulted for other teams, co-authored The Book: Playing the Percentages in Baseball (a seminal tome about managerial strategies), and created a new defensive metric known as Ultimate Zone Rating.

When it comes to evaluating players, there has long been a perceived conflict between their two worlds—between the people who crunch the numbers and those who “beat the bushes.” But in recent years, that clash has evolved into coexistence; in fact, every major league team now has its own analytics department. In April, as the season got into full swing, CAM put the two alums together for a chat.

CAM: Compared to the typical fan, is there something peculiar about the way you watch a game?
Marlin McPhail: I’m always looking for different angles, and I don’t always watch the ball. You can find me at a high school game out behind the fence, standing behind an outfielder to see how he reacts; I might just watch the way a hitter runs or what kind of turn he makes around first base. Of course, I like to know where the ball lands—especially if it goes over the fence.
Mitchel Lichtman: I watch a game less casually than most fans. I obsess over managerial decisions. Who does he bring in to pinch-hit? What does he do with his starting pitcher? I’m very much an observer of pitching. How does he optimize his sequence and randomize his pitches enough to keep the batter guessing?
McPhail: I’d enjoy watching a game with you, because there’s still a lot of player and coach in me, and I watch that way, too. I probably do too much of it. In fact, as a player, people used to tell me, “If you stopped analyzing yourself, you’d probably do a little better.”

CAM: A common notion is that baseball was slow to accept analytics because the sport is largely run by former players who are wedded to doing things the old-fashioned way. True?
Lichtman: For years, management was self-propagating from a player pool, which doesn’t happen in any other industry; McDonald’s doesn’t have people who retire from working the cash register and then become the CFO. But in sports that’s often the way it works, and that can be a barrier to technological progress. All of the pioneering work that was done in analytics was done by people outside the baseball industry, but at some point the industry realized it had to get on board.
McPhail: In any business, it can be hard for the people on the inside to see its flaws. Moneyball tells the story of how [Harvard alum] Paul DePodesta was brought in by [Oakland A’s general manager] Billy Beane, who wanted to try something new, and they had success. When people see success, they’re willing to do it.

CAM: In evaluating pros­pects, is there still room for gut instinct?
Lichtman: What is a gut feeling? It’s really just internal processing of information by a trained observer. Let’s face it: that aspect of scouting and decision-making is happening less and less because of access to more information, data, and technology. So it’s becoming a dinosaur. But is there still room for it? Sure.
McPhail: I think the further you get from the big leagues, you find more gut feelings. Granted, feelings sometimes can fool you. So I think there’s room for it, but you should be able to explain why.

CAM: In Moneyball, Michael Lewis wrote that evaluators who trust analytics believe that a young player “is not what he looks like, or what he might become, but what he has done”—whereas the traditional baseball man derides that as “perform-ance scouting.” Is that still a bone of contention?
McPhail: To some degree. In the major and minor leagues, players are generally competing against the same level of talent, so you’re looking at their body of work against their peers. But at the college and high school level, you almost have to get down to, for instance, “How do guys perform on Friday night against the other team’s number-one starting pitcher, versus on Sunday against a less-skilled pitcher?” I’m okay with comparing numbers, but the numbers can be generated in different ways.
Lichtman: A good analyst not only generates statistics, but also accounts for context. Even ten or twelve years ago, when we were doing work on evaluating college players for the major league draft, we were among the first people to take those numbers and adjust them for the quality of the opposition, the conferences they were playing in, the parks they were hitting in.

CAM: Mitchel, you’ve been quoted as saying, “Human observation is terrible at quantifying things. That’s why we have statistics.” But can analytics learn anything from scouting? What attributes can’t be measured in numbers?
Lichtman: Scouting is important in terms of work ethic. The numbers can’t tell us if a player is going to work hard and improve his game as he gets older and moves through the ranks. Does he have the mental makeup to handle the pressure? And numbers only show a sample of a player’s performance. There’s luck and randomness, and that can fool us. We want to reduce the noise in the numbers, and scouting becomes critical there.

CAM: So Marlin, if analytics had been more a part of the game when you were playing—and getting on base about 35 percent of the time—do you think you might’ve had a shot at the majors?
McPhail: That’s hard for me to answer. When I look back and compare myself to others guys at that time in the big leagues, it just frustrates me. So maybe I’ll let Mitchel answer that one.
Lichtman: I was just looking at the stats, and you had decent numbers, Marlin. Your prospects would probably hinge on your defense. You played all over the field in the minor leagues. What was your primary position?
McPhail: I actually played every position—but I never was really good at any of them.