In May, the news broke that star Natalie Portman will play Supreme Court Justice Ruth Bader Ginsburg ’54 in On the Basis of Sex–a film about Ginsburg’s work as a crusading attorney in landmark gender discrimination cases–and that French actress Juliette Binoche will have the title role in Pearl, an upcoming biopic about Good Earth author Pearl Buck, MA ’25.

They’ll join a roster of Cornellians who’ve been portrayed in TV and film over the years, from Oscar-winning prestige pictures to movies-of-the-week. Can you think of any performances that we’ve missed? What other alumni and faculty deserve the star treatment—and who should play them? Go to this story at cornellalumnimagazine.com and weigh in.

Sandy Berger ’67 – Kevin Dunn
In the 2006 TV miniseries “The Path to 9/11,” the Clinton-era National Security Advisor was played by Kevin Dunn.

Mark Whitacre, PhD ’83 – Matt Damon
Whitacre was the protagonist of The Informant!, Steven Soderbergh’s acclaimed 2009 black comedy about the biochemist’s eccentric stint as a corporate whistleblower. Matt Damon got a Golden Globe nomination for the role. 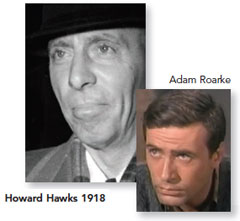 Howard Hawks 1918 – Adam Roarke
The famed director (His Girl Friday, The Big Sleep, Gentlemen Prefer Blondes) has been portrayed several times in TV movies about classic Hollywood. They include “Bogie” (1980), “Rita Hayworth: The Love Goddess” (1983), and “Norma Jean & Marilyn” (1996). Hawks was also a character in the 1978 theatrical release Hughes and Harlow: Angels in Hell, played by Adam Roarke.

Leo Frank 1906 – Will Janowitz
The tragic tale of Frank, a Jew who was lynched in Georgia after being unjustly convicted of murdering a young girl, has been dramatized multiple times. It was the subject of a TV miniseries (1988’s “The Murder of Mary Phagan,” where he was played by Peter Gallagher), a film (2009’s The People vs. Leo Frank, with Will Janowitz of “Boardwalk Empire” in the role), and a musical (Parade, which opened on Broadway in 1998 and won two Tonys).