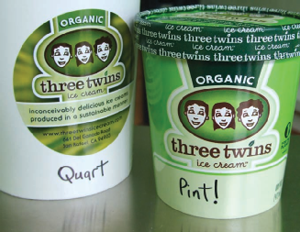 If a business philosophy could be encapsulated by an ice cream flavor, it would be this one: Mocha Difference. It's coffee ice cream with flecks of dark chocolate— one of the offerings at Neal Gottlieb's Three Twins Ice Cream shops in the San Francisco Bay Area—but the name is also a nod to the owner's sustainable sensibilities. Gottlieb '99 runs the nation's first chain of organic ice cream shops.

At Three Twins, the walls are green, the pint containers are green, and, most arrestingly, Gottlieb's sneakers are green. ("I believe in personal branding," says the New Jersey native. "If you wear green shoes, people remember you.") However, it's the business's green philosophy that has grabbed the most attention. The milk comes from cows nurtured on pure feed or grass—no hormones or antibiotics. The vanilla comes from orchids that aren't treated with herbicides or pesticides, and there are no artificial colors or flavors. "The intent is to have the purest, most natural product," says Gottlieb, who donates a portion of sales to grass-roots environmental organizations as a member of One Percent for the Planet.

The company's production machines are sanitized with chemicals approved by the National Organic Program. Even the utensils are compostable: the serving spoons are biodegradable potato-based products, and the cups are made from the residue of crushed sugar cane. Gottlieb says that the spoons are four or five times more expensive than plastic ones, and the ice cream ingredients cost him on average about twice as much. Currently, he sells pints for $6, although his goal is to bring them into the $4.50 range, comparable to Ben & Jerry's. To that end, he has raised funds to build a factory in Petaluma, forty miles north of San Francisco. "We'll go from being able to produce fewer than a thousand pints per week to a couple million per year," he says. 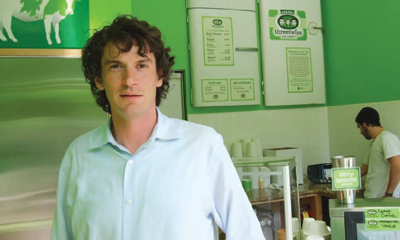 Not bad for a guy who opted out of business school. After a job in corporate finance and a Peace Corps stint in Morocco, Gottlieb was accepted by the Johnson School, but didn't receive the Park Fellowship he'd expected. "I didn't want to get stuck in a cubicle, paying off student loans," he says. So he took a business course in San Francisco while starting his own company; ice cream seemed a tasty choice. "It appeals to all," says Gottlieb. "It's a great outlet for creativity. It's fun. And the start-up costs are relatively low, but from there you can scale up." At the time of the company's creation, Gottlieb was sharing a house with his fraternal twin brother Carl (a computer engineer who is also a 1999 Cornell grad) and Carl's wife, Liz, who is also a twin—hence the name.

But whimsy didn't necessarily translate into profitability. The first Three Twins store was launched in 2005 in a former taquería in San Rafael, a Marin County location where foot traffic was almost nonexistent. "To get there," he says, "you have to go by another ice cream shop that's been open about forty-four years." On top of that, construction delays forced him to debut on August 27, a bad omen for a business largely dependent on summer weather. The sole employee, Gottlieb would make ice cream in the morning, tend shop until closing, clean up, then do bookkeeping—working some ninety hours per week. On one particularly cold and rainy Monday, he grossed $49.

Gottlieb judged that survival depended on launching a wholesale business, and he made his first sale to a San Francisco café—three tubs of Madagascar Vanilla. He now sells to some forty locations, including Whole Foods, which has allowed him to open two more Three Twins shops, at the Oxbow Public Market in Napa and on Fillmore Street in San Francisco's Lower Haight district. The latter location, less than a block away from a couple of medical cannabis dispensaries, is by far the most profitable.

Gottlieb rotates more than 100 flavors, and their creation offers an opportunity to flex his creative muscles. So you might discover a tub of Mint Confetti (mint ice cream with flecks of dark chocolate) or Cookie Jar (vanilla with three types of cookies) or Strawberry Je Ne Sais Quoi (strawberry with a splash of balsamic vinegar). "It's important that we're organic, but I don't think we're going to win by shoving that message down consumers' throats," he says. "You want to shove inconceivably delicious ice cream down their throats. Then they'll get a warm, fuzzy feeling about the green side of things."