On a sunny afternoon in June, the parking lot of a far-flung Vet college building — a former poultry research facility on a grassy hill a few miles from campus — is clogged with cars, the vehicles overflowing onto the adjacent road. Inside, it’s a hive of activity. In the corner of one room, several volunteers stand at a table sorting piles of silverware into sets; nearby, others package delicate glassware for transport. Inside a room labeled “Soft Storage,” a woman throws a bag full of bedsheets onto a precarious mountain of pillows and blankets that reaches almost to the ceiling.

“Imagine the biggest garage or yard sale you’ve ever seen in your life.’

Down the hall, another space is lined with large, overflowing boxes marked “Women’s Shirts,” “Sports,” “Men’s Tops,” “Toys,” and so on. A “Holiday” box is laden with Easter baskets, small Christmas trees, and Halloween candy carriers. At the center of the room, a pair of Cornell staffers — human resources employees taking part in a group volunteer day — are unloading large plastic bags filled with yet more items. “A shot glass and a coffee mug,” Kelly Wagstaff, an HR program manager, notes with a smile. “That’s pretty typical.”

Welcome to the annual Dump and Run sort. Each summer, from early June to mid-July, an army of volunteers combs through vast piles of donated materials — this year, some thirty-three tons — primarily gleaned from Cornell students offloading unwanted possessions as they move out of apartments and dorms. The program, which coordinator Karen Brown calls the largest of its kind in the country, is a hybrid fundraiser, conservation effort, and massive rummage sale. 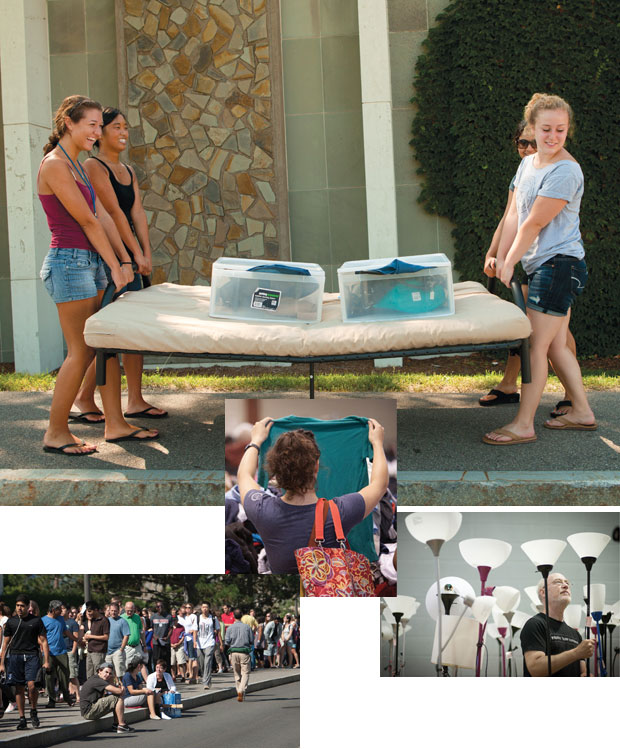 During Orientation Weekend each August, the donated items — minus just one dumpster’s worth of junk that’s sent to the landfill, plus other things (like half-empty toiletries) that are donated to charity — are sold at a two-day event in Helen Newman that attracts freshmen, returning students, locals, and bargain-hungry parents alike. “Imagine the biggest garage or yard sale you’ve ever seen in your life,” says Brown, director of marketing and communications for Campus Life. “People start lining up at five in the morning or so on Saturday. They just move through the gym like locusts. It’s really intense.”

The items available at Dump and Run range from the practical (some 200 minifridges, each priced at around $30 to $45) to the indulgent; Brown recalls a pair of never-worn Jimmy Choo heels on offer for a song in the sale’s “Designer Corner.” There’s furniture; clothing for all seasons; appliances like lamps and rice cookers (each tested to make sure it works); seemingly endless bunches of hangers; stacks of full-length mirrors; and much, much more. In the market for an inflatable palm tree or a Halloween costume that mimics a straightjacket? Dump and Run can hook you up.

Founded in 2003, the event has grown steadily, from $5,200 in sales its first year to more than ten times that much in 2014. In addition to diverting tons of waste from landfills, Dump and Run raises money for local nonprofits, who are compensated according to how many hours of volunteer labor their members provide. One regular recipient is Cops, Kids, and Toys, whose vice president, Tompkins County probation officer Bill Apgar, helps run the sort. “Anything that a college kid has, we end up with it at some point,” says Apgar, standing out back next to seven red trailers packed with yet-unsorted donations, as rubber-glove-clad workers scrub down minifridges in the sunshine. “I think people would be surprised by the volume of it. Everyone who’s been up here has been like, ‘Oh my God.’ “

Each spring, as the academic year is winding down, Dump and Run provides plastic bags that students (and anyone else) can fill with their castoffs and leave at designated spots around campus. That can make a particular bag something of a snapshot of undergraduate life. Unloading one in June, Wagstaff pulls out a jumble of items including a body pillow, an unused toiletry case, a black corduroy jacket, and the aforementioned shot glass and coffee mug. A small notebook labeled Cornell Engineering bears just one page of writing, including a practical question: “What can a PhD do for me?”