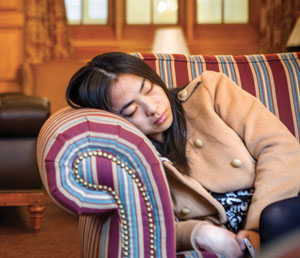 Do you sleep late on the weekends? Then you’re probably not getting enough rest overall –and you’re not alone. According to a 2014 National Sleep Foundation poll, 45 percent of Americans say that sleeping poorly or not enough affects their daily lives. Each year, hundreds of these exhausted folks find their way to Dr. Ana Krieger. An associate professor at the Medical College, the Brazilian-born pulmonologist is medical director of the Weill Cornell Center for Sleep Medicine, one of the nation’s largest academic sleep centers.

This summer, NewYork-Presbyterian/Weill Cornell became the first hospital in the city to offer a new implantable device to treat sleep apnea. How does it work?

It has a defibrillator-type of wire that travels underneath the skin from the chest and into the neck. Every time the chest muscles breathe, it stimulates the tongue to make it contract, opening the space at the back of the airway.

How significant is the new device in battling apnea, which afflicts 18 million Americans?

It’s very important, because it’s the only new treatment that offers an alternative for patients who have failed with CPAP [a breathing machine and face mask that’s often prescribed for the condition]. However, it’s limited to a select number of patients with a particular severity of apnea who are not obese. They can’t have mild disease, and they must have tried and failed CPAP first.

How much sleep do Americans get, anyway?

Most people sleep between six and seven hours on a workday. The National Sleep Foundation‘s recommendation for adults runs between six and nine hours, and we can see from the average sleep duration of adults in America that people are getting less than what is desired.

Are more patients seeking help from the Weill Cornell clinic?

We’re seeing three to five times more patients than ten years ago, and a younger population as well. We see a lot of issues when young adults move from high school to college, and also during the transition to the workplace. It’s difficult to adjust from staying up until two or three in the morning and sleeping until ten or eleven, to then getting a job where you have to get up at 6 a.m.

‘If you have to choose between a TV and a portable device, you should stick with the TV.’

Overall, why is sleep such a problem these days?

People now have less well-defined barriers between work and personal time, so they carry work into the evening. They’re often stressed with their schedules and responsibilities, and that makes it difficult to relax and fall asleep. At the same time, increasing rates of overweight and obesity have led to problems breathing at night due to obstructive apnea. 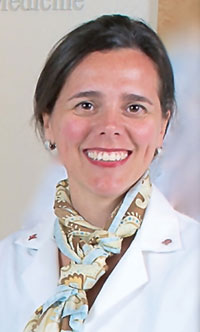 For people whose sleep problems are be­haviorally rather than medically driven, does technology play a big role?

It does. The use of electronic devices at bedtime often delays sleep onset due to several factors. People have all this information and entertainment available to watch in bed on devices that tend to focus their light emissions in the blue wave spectrum. Our eyes are very sensitive to that light and it can actually cause a shift of the circadian rhythm by stimulating areas of the brain that should be shutting down at night.

Should we all get rid of our bedroom TVs?

It depends. The general answer is yes — but if you have to choose between a television and a portable device, you should stick with the TV because it’s farther away and not as stimulating as using a device right in front of your eyes.

What are some tried-and-true tips for good sleep habits?

Keep a set schedule, and prioritize sleep like you do exercise or healthy eating. Stop stealing time from sleep to extend your day. Avoid trying to catch up on the weekends, so you’ll feel better on a regular basis instead of being miserable during the week. Don’t exercise or have a large meal within two to three hours of going to sleep. Avoid stimulus at night; at least for half an hour before going to sleep have a more quiet and relaxing routine, with less light. If you like to read, avoid anything too exciting.

Does sleep get enough respect? Some prominent go-getters — famously, former President Bill Clinton — have bragged about how little they get. As a society, are we over that?

Not yet, but we’re on the way. Unfortunately, we have heard that message from some successful people over the years — but there have been others who were proud of their sleep. Winston Churchill used to nap every day.