Doug Lasdon, JD ’81, entered law school for one reason: to do good in the world. His first job after graduation was as an attorney at Covenant House, the Manhattan-based charity that provides housing and other services for homeless youth. There, he was surprised to learn that New Yorkers in foster care had to leave the system once they turned eighteen, forcing many onto the streets or into shelters. Lasdon found a sentence in the relevant state law that he thought might aid those youngsters in their transition to independent living, but became frustrated when he wasn’t allowed to pursue the issue as part of his job.

Lasdon in Lower Manhattan, on the iconic steps of the Centre Street courthouse made famous on TV shows like “Law & Order”John Abbott

So he quit and founded a nonprofit called the Urban Justice Center, holding pro bono legal clinics at soup kitchens while spearheading a lawsuit on behalf of a group of homeless youths who’d been discharged from foster care. The suit led to a major change in the system, with the state Supreme Court ruling that the city must provide housing, supervision, and job training for those in foster care until age twenty-one. Talking with CAM last fall in the center’s offices in Lower Manhattan, Lasdon—sporting a black pullover bearing the slogan “Practice Law, Promote Justice, Change Lives”—notes that he never set out to start his own agency. “But I wanted to change things for the better,” he says, “and I realized I didn’t want to become part of a bureaucracy.”

Since then, the Urban Justice Center has made a difference for hundreds of thousands of New York’s most vulnerable residents, including the mentally ill, low-income veterans, victims of domestic violence, and even street vendors (most of whom are immigrants and people of color struggling to make ends meet and working under harsh conditions). It has gone from a one-man operation run out of a burnt-out building in East Harlem—Lasdon keeps a photograph of it on his office wall as a reminder of the organization’s roots—to a social justice powerhouse based in Manhattan’s Financial District. Today the nonprofit has more than 100 staffers (notable alumni include Cory Booker, a U.S. Senator from New Jersey and a former presidential candidate) who provide free legal aid, conduct advocacy work, lobby elected officials, and implement community education and outreach programs.

Sometimes their work requires fighting in court to protect their clients. With the help of organizations like the Legal Aid Society, the ACLU, and private firms, the center has argued cases over the years that have won the right for homeless married couples to remain in shelters together, protected immigrants seeking asylum in the U.S., and secured millions of dollars in new or improperly denied benefits for poor families. It also routinely pushes for legislation. For instance, the center’s Sex Workers Project helped pass the nation’s first law allowing survivors of sex trafficking to clear their records of prostitution-related crimes. (As Lasdon explains, trafficked individuals are often treated as criminals rather than victims; a record makes it hard for them to find legitimate employment and rebuild their lives.) “It’s all about justice for disenfranchised populations—people without a voice, people who are easily exploited,” says Lasdon, who also teaches poverty law and social entrepreneurship as an adjunct professor at Cornell Law School.

Asked to contemplate what drives his passion for this work, Lasdon says he isn’t quite sure what inspired such deep concern for the disadvantaged. The son of a businessman, he was raised in the upscale town of Scarsdale and spent his undergrad years at the University of Pennsylvania’s Wharton School. Yet Lasdon remembers being keenly aware of inequality at a young age. As a boy, he’d often visit his grandparents in New York City and pass underprivileged neighborhoods on the train ride there. “I’d look out the window and think, Why do those people live there, and I get to live where I live?” he recalls. He later spent five summers as a counselor at a sleepaway camp for children from low-income families, an experience he describes as eye-opening. By the time he entered law school he knew he’d never work at a private firm. “The value for me in helping people was much more exciting than the value of making money,” says Lasdon, who now lives with his wife and their six-year-old son on the Upper West Side. 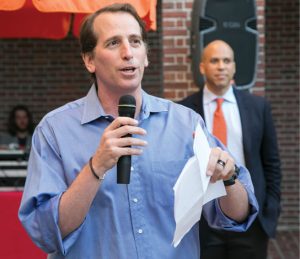 Lasdon (front) at the Urban Justice Center’s 2013 fundraising gala with U.S. Senator Cory Booker, who was a staff attorney at the center early in his careerClark Jones

The Urban Justice Center has a unique structure, serving as an umbrella for a wide range of projects. Typically, project directors raise their own funding and are largely autonomous, with the center offering office space and administrative support and sharing expertise and resources. Some projects, like those devoted to the mentally ill and to homeless LGBTQ youths, have stayed under the center’s auspices. But over time others have spun off into independent ventures, as the International Refugee Assistance Project (IRAP) did in early 2019. During more than a decade at the center, IRAP grew into a global force that has resettled tens of thousands of refugees, advocated for migrants displaced by war and natural disaster, and battled the Trump Administration’s travel ban denying entry to visitors from some Muslim-majority countries. In 2018 IRAP’s founder was awarded a MacArthur “genius” grant for her efforts. “I have spent years watching extraordinary people who were given the freedom and support here to do incredible things,” says Lasdon. “It’s a delight to be just a small part of their work.”

Though the center has acted as an unofficial incubator for decades, it recently formalized that role. In 2019 it launched the Social Justice Accelerator competition, selecting five early-stage advocacy projects to enter a two-year program designed to help them evolve into fully functioning nonprofits. The current class is tackling a range of societal ills—from the Brave House, which provides services for immigrant girls who have suffered trauma, to the College Athlete Advocacy Initiative, aimed at combating inequality and exploitation in the collegiate sports industry. “At the beginning we used to think, Let’s work ourselves out of a job,” says Lasdon. “That was naïve. Now our goal is just to do meaningful work on behalf of populations that are suffering.”