Above the Wings of Life salad bar at Ithaca’s Wegmans supermarket is a sign that’s instantly recognizable to Cornellians of a certain vintage; it hung in the Eddy Street window of Cabbagetown Café, the venerable restaurant that Julie Jordan ’71 owned from 1977 to 1991. The café, which closed in 1993, was much beloved as an affordable outpost of “vegetarian comfort food,” including the signature salad that Wegmans now sells—a hearty combination of greens, chickpeas, broccoli, brown rice, herbed tofu, olives, nuts, and cheeses.

For the past decade, the former College Scholar—who still lives in her childhood home in the nearby village of Trumansburg—has been working for Wegmans, developing vegetarian offerings for the supermarket chain’s vast and varied prepared foods department. Customers in Ithaca, as well as in the newer and more upscale Wegmans stores throughout the Northeast, can feast on such Jordan-influenced delectables as artichoke flan, Japanese-style grilled eggplant, shredded Brussels sprouts, and—the chef’s personal favorite—coconut cream kale. Jordan has published three cookbooks: Wings of Life, Cabbagetown Café Cookbook, and A Taste of Julie Jordan.

Cornell Alumni Magazine: Has a love of good food always been part of your life?

Julie Jordan: Dad was a dairy science professor at Cornell; Mom was a nutritionist who ran the school lunch program in Trumansburg. So I got it from both ends. My mother made sure we had tons of fresh fruits and vegetables. All our food was home-cooked. We weren’t allowed to drink soda. We really grew up eating beautifully. But we did eat huge amounts of ice cream.

CAM: Was that one of the perks of having a dad in dairy science?

JJ: My father would bring me along to tasting panels, because I had a good sense of taste and he’d educated me. One of the main things you taste for in ice cream is mouthfeel, and I was good at that. My dad and I shared a great love for vanilla ice cream, and people would send him premium vanillas from all over the world.

CAM: At Cornell, you concentrated on creative writing. How did you wind up a chef?

JJ: I realized that one does not get out of college and become a writer; you’d need another job to support you, and the jobs that came to me were all in food. My mother taught me how to cook, and I was quite good. I just found myself in restaurants. Around then I became a vegetarian.

CAM: Why did you stop eating meat?

JJ: I was living with vegetarians and eating vegetarian. At some point, I picked up a piece of meat and said, “Nope, I’m not gonna eat this anymore,” and that was it. It made so much sense to me, but it was never about nutrition. It was about eating animals, which is a horrific thing.

CAM: You spent time as the chef for the MacDowell Colony in New Hampshire. Were you already cooking vegetarian?

JJ: As soon as I became a vegetarian I wouldn’t cook meat anymore. I cooked there for a while, until enough of the colonists who wanted meat had a rebellion. So I cooked part-time, and they gave me a studio, where I started writing Wings of Life. Back then I felt like I needed to know if vegetarian food was good for you; now it’s the opposite, but at the time there was all this stuff about how you had to eat meat. So I started grad school in nutrition at Cornell. 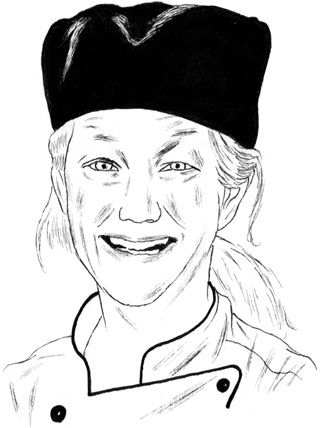 CAM: So how did you end up at Cabbagetown?

JJ: When I was judging the Great Bean Bake-Off, I felt this hand on my shoulder; it was one of the founders of Cabbagetown, which had been started by a group of idealistic people as a place to get good, nutritious food at low cost near campus. He said, “We want you to come cook at our restaurant,” and I thought, I’d much rather do it than study it. So I decided to take the leap.

JJ: It was the most fun on Earth. Everyone had a blast. We put out the best food you can imagine. It was all from local farmers. People who worked there were mostly Cornell and Ithaca College grads—bright, happy, upbeat people. We didn’t proselytize or anything; we just put out really good food that made people happy. People loved it there.

CAM: What were the most popular dishes?

JJ: Cashew chili. The enchilada del dia was a big one. “Mom’s Mac and Cheese.” The big salad bowls. We made our own whole-wheat bread every day, by hand. Soup, salad, and bread was always the biggest seller. When we started in 1977, it cost $1.65, and we always kept it cheap. Cabbagetown was always really down to earth—barn boards on the wall, wooden tables. A lot of my employees wore basically nothing; men would come to see the women because they were so beautiful and scantily clad. We always kept the kitchen open so people in the dining room could be part of the experience. We felt that college students were kind of divorced from reality and needed to get grounded, and a happy, bustling kitchen was a great thing to participate in. We also had a big, communal table—two picnic tables together—so people could sit down and meet each other, which seemed really important.

CAM: At Wegmans, you can affect the dietary habits of thousands of customers every day—far more than could have eaten at Cabbagetown. Is that one of the appeals of the job?

JJ: Actually, I felt that with Cabbagetown I had a huge influence on the whole country—the cookbooks, the employees, people coming and going. I wouldn’t say this is more influential than having one little restaurant. I think if you catch people’s attention, it spreads like wildfire.

CAM: You were a vegetarian long before it was fashionable. How have you observed dietary trends changing?

JJ: There’s been a paradigm shift in the last two to three years. Instead of being an outsider’s way of eating, vegan/vegetarian has become mainstream. People are trying to eat more that way, to have one or two vegetarian days a week. It just happened like that—bam.

CAM: Are you heartened by the fact that nowadays people can buy many meat-replacement products that didn’t exist twenty years ago?

JJ: There’s a whole industry in getting people to eat vegetarian by having stuff that tastes and looks like meat. Well, go ahead, but that’s not my thing. I think if you’re not going to eat meat, stop eating meat. Vegetarian food is glorious. Why do you need to imitate meat? Meat is second-rate.

CAM: What vegetarian food do you think meat eaters should try?

JJ: I think tempeh’s wonderful. It’s got all kinds of nutrients from the bacterial fermentation. It’s digestible and delicious. You can keep it frozen and cut it up and use it. I think it’s a food whose time is coming.

CAM: At Wegmans, you wear chef’s whites embroidered with your name. Do you get recognized?

JJ: Constantly. I’m kind of shy, and at Cabbagetown I could hang out in the kitchen and just go out when I wanted to. But working at Wegmans I’ve had to learn to be open with people, to accept their enthusiasm and enjoy it.

CAM: Do you miss running your own restaurant?

JJ: I loved it, because it was a direct, creative effort and I was in charge. I was the inspiration and the boss. The downside is that you’re responsible for everything. Money was always a big thing. If anything goes wrong, it’s your problem. There’s always equipment to be fixed. At Wegmans, the nice part is that I can go home and forget about it. When a machine breaks down, I call maintenance. If somebody doesn’t show up, it’s not all on me. There’s a lot to be said for that.

CAM: Have a lot of wistful Cabbagetown fans descended on the Wings of Life salad bar?

JJ: People recognized it, and then all the Cabbagetown customers started coming in. But it has also gained its own following. You wouldn’t believe that one little bar does as much business as it does. People say they just got into town on an airplane and the first thing they did was come here. It’s got a very nice vibe around it. It’s generous, it’s fun, it’s fresh—that’s the spirit of Cabbagetown.