City Year, a nonprofit that mentors at-risk kids, is a draw for many civic-minded young alums

City Year, a nonprofit that mentors at-risk kids, is a draw for many civic-minded young alums

When Jonathan Pomboza ’11 dons the tomato-red zip-neck pullover with CITY YEAR emblazoned across the chest in bold black letters, he’s expected to follow some basic rules. No smoking or drinking. Hold the profanity. No jaywalking. Don’t even chew gum. “The guiding principle is that you are a role model at all times you wear the uniform,” says Itai Dinour ’01, who heads the inner-city educational nonprofit that Pomboza joined after graduation. “You remember your first day at Cornell when they told you, ‘Don’t e-mail anything that you wouldn’t want on the front page of the New York Times’? Well, when you put on the City Year uniform, what would you not want one of your students to see you doing?”

Last fall, Pomboza began a ten-month stint at Newtown High School in Elmhurst, Queens, whose high dropout rate had put it on a list of “persistently lowest achieving” institutions. (In fact, the state Education Department ultimately closed the school, with plans to reopen it in the fall under a new name after a staff overhaul.) The former policy analysis and management major was outside the school at 7:30 every morning to greet the eight or so at-risk ninth graders he’d been assigned to mentor. During the day he was in class with them, helping them with coursework or just providing support and encouragement. Those who didn’t show up for school might well get a phone call asking them where they were. “It makes a huge difference when you know a student by name and say, ‘Joseph, you weren’t in math or English, but I know you were in science. What’s going on? Why didn’t you make it to class?’” says Pomboza, a Queens native who has signed on for a second year as a corps member. “And they’re like, ‘Oh my gosh—someone noticed.’” 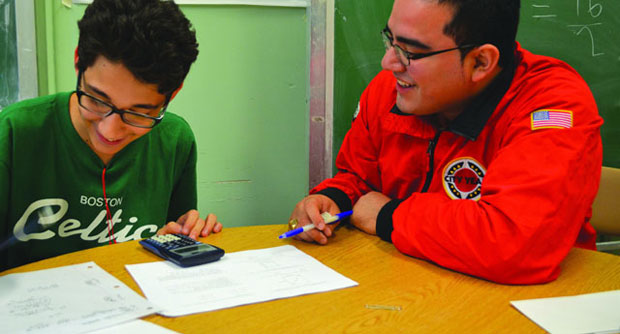 Founded by two Harvard law students in 1988, City Year aims to battle the dropout crisis by tapping young adults—most of them recent college graduates—to work with at-risk students in underperforming urban schools. Its staff cites research at Johns Hopkins that found that kids who are off track—having chronic problems with academics, attendance, or behavior—by the sixth grade have just a 25 percent chance of graduating high school.

The nonprofit’s pullover-clad staffers aim to buck those odds by working with students in the third to ninth grades, putting in hours that can stretch from the morning attendance bell to well into the evening. Its corps members, who receive a stipend and an educational grant, are aged seventeen to twenty-four—providing “near-peer” mentorship distinct from that of teachers or parents. Funded by the federal Americorps program as well as by corporate and private donations, City Year has sites in two dozen American cities, as well as in London and Johannesburg, South Africa. “There is amazing untapped potential in human capital,” says Dinour, an ILR alum who signed on after hearing one of City Year’s founders speak on the Hill and went on to help start the New York office, eventually becoming its executive director. “Imagine how different this country would be if every young person did a year of service.”

Cornell has been a major feeder school for City Year. Last year, eighty-five alumni applied to the program, with twenty joining it—making Cornell the number one feeder among private institutions and the fifth overall. Other Cornellians have served as City Year board members or been major donors. “I think it’s embedded in the ethos of the University, going way back to being a land-grant institution—this ethic of service,” says Dinour. “It’s a reason why Teach For America and the Peace Corps have an easy time recruiting on campus. I think that’s representative of who we are as Cornellians, as cheesy as that sounds.”

Carlos Mendoza ’08 joined City Year after earning an economics degree from the Arts college, working in a middle school in Long Island City, Queens. He stayed on for a second year and now serves as a program manager with the New York City office. “The reality is that some of our students don’t have parents who are pushing them or teachers who are investing in them,” says Mendoza, who emigrated from Nicaragua as a child and grew up in Florida and Georgia. “So when someone shows investment in them, it’s what they’ve been looking for—and waiting for—for years.”