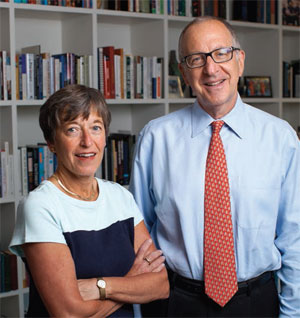 Retiring pair: At the end of the academic year, both Vice President Susan Murphy ’73, PhD ’94, and President David Skorton will be stepping down.

For the past thirty-seven years, virtually every Cornell undergraduate, and countless Big Red alumni, have benefited from some aspect of the work that Susan Murphy ’73, PhD ’94, has done. It has been the University’s good fortune to have her with us for so long in increasingly significant leadership roles.

Susan completed her undergraduate degree as a history major and, after earning two master’s degrees, returned to her alma mater—at the age of twenty-six—as associate director of admissions. She served as the Ivy League’s first female dean of admissions and financial aid for nine years while also pursuing her PhD in educational administration through the University’s employee degree program. Despite managing a staff of seventy and being on the road as much as a week out of every month, she was able to meet the demands of both endeavors through her extraordinary energy, talent, determination, and organizational skills.

Then-President Frank H. T. Rhodes conferred her PhD at Cornell’s 126th commencement in 1994, and a few weeks later she became the University’s first vice president for student and academic services. It was a position that Susan largely defined by bringing together essential “campus life” functions and virtually all other aspects of the student experience outside the classroom—including athletics, public service, Greek life, extracurricular activities, career services, and health and wellbeing.

Under Susan’s leadership, the University moved all first-year students to North Campus and created the “house system” on West Campus to better integrate living and learning into the undergraduate experience. Her experience, knowledge of Cornell, wisdom, and genuine concern for student welfare have helped us deal effectively as a campus community with difficult issues ranging from hazing to sexual violence to mental health and have brought us closer to being the diverse, inclusive, and caring community we aspire to be. Her perceptive leadership and attention to the many facets of the student experience have continued to serve Cornell and its students well; we look forward to completing the comprehensive update and expansion of the University Health Services facility in 2017, which is a long-standing strategic priority for Cornell and a project for which Susan has been a persuasive advocate.

Susan has a special gift for connecting with students directly: at athletic events; at office hours that she and I host jointly during the academic year; as a house fellow at Alice Cook House; as a mentor to Meinig Family Cornell National Scholars; and in many other ways—including convincing Robin and me to join her on North Campus during the first week of classes this fall for the ALS Ice Bucket Challenge, which raised funds to help combat that devastating disease.

A “double red” herself, Susan became even more connected to Cornell and its worldwide alumni through her marriage to the late Gerry Thomas, PhD ’78, and the experiences of her stepdaughters, who are also Cornellians. Her strong bonds to the greater alumni body are reflected in a Cornell Tradition Fellowship and the Murphy Lobby in Court Hall on North Campus, which were both named in her honor through the efforts and generosity of other Cornellians.

I have been so fortunate to have Susan on my senior leadership team. Her talent, perceptiveness, innovation, and judgment are simply unparalleled. Time and again, I have drawn upon her wisdom and insight, not only on topics that directly affect the student experience, but also on issues related to higher education on a national and even global scale.

Although Susan will retire from her current post at the end of the academic year, she will remain at Cornell through June 2016 in a new role in the Division of Alumni Affairs and Development, assisting with fundraising and alumni engagement. We will launch a national search for her successor, realizing that we have extraordinarily big shoes to fill.

Susan, your retirement is an opportunity to express our gratitude for all you have contributed to Cornell as a student, an alumna, an admissions and financial aid administrator, a dean—and, for the past twenty years, as a remarkably caring, innovative, and effective vice president. I can think of no one on our campus who is more universally respected and loved than you, or who has worked harder on behalf of the University. I thank you for all you have done—the Ice Bucket Challenge included—for Robin and me personally, for Cornell and its students, staff, faculty, and alumni, and for the wider world.