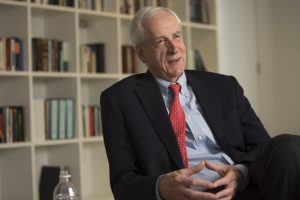 When people tell me that the American “system” of higher education is the best in the world, I respectfully disagree. There is no American system of higher education. In contrast to the situation in many other countries, American colleges and universities developed willy-nilly, by happy accident—from colonial seminaries such as Harvard, Columbia, and Yale—into the wide array of institutions in existence today. And that is a principal reason why we are so good.

America’s big tent of postsecondary education includes some 5,300 schools—two-year and four-year, public and private, church-affiliated and secular, land grant universities and liberal arts colleges—with varying missions and serving students of different interests and needs. Within this group are about one hundred research universities, including Cornell, that have secured American higher education’s reputation for quality around the world.

The first principle is academic freedom, which AAU defines as “the freedom of the university faculty to produce and disseminate knowledge through research, teaching, and service, without undue constraint.” Academic freedom does not give faculty members the right to indoctrinate students, but rather requires that they provide them with the freedom to acquire accurate knowledge and form independent judgments. Faculty members are held accountable by their peers and by society for the quality and rigor of their research and scholarship—and, as free as they may be to pursue their scholarly interests, they are nonetheless bound in all academic activities to comply with ethical standards.

The second principle at the heart of the academic enterprise is shared governance. While universities have adopted many structures for shared governance, there is a consistent pattern across American institutions. In general, the administration, led by the president, oversees the operation of the university, making day-to-day decisions and implementing institutional policies. The trustees have fiduciary responsibility for, and legal authority over, the university. The faculty has primary responsibility for all matters related to education and research, including the admission of students, the formation of the curriculum and of requirements for graduation, and the selection of research topics. At Cornell, we go further by having a designated number of trustees elected by specific constituencies—faculty, undergraduates, graduate and professional students, employees, and alumni—as well as by having a Faculty Senate and other constituent assemblies that provide guidance to the administration.

The third core principle, which makes possible the diversity of institutional types I mentioned at the outset, is a large measure of autonomy from government control. While all universities, public and private, are tied to government through federal financial aid policies, research grants, state funding of public universities, and other means, institutional autonomy remains, as the AAU noted, “a cornerstone of American higher education and a necessary condition to secure academic freedom.”

The public often does not fully appreciate how important these core principles are to the strength of American higher education. The exception that proves the rule is that in states with public higher education systems, flagship research universities sometimes suffer from being part of those systems because of the tendency of politicians to use inappropriate standards and criteria to set budgets, hire and fire university presidents, and determine policies that affect teaching and research.

In the run-up to the November election, all of us will be considering candidates’ platforms on critical issues—from immigration policy to climate change and international trade. Their positions on higher education should figure prominently on that list. These core principles are essential to American higher education’s continuing strength and to the great regard with which the world holds this system-averse “system.”